Around 50 Complexo do Alemão residents took to the streets on Saturday August 9 to promote peace in the community. Since the end of the World Cup, the favela complex has experienced shootouts on a daily basis between Military Police officers and drug traffickers.

The march was organized by Alemão residents to protest against continued police brutality and to raise awareness of the plight of local people who are caught in the crossfire between the Comando Vermelho gang and the occupying Pacifying Police Unit (UPP).

Three innocent people have been killed in the community since the end of the World Cup and dozens more have been injured by stray bullets or as a direct result of police violence.

On Sunday July 29, 60-year old Antônio França was shot and killed in Nova Brasília. And on Sunday August 3, 20-year old Rhuan Vianna was shot in the legs on a so-called ‘routine patrol’ police operation.

Victims of police violence, like 14-year old Zaqueu Nogueira, participated in the demonstration. Zaqueu was shot in Nova Brasília on Saturday July 27 by the Special Police Operations Battalion (BOPE) officers who accused him of being a drug trafficker. His only crime was being an Alemão resident. 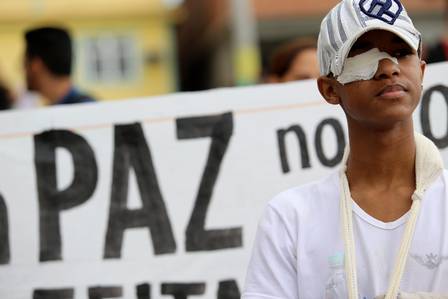 The teenager is now blind in one eye after being shot in the face by BOPE officers. He was also shot in the thigh and shoulder. Zaqueu protested against the criminalization of young people in the community despite the presence of heavily armed police stationed along the route.

“I am here today to demand justice and peace in the community. Lots of young people are being killed here. Innocent people are getting shot. I’m proud of my community and I just want things to get better for people here.”

Several demonstrators had lost family members to police violence. Denize de Morães, mother of the moto-taxi driver Caio de Morães who was killed during a protest in May, wanted to ensure that no other Alemão families would have to bury their loved ones.

“How far will this violence go? My son was killed by the police. He was an innocent man with nothing to do with trafficking. He was only 20 years old and worked as a moto-taxi driver. I don’t want to see anyone else’s children killed. I am here for justice and for respect. Today, we are here to stand up for our rights. We are a community, and we are much stronger than any UPP force or drug traffickers. We are living through some very difficult times but good will defeat evil–I am certain that we will overcome all this and see better days.”

The participants displayed banners criticizing the police occupation and sprayed graffiti on streets and properties calling for peace in the community. 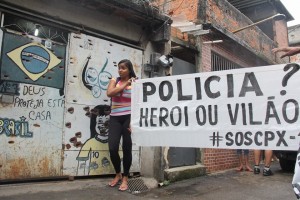 The march paused in a public square to read out the names of 15 victims of this year’s wave of violence and to pray for peace. The list included local residents and police officers. Marchers also stopped at strategic points to show the press where stray bullets had torn through walls and injured residents.

Along the route they chanted funk songs including “Rap da Felicidade” and “Era Só Mais um Silva” (Just Another Silva, a song about police brutality). They prayed with the congregation of an evangelical church for an end to the violence.

The participants were greeted with support from other Alemão residents along the route who joined in with protest songs and prayers for victims of violence. This video shows one concerned resident expressing her opinion on the UPP’s occupation of the community.

The organizers of the event are using the #SOSComplexoDoAlemão hashtag to promote movements for justice in the community.

According to the hashtag tracking website Keyhole, the hashtag has a reach of half a million people around the world. Tweets originated mainly from Brazil, but people from the United States, Portugal, Sweden and Australia also joined in to ask for peace.

View the full photo album below or with captions clicking here: