For the original in Portuguese by Jorge Antonio Barros published in O Globo, click here.

Misconduct, all too common among the troops, cannot be swept under the rug in the favelas, where residents are tired of being oppressed between the cross and the rifles

Three years after Governor Sérgio Cabral’s re-election in the first round was attributed to the victory of the community policing program in the principal favelas of Rio, the UPPs (Police Pacification Units) lose ground just as the elections approach. The State Security Secretariat itself submitted a report to the Elections Tribunal noting that 41 areas of the State of Rio de Janeiro that are dominated by drug traffickers or militias to the point that access to democracy is impeded. Only candidates with a connection to crime or agreements with criminals have access to these areas. The number 41 is symbolic. It is greater than the number of UPPs, currently at 39. 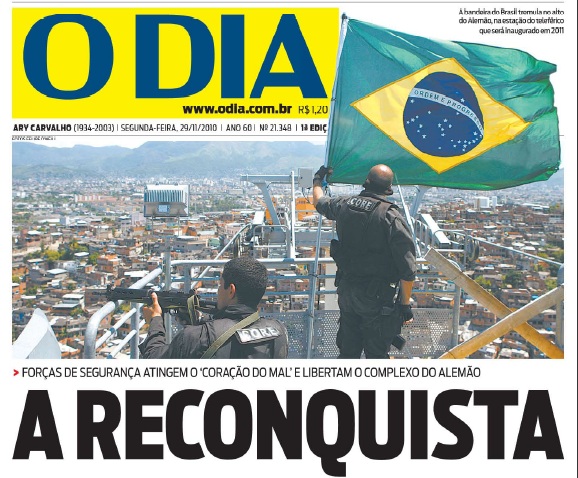 The most emblematic case is perhaps that of the Complexo do Alemão and Complexo da Penha, where eight of the 39 UPPs are located. The police operation that took Alemão from drug traffickers, with decisive help from the Marines’ armored tanks, will be four years old on November 25. It was the result of one of the largest police sieges ever realized in Rio. On the occasion, criminals were even given an ultimatum to surrender, but gang leaders escaped without a trace. One of them is known as Pezão (Bigfoot), curiously the same nickname as the governor, who is prohibited from campaigning in the area. The same area where, after the war operation of 2010, Brazilian and Rio state flags were hoisted.

The prohibition of Pezão and other governing candidates from campaigning in Complexo do Alemão could even work in these candidates’ favor. After all, these are candidates who were rejected by the traffickers because they represent a threat to crime. Yet, no. The imposition of the traffickers signifies that, in the last (or first) case scenario, criminals did not lose control of that territory, as the government proclaimed and as many residents ended up believing.

The army’s occupation and efforts to ‘clean’ the territory to be taken over by State troops amounted to nothing. Even without brandishing rifles and armed only with pistols, the drug traffickers returned to power after daring attacks, including the killing of several officers of the UPPs. Something went awry there, as well as in Rocinha and the Complexo da Maré. Of the 41 areas out of state control [i.e. safe for democratic voting], 10 have UPPs.

While the UPPs were not entirely new (the precursors of community policing in the favelas were the Ostensive Policing Detachments or DPOs, and the Community Policing Posts or PPCs of the 1960s and 70s), the fact is there was a drastic reduction in homicides with the retaking of certain areas. In some places, the traffickers withdrew organized one strategic withdrawal, hiding rifles, munitions and drugs.

The UPPs were a smart response on the part of the government. But they may have an expiration date if not accompanied by social investments. In the case of the Complexo do Alemão, the City announced that [the community] had received nine schools and remodeled another, built a Nave do Conhecimento (Knowledge Ship community learning center), implanted three Family Clinics and an UPA (urgent care clinic), remodeled a healthcare center and implemented the housing program Morar Carioca, benefiting 44,600 residents. Are the people perhaps ungrateful?

For the UPP to become consolidated the ongoing monitoring of police training and performance are also crucial. The project needs to be evaluated and the diagnostics need to feed back into the planning. Misconduct, all too common among the troops, cannot be swept under the rug in the favelas, where residents are tired of being oppressed between the cross and the rifles, whether those of drug traffickers or the police. The torture and disappearance of bricklayer Amarildo, by the UPP in Rocinha in June, 2013–just two years after the establishment of that UPP–opened up the floodgates of criticism of the program.

So what after all has gone wrong with some of the UPPs? This is the question the state government should have asked well in advance of the sacred hour of vote-casting. If it had sincerely sought answers, it may have realized that the UPP was a good solution, but imposed from the top down, greased by the aseptic packaging of marketers, without taking into account a critical aspect in a democracy: permanent dialogue with citizens. This channel would certainly open doors and build a culture of peace that would definitively overthrow the culture of drug trafficking.