Activists, students and community members gathered last Sunday November 2 at Rua Alcindo Guanabara in Cinelândia, Central Rio, to celebrate the 7th anniversary of the Manoel Congo occupation. Organized and led by the National Movement of Housing Vindication (Movimento Nacional de Luta Pela Moradia, or MNLM), this occupation has resulted in one of the most successful cases of re-appropriation of a public building for housing purposes in the city of Rio de Janeiro.

Occupied in 2007 after being abandoned for more than 15 years, the Manoel Congo building–previously a property of the National Institute of Social Security (INSS)–now houses 42 families, or around 127 people.  After six difficult years lobbying for government recognition, facing potential eviction and patchy utility services, the residents of Manoel Congo scored a rare victory when the state and federal governments pledged $1.1 million (R$2.9 million) to renovate the building and improve living conditions. The street party on Sunday was not only a celebration of the occupation’s tenacity but also its success in gaining access to these resources.

While there are laws in Brazil stating that public buildings abandoned for a number of years must be prioritized for social housing, in practice attempts by citizens to seize unused properties have often ended in quick evictions. Manoel Congo provides a beacon of hope for urban occupations, not least because of its location in Rio’s central district.

Sunday’s sunny afternoon, residents mingled with movement activists, supporters, local business owners and workers who stopped by the Manoel Congo building to chat, drink and eat free churrasco (barbecue). Among them was Gerson Almeida, representative of the MNLM in the state of Rio, who discussed the upcoming improvements for the occupation.

According to Almeida, the first order of business is improving the living quarters of the 42 families occupying the building. For the first six years of the occupation, each of the ten floors had only a single bathroom, sink and laundry room that were shared by several families.

“With the renovations, we seek to guarantee the families in Manoel Congo a more dignified place to live,” said Almeida as he walked through the building’s narrow entrance corridor. After the works are finalized, each family will have a unit of their own with bathroom, laundry room and a kitchen.

One of the priorities in Manoel Congo going forward is income generation for its residents. Resources invested by the federal and state government will also be used to transform the first two floors of the building into a restaurant/samba house, a cybercafé, a beauty salon business for residents, and office space for MNLM workers. Part of the resources will go towards improving the building’s educational space, called “Criarte,” where children of residents receive after-school tutoring as well as cultural education by members of MNLM and volunteer teachers from the Federal University of Rio de Janeiro and the Fluminense Federal University.

The Manoel Congo workers who will staff these new spaces have organized as the Urban League Cooperative, which is tied to the MNLM and strives to develop “work and production relationships based in solidarity and collective benefit from the assets and gains” of the building’s income-generating businesses.

“We’re bringing movement and culture back to the downtown area,” said Almeida during a tour of the building. “The restaurant will not only employ residents and provide a source of income but also revitalize the neighborhood.” The MNLM activist stated his hopes that others will follow the Manoel Congo Occupation’s example and foster more movements in Rio’s city center–which has security problems due to very little pedestrian traffic during non-working hours. 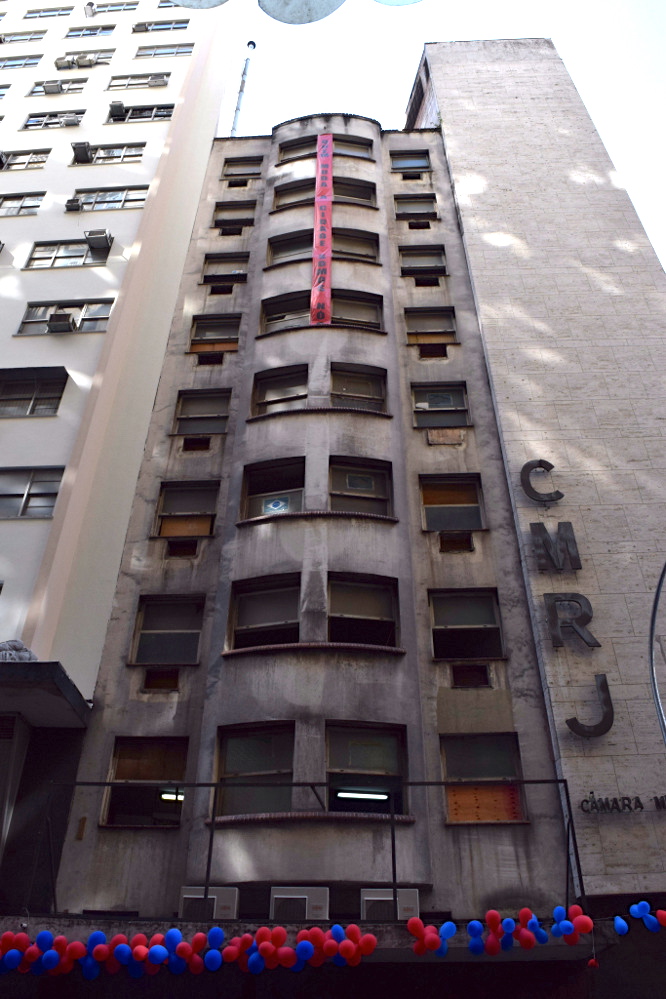 Lurdinha Lopes, who leads the MNLM at the national level, was also present at the celebration. In an earlier interview with the Brasil de Fato newspaper, she explained that families now living in Manoel Congo came from favela communities on Rio’s periphery and that most of the working residents scarcely earn more than minimum wage.

Since residents come from historically marginalized communities, Manoel Congo has inserted itself into the greater struggles for the rights of poorer and oppressed citizens in Rio. Like the MNLM itself, the community is “intrinsically tied to workers’ movements and racial justice movements,” says Almeida. Even the name pays homage to an important black leader in Brazil’s history. Manoel Congo was a rebel who led one of the largest slave uprisings in the country’s history, within territory that now makes up part of the state of Rio de Janeiro. Two other occupations organized by the MNLM in Rio–Mariana Crioula and Solano Trinidade–also chose the names of important Afro-Brazilians, tying their historic struggles with today’s, faced primarily by Afro-Brazilians who comprise the majority in these movements. The samba house that will soon take up the first floor of Manoel Congo will be named Mariana Crioula Samba House in honor of this important woman who rebelled alongside her partner Manoel Congo.

The success of the Manoel Congo occupation provides a refreshing counterpoint to the proliferation of middle-class housing and businesses in previously working-class favelas. On their website, MNLM pledges to fight against “white removal”–a local synonym for gentrification–which is systematically altering Rio de Janeiro’s urban landscape. Many foreigners and wealthier Brazilians are taking an interest in formerly off-limits favelas after the implementation of Pacifying Police Units (UPPs). Favela residents in places like Vidigal, Santa Marta and Rocinha see the value of the land they live on rise due to speculation and greater outside demand. The rising cost of living often forces residents, particularly those who don’t own their homes, to seek new spaces to occupy much like the families of Manoel Congo.

Continuing their work against inequality, injustice and the criminalization of low-income Brazilians, the MNLM will host a “sarau divergente”–or “divergent party”–on the grounds of the Solano Trinidade occupation in Duque de Caxias in the Baixada Fluminense on November 30, tying the resistance event with celebration of Brazil’s Black Awareness month. For more information about this event, click here.

Watch a 2012 video by RioOnWatch about the occupation: