To act like something still under scrutiny is decided is a well-known strategy to resolve an issue without having to systematize it.  This is what (Rio’s largest daily) O Globo tried to do with its cover story this past Tuesday, October 4th, regarding the possible removal of Vila Autódromo, a community located adjacent to the future Olympic Park, in Rio’s West Zone. After stating with no justification that the community’s residents were assaulting fans waiting in line at Rock in Rio (music festival), the newspaper now emphasizes on the frontpage headline: “After the Rock (festival), Rio will rid itself of its favelas for the Olympics,” then, on page 12: “Vila Autódromo on the final stretch.”

Journalist Luiz Ernesto Magalhães’ certainty was based on the details of a Public-Private-Partnership (PPP) request for proposals (RFP). Launched by the City for public consultation, the fifth clause focuses on the location of the Olympic Park and determines the “disoccupation of the totality of the area currently occupied by the Vila Autódromo community.” Despite this, the article itself admits that this issue is near and dear to the social movements (involved), who see the site as a symbol of resistance against evictions across the city. 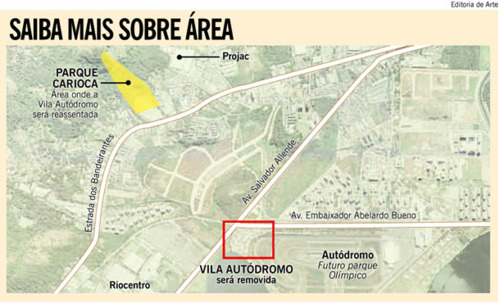 The request for proposals of the PPP predicts that 75% of the 1.2 million square metres of the area will be handed over to private enterprises after the Olympic Games, for the construction of residential and commercial condominiums and hotels. This amounts to a handing over of public land with the justification that the consortium of enterprises would bare responsibility for a portion of the costs of construction of the Olympic Park, estimated at R$1.3 billion. It is worth bearing in mind that only the Transcarioca project (one of the three new express motorways that is being built) costs more than this.

The fact is that the City of Rio does not require private enterprise to make these works viable. Opting for leaving as its legacy an elite neighborhood, which in and of itself is already a questionable choice, it would nonetheless be more logical to invest the City’s own resources in the region and sell highly valued lots to the construction companies post-2016. However, Mayor Eduardo Paes prefers to guarantee access to this land via contracts and at low cost already in 2011, which will guarantee him the financial support of real estate speculators to his reelection campaign next year. Rio will be left with a new elite neighborhood, made possible via (sale of) public lands, on the margins of Jacarepaguá Lagoon. 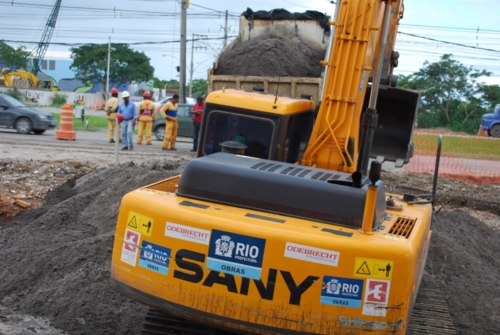 The City’s intention to leave the area free for real estate expansion is nothing new. Vila Autódromo, an old fishing colony that, over time, transformed itself into housing for many of the workers who built Barra da Tijuca, suffered firsthand the impact of the city’s westward growth and the subsequent pollution of the environment from which community members took their sustenance. It is predictable that a government that seeks to homogenize urban space, without considering location populations, is now keen on removal of residents.  For Mayor Paes, it is inacceptable that an area occupied by low-income residents would increase in value, even if they hold title, as is the case in Vila Autódromo.

Altair Antunes Guimarães is 55 years old and is President of the Vila Autódromo Neighborhood Association. He used to live on Caiçaras Island, on Rodrigo de Freitas Lagoon (now Rio’s most expensive neighborhood), when this same removal process happened in the city’s South Zone during the 60s and 70s. Evicted from his home, at 14 he and his family were taken to City of God (a community infamous for violence through 2009). From there he was removed yet again when the Yellow Line motorway was built during Mayor Luiz Paulo Conde’s administration (1997-2000), at which point he chose to move to Vila Autódromo. Now, he’s being confronted with his third eviction in four decades: “The sense is that you are always in people’s way, having to (cede and) make space for people.” 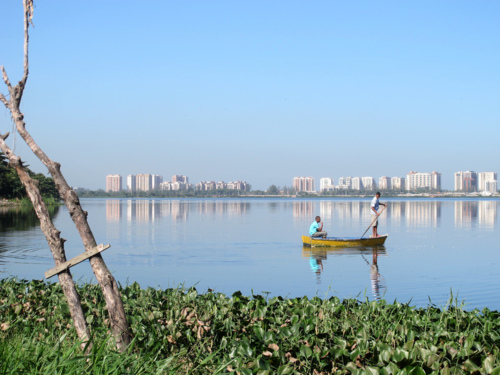 The City of Rio and O Globo know that the eviction of Vila Autódromo is not going to be easy, as the front page headline and internal images, the most widely viewed portions of the paper, imply. Resistance in Canal do Anil community in 2007, a neighborhood next to the Pan-American Games Village, and which was also targeted by the City’s demolition crews, is still fresh in everyone’s memories. If Vila Autódromo today is considered a favela it is because the City government never assumed their responsibility to urbanize it. This battle is just beginning, it is not the first nor will it be the last. Altair will have plenty of support to, after two defeats, finally celebrate his first victory. Only the future can tell.