Complexo do Alemão‘s yearly carnival street party was aggressively brought to an end by policemen who “created chaos in the crowd, fired guns, tear gas and pepper spray,” according to residents who took to social media to complain about the incident.

On the evening of Tuesday February 17, residents of Alemão gathered in Largo do Itararé to drink, eat and enjoy samba music in celebration of carnival. Street vendors sold beer and food to their customers and the music was playing loudly.

Policemen arrived in the early hours of Wednesday February 18, ordering the music to be turned off and conducting body searches in the crowd. 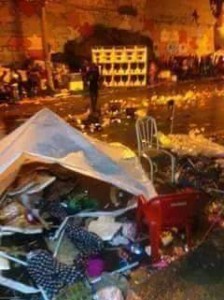 “Five policemen go into a crowd of five thousand or even more, and start searching people,” community leader Raull Santiago posted on Facebook. “The level of stress was rising… moments after, it was chaos. The same five policemen start shooting without aiming to get out of the crowd.”

Residents also report that policemen threw tear gas, stun bombs and pepper spray to disperse a crowd that had been peacefully celebrating a yearly holiday.

“In the beginning I was paralized because so many people were passing out, and then I saw how many children, especially young ones, were being helped by people and I joined my friends to help,” Santiago said. “Later, when I was waiting for [a friend] by the emergency room, loads of people walked out with bandages, scared, crying.”

Resident Mariluce told RioOnWatch: “I think the policemen got scared with so many people around them and started shooting and everyone started running. There were children, elderly, people in wheelchairs…”

The group Coletivo Papo Reto, recently honored by the State’s Human Rights Commission, expressed its members’ anger at the situation on its Facebook page. The group said: “The event had received permission to take place and was interrupted with bullets, stun bombs and pepper spray… We got information that people were beaten for the simple fact of questioning such an aggressive approach. Children got lost from their parents and there was a lot of running… A sad and revolting end to the night.”

No Samba in Quadra Nova Brasília

The samba group Unidos do Complexo do Alemão was also subjected to police repression this carnival when organizing its yearly samba events. The group has used the sports court, Quadra Nova Brasília, to rehearse for years during carnival, but last week organizers were informed they would be unable to have their usual parties in that space. Traditionally during carnival the group does a street procession that ends in the court where the party continues.

But a document signed by Pacifying Police Unit (UPP) commander Leonardo Gomes Zuma forbid the events from taking place in Quadra Nova Brasília on February 8, 13 and 16, claiming that “due to the current scenario in the community wherein residents and policemen have been hurt and killed, it is not recommendable to authorize an event where alcohol abuse is known to happen.”

According to residents, the forbidden events are family-friendly and there has never been a reason to shut them down. In an act of resistance, the samba group’s procession took place on February 16, with the police barring people from entering the court.

Coletivo Papo Reto posted on their page: “The samba cannot stop, even if the police wants to end the fun. Samba has been repressed during its history, but it is still alive. In Complexo, samba resists and the people have fun!”

Community leaders are now planning to get year-round permission from the City to use the court so the police can no longer interfere in the events during carnival.