For the original in Portuguese by Lucilene Santy, published in Voz das Comunidades, click here.

Many residents of Alemão still do not have access to the free Wi-Fi network, which today is fundamental for security.

The project that offers free Internet access through a wireless network in Complexo do Alemão is now celebrating its third year. This is a particularly good moment to evaluate its results. The Voz das Comunidades team went to the streets to see how far the wireless network reaches and how residents feel about what should be broad digital inclusion.

Nowadays people live a connected life, both for work and leisure purposes. Who doesn’t want free Wi-Fi in this era of smartphones and social media? The democratization of knowledge that accompanies digital inclusion is transformative for society. Those who have access to the Internet are not only better informed and up-to-date, but they also gain the power to transform society for the better.

In Alemão, the free Wi-Fi service was installed in 2012 with the objective of reaching approximately 380,000 people. However, reality has fallen short of expectations. Actually using the wireless network has proven difficult. Josiane Santana, a 27-year-old photographer, needs the Internet for work. She lives in an apartment complex in Estrada do Itararé and says she has never been able to access the network provided by the program Rio State Digital: “It is a service available for residents that has never functioned correctly. It’s ridiculous,” she vented. 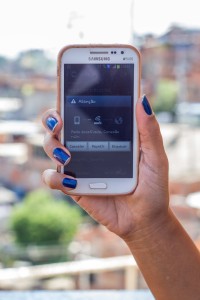 Diane Oliveira, a 32-year-old university student, has never been able to access the Internet in Alvorada, close to the cable car station in Alemão. According to Diana, residents were able to use the service right when it had been implemented, but after a few months it became impossible to connect to the network. “It was great! The square would get crowded with children and teens connected to the Internet. Now you need to ask your neighbor’s password to get on the Internet,” she explains.

What many residents seem to agree on is that free wireless Internet is a necessity, not a luxury. Social media networks facilitate communication between residents, who can then exchange information on such issues as the cable car or changes in its schedule. As a community newspaper, at Voz das Comunidades we receive new pieces of news and information throughout each day, which we then spread through social media networks in order to help and inform residents.

Diane also points out there is no fixed transportation schedule in Alemão, so one of the ways to get in and out of the community is by sending messages to friends and neighbors to ask about the current situation.

Despite many complaints, there are spots where the free Wi-Fi of Rio State Digital still works. At the beginning of Pedro Avelino Street, behind the emergency health center of Alemão, Adryelle Silva de Oliveira, an 18-year-old student, informs us that she has always been able to use the service. Even when there is no Internet signal at home, she has always been able to connect to the free Wi-Fi network at the nearby square. “The network is always available, so people who don’t have Internet come here.”

The Technical School Support Foundation (FAETEC), the organization that controls the program, informed us that some of the equipment is switched off or broken, mainly because of vandalism.

Another difficulty arises because the technical team is sometimes prevented from doing its work. A meeting has been scheduled with some of the active organizations in Alemão to solve this problem. Technicians from FAETEC and from the company that manage the network will also be present at this meeting.