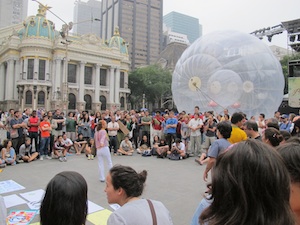 As it began, Occupy Rio looked set to follow an all-too-predictable pattern amongst leftist movements: the descent into partisan bickering. A small group had gathered at Cinelândia on a gray and rainy afternoon in Rio, answering Spain’s Indignados’ call for worldwide protests on October 15, but it was not long before the arguments started. At issue were the political party banners carried by some of the protesters and fears that any sort of connection to a political party went against the true anti-system philosophy of the original occupy movements. Intense arguments soon divided the group in two, and the few carrying party flags soon packed up and went home, deciding to ply their wares elsewhere. But for the rest of the afternoon and on into early evening, the group displayed a commendable unity of purpose.

The demonstrators formed a circle at the steps of the City Council building and slowly began covering the ground at its center with signs bearing a variety of messages, from “Get off the couch and come here,” to “Go by bike!” or “The media lies!,” or simply “Love.”

The political party question was discussed, one demonstrator mentioning that “political flags represent a step backwards.” The issue was then peacefully resolved, however. “I too have a party,” said one of the first to enter the circle to speak, “but that’s not what this is about. Today I’m here representing only myself.” 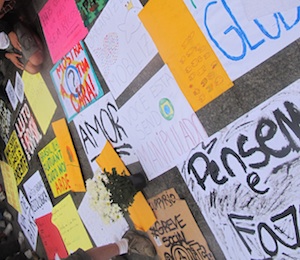 Lacking a megaphone, protesters took a page from Occupy Wall Street’s book, with those nearer to the center repeating the speakers’ sentences so that those on the edges of the circle could understand. The floor was open, and anyone willing to step over and around the numerous placards had the right to address the crowd. Speakers touched on a variety of topics. The mega-events soon to arrive in Rio were much discussed, with various speakers denouncing the illegal evictions and favela-razings that have come to characterize the preparations for the World Cup and Olympic Games. Others warned that these events will only make Rio a more attractive target for the fickle comings and goings of international capital. One speaker spoke against planned housing developments in Brasília that will infringe on traditional indigenous lands, and another spoke against government shutdowns of community radio stations, like the one in Santa Marta in May of this year.

Despite a dismissive Globo report that put the number of demonstrators at 37, the gathering was closer to five times as large at its height. Several speakers told their personal stories of struggle, emphasizing the simple solidarity of a group of “human beings, not organizations.” In the end, the demonstrators embraced what had become a central theme of the day: the diversity of viewpoints, opinions, and personal backgrounds of those gathered. 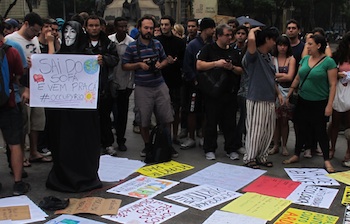 One speaker summed it up: “People will wonder, will all of this here work? But it is already working. This is the solution. This is where it’s at!” implying that it is simply creating an open space for dialogue and exchange that is the purpose of the event.

As light began to fade and the rain began to fall in earnest, the protesters relocated to the shelter of a nearby building and split into working groups with the goal of beginning the occupation of Cinelândia next Saturday, October 22. Working groups for food, security, legal issues, infrastructure, and promotion were formed, and strategy discussed. Finally, with plans made and high hopes for the beginning of the true encampment, the protesters allowed themselves a collective round of applause and a bit of dancing, with beats, appropriately, pounded out on repurposed Cargill fertilizer cans.