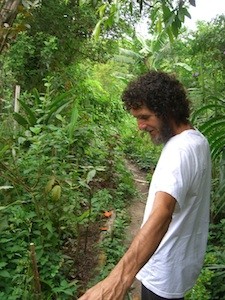 Luiz Carlos Matos Marins, better known as Luiz Poeta (“Luiz the Poet”), founder of the project Verdejar, works in the neighborhood of Engenho da Rainha in the North Zone of Rio de Janeiro. Today, on this Blog Action Day 2011, the theme of which is FOOD, we chose to interview and publish this story in recognition of the work of the incomparable Luiz Poeta.

The history of his project, Verdejar, is replete with struggles, partnerships, events and hard work – all with the goal of reclaiming Serra da Misericórdia (the largest section of the Atlantic Rainforest in the North Zone of Rio), employing principles of agroecology. His many successes include having the city government order that the Serra be decreed an Environmental Protection and Urban Renewal Area (known by its Portuguese acronym “APARU”). The project is also responsible for preserving green space in the community of Sérgio Silva, an extension of the Alemão Complex, which sits upon the Serra da Misericórdia. The “Serra” (or mountainside) is almost completely destroyed as a result of granite mining and unchecked urban growth. 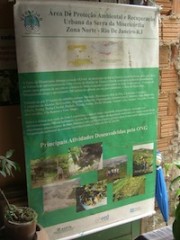 Luiz employs his humility and determination to ensure that green areas remain on the Serra. His main tools are raising awareness and organizing the community, ecologists and the many young people who volunteer to participate in organized clean-up projects sponsored by Verdejar. These planned group activities help keep the forests safe from fire, by building water fences, and courageously blocking land takeovers by loggers, drug dealers and real estate developers.

One thing that makes Verdejar stand out is its practice of agroecology, which seeks to preserve the balance between the environment and the production of healthy and socially just foods, which is a model that is in the nascent stages of a new way of living with nature, where life as a whole is protected. His understanding of ecology is a profound conception, which passes through the transformation of our human internalities, our feelings and motivations, as well as through our food. 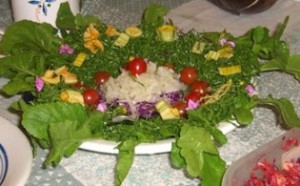 Organic and raw (living) foods play a fundamental role in Luiz Poeta’s life, who was diagnosed with metastatic breast cancer that spread to the bone in 2008. According to him, it was thanks to traditional treatments combined with consumption of foods grown in an agroecological manner that he has been able to maintain his health and work over the past four years towards the preservation of Serra da Misericórdia, promoting awareness of agroecology and urban agriculture.

Luiz Poeta, born in 1955 in Marechal Hermes, recalls that his childhood was rather austere; his parents were evangelical Christians, for whom “even flying a kite was a sin.” His schooling was no less difficult, and violence was not uncommon if the boy made a mistake. He started school at age 9 and after finishing primary school at age 15, stopped attending school altogether and went to work as a carpenter alongside his father. Poeta only finished secondary school after he turned 50. 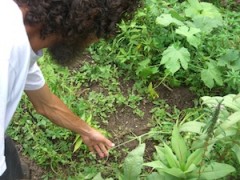 A repressive household coupled with the political repression of the Brazilian military dictatorship of his youth, caused young Luiz to nurse feelings of indignation and rebellion, which led him to consider joining the armed struggle to overthrow the oppressive regime that Brazil lived under at that time. Luiz has the soul of a Poet though, and he couldn’t bring himself to do it. Maybe because he knew it would end up generating sentiments worse than those he wished to combat in the first place.

He taught himself by attending plays, watching movies, reading many books. He was influenced tremendously by hippie culture, which led him to the counter culture groups of the 70s and 80s. These brought to Poeta pacifist influences and an anarchist concept of power. It was based upon these philosophies that Verdejar was founded and became a bottom-up, non-hierarchical organization, open to everyone.

It was only 6 years ago that Luiz Poeta left his work as a carpenter to dedicate his life to Verdejar. For years he received just R$200 in donations from Verdejar members. 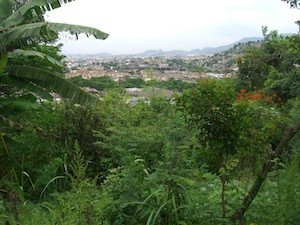 Poeta reflects on Verdejar’s trajectory and sees his dreams and dedication moving forward. Project members fought long and hard, and succeeded in getting the federal government’s Growth Acceleration Program (PAC) enacted at the Alemão Complex to grant Verdejar a house that will be its new head office to implement Environmental and Food Education projects.

The Verdejar Food Education project seeks to raise awareness among young people, providing education of how food production and consumption should take place within a fair trade production structure, one that does not exploit the land or workers; in addition to the conscious use of land, which is the foundation of agroecology, where food is produced without harming the land. The practical components of Verdejar’s programs are conducted in the Chico Mendes Garden in the community Sérgio Silva, where Environmental Education is practiced with both students and locals. The program also includes a workshop on the production of plants native to the Atlantic Rainforest, in addition to fruit trees, ornamental and medicinal plants.

The Environmental and Food Education programs are part of the framework of Luiz Poeta’s belief in “Deep Ecology,” which seeks to ensure both environmental conservation and food preparation in alignment with labor relationships that are based in solidarity and the awareness of the greater social good.

When he was asked about the Pacifying Police Unit (UPP) in the Alemão Complex, Poeta said that it will be a few years before he can form an opinion about it, but he likes the idea of community policing as it is being implemented there, where the police live in the very community they are charged with protecting. 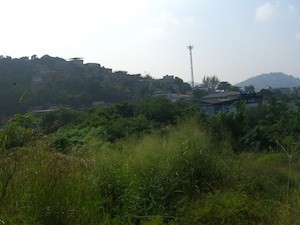 As an organizer for environmental and pacifist causes, Luiz Poeta affirms that dealing with the government is not an easy task, requiring a great deal of patience. In his opinion, many of his fellow activists end up growing weak and ill because they have spent so much of their energy fighting for the rights of their community, often challenging the interests of power and profit.

But thanks to faith, and loyalty to an adolescent dream, Poeta, in his gentle way, maintains and expands his legacy of love, which is literally visible to the eye on the mountainside of Serra da Misericórdia which has already returned to its natural green state.

A poem by Luiz Poeta: