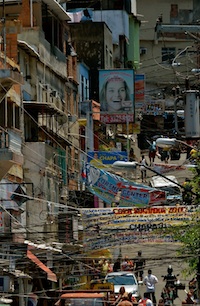 November 11, 2011–Things are changing in Rocinha. The South Zone community is now effectively transitioning from being run by the notorious drug faction Amigos Dos Amigos (ADA) to a Pacifying Police Unit (UPP) force as early as this weekend. With international attention on Rio de Janeiro as it prepares for the 2014 World Cup and the 2016 Olympics, residents have long known the pacification of the favela was a priority for the city due to its physical importance (Rocinha is the largest favela in the Americas) and prime location nestled between São Conrado, Gávea and Leblon, some of the most exclusive neighborhoods in the city. But, until now, nobody knew when.

As a current resident of Rocinha, the change has been apparent. The frequency of police activity around and in the favela has notably increased. Living in a favela means becoming part of a very close-knit community, so when something changes in one part of the community it can be felt by everyone in the neighborhood. It is palpable. 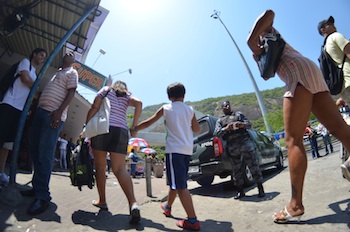 The pace of change in Rocinha escalated rapidly on November 3rd when the special forces (BOPE) and Civil Police entered the favela. Where young lookouts for the drug traffic normally keep watch sat a caveirão (police armored truck) accompanied by three police cars. Further down the hill, more police cars and many more police. Lifelong Rocinha residents reported that police were seen in areas of the favela that they had never been seen before questioning residents and taking photographs. It was reported that during the operation 90 anti-aircraft missiles were seized. Rumblings began in the favela late last week that there was going to be UPP installment soon.  Later a date was assigned: Sunday, November 13th.

Last Sunday, November 6th, Antônio Francisco Bonfim Lopes, known as “Nem,” Rio’s most intelligent and sophisticated drug trafficker who runs the show in Rocinha and Vidigal favelas, was reportedly rushed to the hospital in Rocinha for seizure resulting from ingesting a combination of alcohol and MDMA at a funk party on Rua 4. This was very uncharacteristic from a man who reportedly doesn’t use drugs and is known to be very controlled. It was becoming ever clearer to residents that everyone here was under pressure. 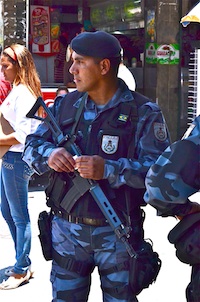 The tension level inside the community is now rising as the police presence surrounding the favela persists. This continued pressure appears to be part of the police plan in destabilizing the drug faction’s hold over the favela. Rocinha residents are preparing, but we are not quite sure for what. In a place where at times it takes 3 minutes to find an opening in traffic to cross the street, traffic has decreased by approximately 80%. Many of the stores are closed and the ones that are open close early. There are significantly fewer people walking around in the larger public areas of the community. People are sticking closer to home. You can see preoccupation in the faces of almost everyone you pass in the street. A place that can be so noisy that you need earplugs to sleep, has become as quiet as a suburb. It is an uncomfortable silence. In my experience the only thing comparable was being in New York City on and in the weeks following September 11, 2001.

However, many residents are excited to welcome the UPP into the favela. In passing neighbors on the street, normally when one asks “tudo bom?” (all good?) the normal response is “tudo bem” (all’s good). But over the past few days it has become “muito” (very). One longtime Rocinha resident, as he elaborated on the events of the last few weeks, stated “Now we are finally free to speak.” Other denizens have commented how the installation of a UPP force will not only lead to improved services, but to an improved public perception of them. As the favela stabilizes residents hope to see what has been a recent boom in investment and development continue. Sources at the PAC program report that work that had been halted due to lack of finances is set to resume, as well as the construction of a gondola similar to the one in Complexo do Alemão. 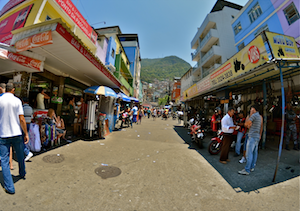 At the same time, many people in the community talk about how benevolent Nem was as an individual. In a country known for police corruption, when people in Rocinha watched the footage yesterday of Nem being manhandled on the television news following his arrest out of the trunk of a diplomatic vehicle, some wondered if the “evil” they knew might be better than the “evil” they don’t know. The arrest of several corrupt officers on Tuesday night is at the very least, a step in the right direction in bolstering public confidence in a municipal police force. But much remains to be done. Today’s O Globo newspaper reports that half of Nem’s budget was dedicated to police payoffs.

To the outside world, people involved in the traffic are often simply thought of as criminals who have made the choice to enter the drug trade. To many people inside the favela the bandidos (traffickers) are their husbands, sons, brothers, friends and neighbors who entered the trade due to lack of viable alternatives for supporting themselves and their families. Early one morning last week, I was walking towards a young man in an alley, wearing a messenger bag and eating a pastry, who I presumed was on his way to work or school. It was only when he passed me that I realized what I thought was a messenger bag was the strap from his semi-automatic machine gun. What will become of him in the coming days? I hope UPP intends to be as aggressive in its social efforts to provide support and opportunity for favela residents as it is proving to be in its operation to pacify the favela. 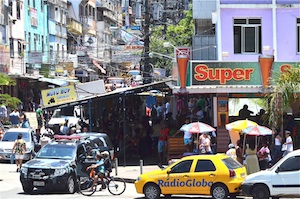 Right now, Rocinha is on lockdown. Police are stringent in checking both people and vehicles leaving the favela. For the last five days helicopters have been heard overhead circling around at all hours, day and night, keeping an eye on all activity inside Rocinha, as well as any unusual exits from the favela. At night they fly without lights, undoubtedly due to any anti-craft missiles that may remain here. Today however, top drug sellers still dine in the open…and Rocinha is bracing itself for what will come next.