On Saturday September 12, residents of Vila Autódromo met at the community’s Catholic Church where they were presented with an aerial map of their community. The map was composed of 20 photographs selected from 1,238 taken 200 to 300 meters high between 9am-11am on August 15, 2015. The project was part of the Federal University of Rio de Janeiro’s MediaLab project #dronehackademy, an initiative of Pablo da Soto, Douglas Monteiro and Marlus Araújo with the assistance of community members, and uses GoPro cameras on drones to document rapidly changing areas of the city. The objective of Saturday’s event was to explore the possible uses of the aerial map and how it could benefit Vila Autódromo during this intense moment of transformation, due to evictions in the community located adjacent to the future 2016 Olympic Park. 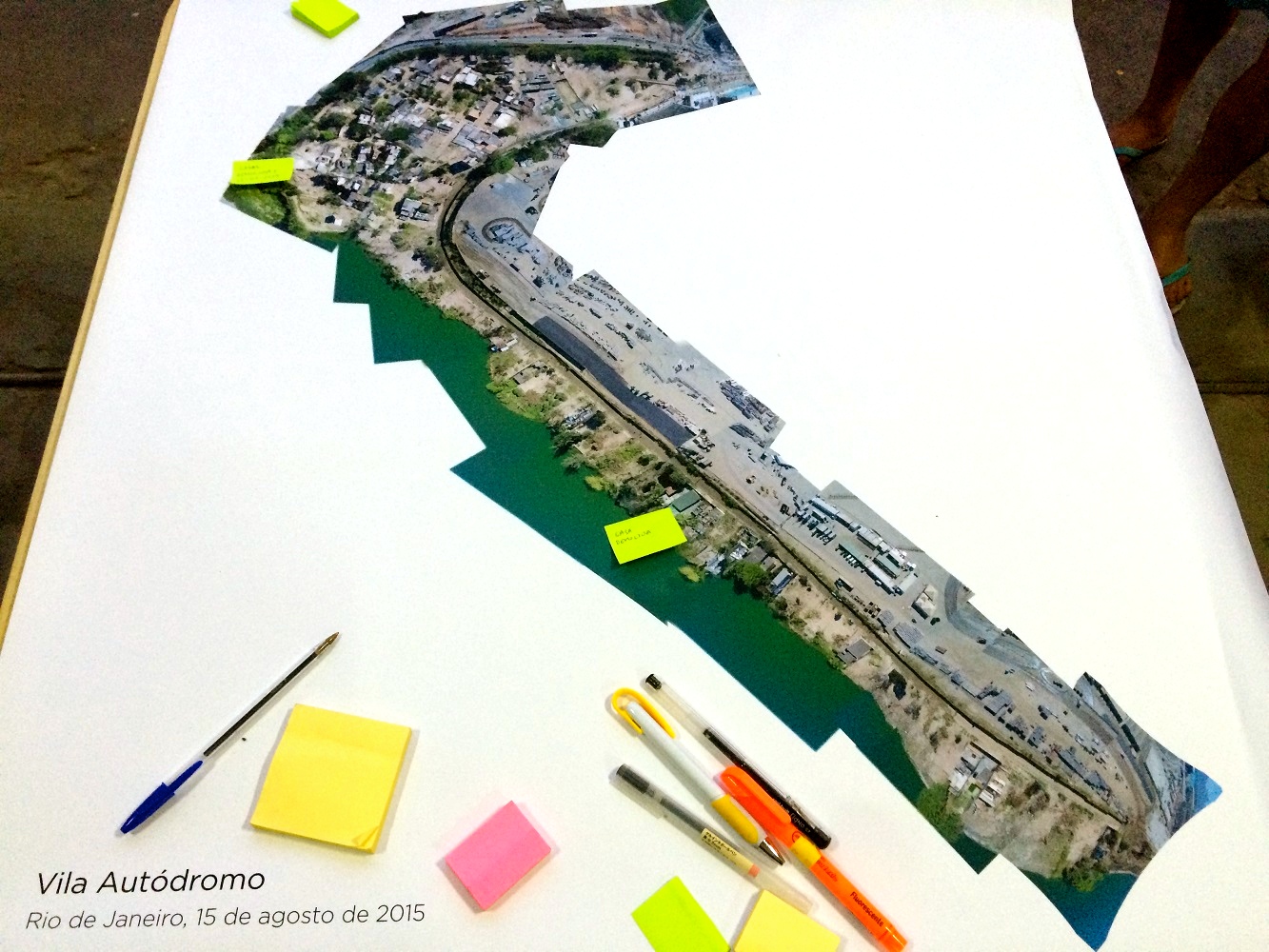 The meeting took place primarily with residents gathered around the aerial map. The aerial view invited a sense of globalism to Vila Autódromo while allowing residents to step in and give a local perspective, highlighting specific cases of what is happening around each area of the community.

All presentations were made by community members, who spoke freely back and forth, yet were united in their message. As has been characteristic of Vila Autódromo’s long held and enviable resistance, new leaders emerged, ranging in age from 20 to 80. Approximately 100 families still inhabit the community, some awaiting compensation offers they feel are just, while others await an upgrading plan promised to them by Mayor Eduardo Paes in 2013 and confirmed publicly by Paes as recently as last month.

Vila Autódromo has always been a safe, self-sufficient and affordable community, reasons why many people chose to live there, and why many planned to live out their lives there. Resident Dona Dalva spoke of her 25 years living in the community and that she has not only her grandchildren living there but great-grandchildren as well.

“It’s one big family,” Dona Dalva added. The feeling of family among remaining community members was palpable as they hugged each other while reflecting collectively over the map.

A number of demolitions are scheduled to take place this week in Vila Autódromo. One community member asserted his house will be the only one left on the block.

Since the aerial images were taken one month ago 20 houses have been demolished. The entrance of Vila Autódromo has been removed to make way for a hotel construction project. According to residents, there is a road project planned which will cut straight through their land. They plan to contest it.  The community members feel they are being “squashed” as each week brings a new wall, barrier or other limit to the community. Moreover, the loss of their entrance and welcoming signage has made it feel like the government “is removing the community’s identity,” Natália said. 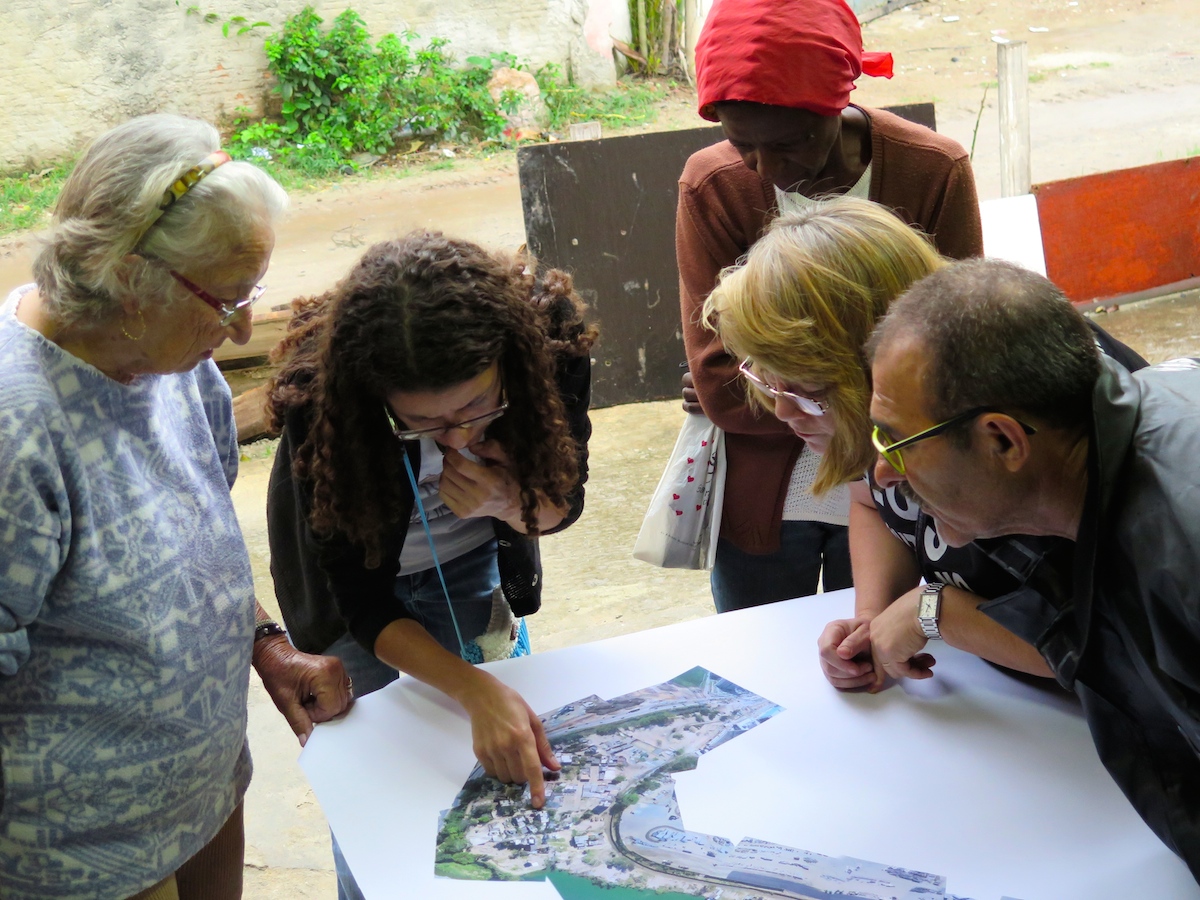 Psychological pressures escalate as the community is forced to live among cracked pipes and the remains of houses and belongings. These pressures affect residents’ resolve as many who once thought they would never move have accepted compensation or replacement apartments in the nearby Parque Carioca housing project. Ultimately this creates a sense of fear which is felt to be a key strategy of the municipal government.

Major Eduardo Paes has upheld to the community on multiple occasions that those wanting to stay can do so, and the core part of the community is not marked for eviction. At least 30 remaining families in Vila Autódromo are set on staying regardless of circumstances or compensation as they insist on making good on this promise. “If we residents don’t take a stand, who will?” Natália argued.

The aerial map sparked a dialogue amongst Vila Autódromo’s remaining residents, opening up a space for individuals to speak up and share their stories. Many reminisced about buildings, houses and daily events while others imagined the could-have-beens. The event concluded with the idea that the map could be used to create an “imagined” community as well as something children could participate in and overall be symbol of unity for the community.

Natália Pacena explains the current situation of the community’s negotiations with the city at the mapping event (in Portuguese):