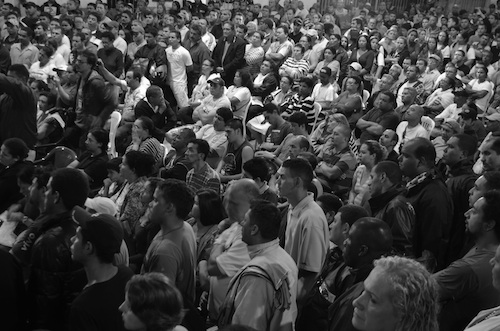 Rapid change is coming to Rocinha following police occupation of Brazil’s largest favela last Sunday. This Wednesday evening, November 16th, residents filled a makeshift auditorium at the community samba school Acadêmicos da Rocinha on Rua 1 to be addressed by the Special Operations Battalion (BOPE) Coronel René Alonso. Alonso was there to officially inform them of some of the ways in which the recent power shift would affect their daily lives.

Coronel Alonso began by informing the audience of some of the new rules by which they are expected to abide. Drugs and guns are illegal, which should be obvious but was stated for the record. The imposition of noise restrictions, which curtails any excessively loud noise or music played after 10pm. The coronel explained if your neighbors break that law, you have the right to call the police and have it stopped to which the audience cheered. For special events or parties where music would customarily be played past 10pm, one can obtain a permit with a beginning and end time. Much to the pleasure of funkeiros in the audience, he explained that baile funks (funk parties) will continue. But he also explained that prohibido (prohibited) music is now banned at them. Everyone must now wear helmets when riding motorcycles, including passengers.

The BOPE commander thanked residents for their cooperation during the police operation on November 13th where not a single shot was fired. He informed citizens that if they see anyone breaking the law, they should report it to the authorities. He then addressed something that has been a concern for many after witnessing previous operations including those since November 2010 in Complexo do Alemão: the abuse of power by the occupying police force. He told the audience that every officer has his name on his uniform and that if they witness any of them engaging in illegal or questionable activities, they should be reported. Coronel Alonso was followed by deputy governor Luiz Fernando Pezão who discussed the social interventions planned for Rocinha which include a vocational school that will be opening at the samba school site.

In a moment of perhaps slightly over the top propaganda, a slide show with accompanying rock music was played for the audience. The first half of the show only showed images of the hardship and horror of favela life, the second depicted favela life post UPP installation only through images of joy and happiness.  The audience watched this presentation with relatively little expression. Towards the end of the meeting animated booklets entitled “UPP: A Conquista da Paz” (UPP: Conquering Peace) were handed out to the audience. After the meeting community leaders mixed and mingled with residents, BOPE members and UPP representatives. 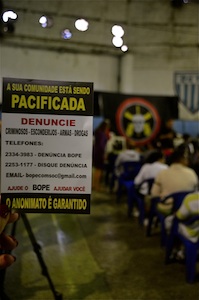 I have observed the reception of UPP in Rocinha to be overwhelming positive. However, everyone is not happy. It is estimated that there were approximately 800 people involved in gang activities in Rocinha prior to the occupation and another 20,000 people in the favela who were supported to some extent by the informal economy that was in place here (90% of commerce in the community is informal). This means unemployment in Rocinha has just skyrocketed. In a community of 100,000-150,000 people, where there are only two schools, many people entered the drug trade or informal employment sectors because they lack the official qualifications to procure forms of licit employment that would allow them a sustainable wage. It is of utmost importance that the social interventions planned for the favela are as aggressive as the military intervention that took place on November 13th, or there won’t be peace for long. In speaking with UPP representatives I was informed that a vocational school would be opening at the samba school site and that people will be able to attend training programs at various other sites around the city. I was also told of youth programs that are comprised of educational and academic components.