Women in Brazil are on the march. That’s true in a literal sense, as women put boots-on-the-ground today in Brasília for the annual national Black Women’s March, and in recent weeks in protests against a proposed law to restrict abortions in cases of rape. It’s also true in the sense that women’s issues, stories and opinions have seized a powerful spotlight in public conversation this month.

Although the issues under discussion are not new, the volume of the conversations and the dynamism of the activism are rising. This compilation of stories aims to show why it’s a difficult but exciting moment for women in Brazil.

Data from 2014 suggests 10% of Brazilians believe the question of violence against women receives more attention than it deserves. But a new study entitled “Violence Map 2015: Homicides against Women in Brazil” offers evidence to suggest violence against women is in desperate need of solutions. Urgently. Presented in Brasília on November 9, the study compiles national, state, and city-level data on female deaths in Brazil from 1980 to 2013. Following the Maria da Penha domestic violence law in 2006, the number of “femicides” fell from 4.2 deaths per 100,000 people to 3.9 in 2007, but then rose to 4.8 deaths in 2013. These numbers make Brazil the fifth most lethal country for women out of 83 nations studied by the World Health Organization. The results show that 50.3% of the 4,762 registered homicides against women in 2013 were committed by relatives, making domestic or family violence the most common form of lethal violence against Brazilian women.

Overall, the annual number of femicides grew 22% between 2003 and 2013, but this statistic hides racial discrepancies. In the same time period, homicides against white women fell by about 10%, but homicides against black women grew more than 54%. Young women are also more vulnerable than average. 18 year-olds had the highest incidence of homicides, while 18 to 30 year-olds accounted for 39% of all femicides.

The 2012 version of the same Violence Map project pointed to falling homicide rates for white youths and rising homicide rates for black youths from 2002 to 2010. Mothers of black youths killed have been growing in visibility, particularly those who have lost their children to police violence. This week, Terezinha de Jesus and Ana Paula Oliveira, mothers who lost their sons to police violence in Alemão and Manguinhos respectively, are traveling around Europe with Amnesty International to speak about their losses and Brazil’s security crisis. Terezinha’s story has received some recent international media attention since police concluded the officers who killed her son in April were acting in “legitimate self-defense.”

Violence against black women and their families will be a key issue in today’s nationwide Black Women’s March. Organizers are expecting thousands of protesters to take part in Brasília on behalf of the 54.9 million Brazilian women who identify as black or mixed-race. A call-to-action video explains women will march for equal salaries, for respect for the social role of black women, against racism, against violence, and for their well-being. In an article titled, “Why black women march,” Columnist Flávia Oliveira points out that in addition to high homicide rates, black women suffer more fatalities related to pregnancy complications and lower average salaries: 60% of white women’s average salary, 75% of black men’s, and 40% of white men’s.

The issues facing Brazil’s black women are intensified in the favelas. In an article titled, “The woman of the favela’s cry for help,” Complexo da Maré journalist Gizele Martins explains that the average woman in a favela lives “day to day,” because “it’s her house that has been removed in this marvelous city for more than 100 years, and her child who, for a century, has been assassinated due to the criminalization of poverty.” While their culture, identities, way of speaking and dressing, and even their role in childbearing are devalued—former governor Sergio Cabral once described favelas as “factories for producing criminals”—Gizele writes that women of the favela will continue “speaking, writing, shouting and demanding” their rights. For writer Juliana Borges, black feminism allows women to “love bravely,” to “subvert historical images and constructions,” and ultimately “destroy and transform the oppression” facing them.

When a 12-year-old female contestant on MasterChef Junior was the target of creepy tweets from men, journalist and feminist Juliana de Faria began tweeting about her experiences of harassment as a kid. The hashtag #MeuPrimeiroAssedio—“my first harassment”—went viral with over 90,000 tweets as tens of thousands of women shared their stories of harassment and assault as children. Some women shared experiences at ages as young as five, often in everyday spaces from the supermarket to the beach. 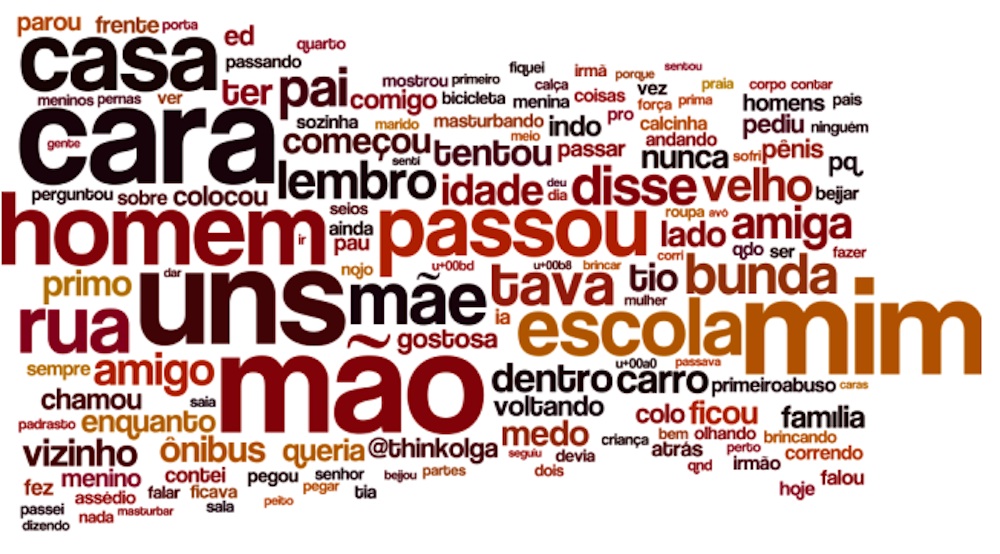 Another creative response to harassment came from 17-year-old student Catharia Doria. Doria created an app called Sai Pra Lá (Leave me Alone) which targets of harassment can use to record what they experienced (verbal comments, physical contact, whistling, etc.) and where it occurred. The app’s creator points out the lack of information on harassment until now: “Nobody ever really denounces harassment, it’s like it didn’t happen, so we can’t know how often it has occurred.” The result of her app’s data collection is a map of what harassment looks like, which should enable people to better combat the problem.

The app complements the Via Lilás project, which earlier this year installed interactive machines in 23 Rio train stations (including two Alemão cable car stations) to allow individuals to report sexual or domestic violence, assault, and harassment, among other gender-based crimes, facilitating data collection on incidents that otherwise often go unreported.

Also this month, women have taken to the streets in Rio, São Paulo and Brasília to protest a law proposed by Brazil’s Congressional president Eduardo Cunha, recently implicated in the federal corruption scandal, which would further restrict women’s rights to abortion. Currently, abortion is only legal in Brazil in cases when the mother’s life is at risk, the fetus has brain damage, or the pregnancy is a result of rape. Cunha’s bill, law 5069/13, would require a rape victim to prove she was raped in order to qualify for a legal abortion, through evidence of physical or psychological harm. Protesters argue providing evidence is not always possible and that methods of demanding evidence could be invasive. Many of the protesters would favor legalizing abortion as a woman’s choice, but if abortion must be restricted, they refuse to see additional limitations placed on women’s rights, demanding Cunha’s removal from office with the hashtag #ForaCunha (“get out, Cunha”). One 19-year-old student protester stated: “We’re here to prevent setbacks at [Cunha’s] hands.

Cunha is not the only politician facing backlash from women’s rights groups. Recent headlines that Rio mayoral candidate Pedro Paulo beat his ex-wife, Alexandra Mendes Marcondes, on two occasions in 2008 and 2010 led the former couple to hold a joint press conference. Marcondes admitted she had filed two police reports against her husband for physical violence, but still assured reporters he “is not an aggressive person.” She dismissed the media scrutiny by saying “all couples have fights.” Paulo added: “Who doesn’t lose control?…We were a couple like any other. Who doesn’t go through this?” These statements excuse domestic abuse by normalizing it, sending the twisted message that it’s okay because it’s commonplace. Although not as popular as #ForaCunha, #ForaPedroPaulo has also made its mark on social media and in protest signs and chants. Both these politicans were targets of slogans at Rio’s fifth annual SlutWalk on November 15, where a few hundred women protested violence, discrimination, and the notion that women’s clothing instigates sexual assault. 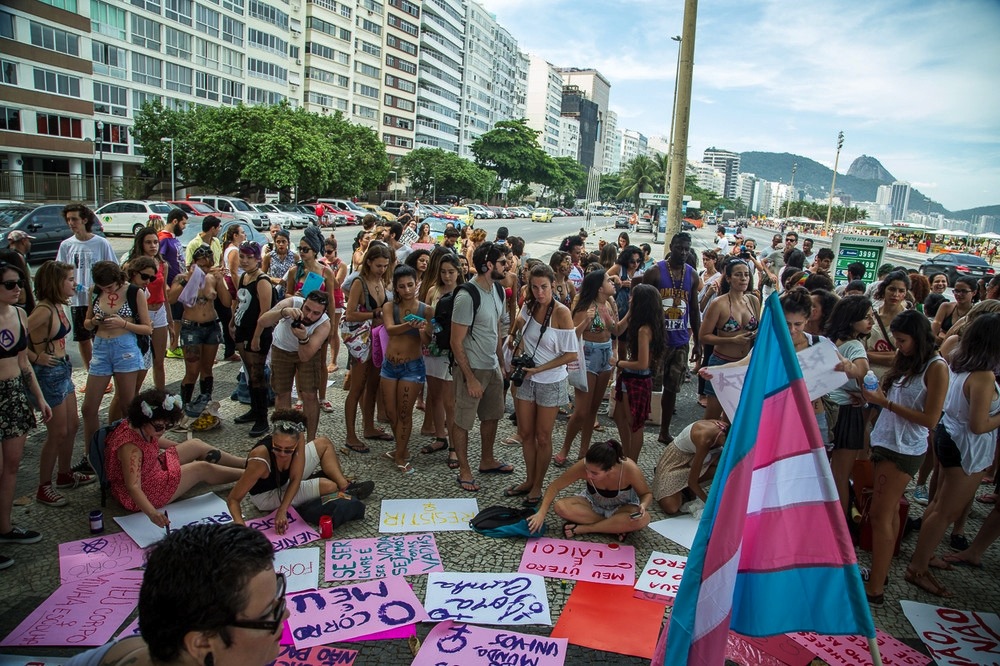 Together, the marches, the data, the media articles, the social media debates and the apps amplify a forceful and urgent need for greater respect for women, regardless of the specific issues at stake. And the action isn’t over. Next week, for example, the Prostitution Observatory will host a course titled “A Particular Revolution: The Brazilian Prostitutes’ Movement,” highlighting another complex facet of women’s rights that needs greater and more open discussion.

Activists have claimed space in the media to declare a “feminist spring,” asserting that “the place of a woman is in politics.” Activists Helena Zelic and Sarah de Roure argue that this “feminist spring,” coming on the heels of a “conservative winter,” will have lasting results: “Our daily struggle gains force as a permanent action in defense of our lives, our bodies, and an agenda that proposes to change the world through feminism.” The success of feminism, however, must be judged on its ability to raise the status of and respect for all women, especially those most marginalized.