Five youths were machine-gunned dead inside a car by Military Police in the Complexo da Pedreira favela in Costa Barros in the North Zone of Rio. Wilton Esteves Domingos Júnior, aged 20, Wesley Castro Rodrigues, 25, Cleiton Corrêa de Souza, 18, Carlos Eduardo da Silva de Souza, 16, and Roberto de Souza Penha, 16, were on their way to get a snack when Military Police opened fire on the vehicle, killing all five. The car was hit by over fifty bullets. The group of friends had been out that night to Parque Madureira to celebrate Roberto’s first paycheck from working at the wholesalers Atacadão.

Four Military Police officers from the 41st Battalion of Irajá have been arrested in connection with the crime, thanks to the local population that denounced the massacre both online and through testimonies filed at the local police station. Thiago Resende Viana Barbosa, Marcio Darcy Alves dos Santos and Antonio Carlos Gonçalves Filho were arrested on charges of murder and procedural fraud and Fabio Pizza Oliveira da Silva for procedural fraud. The officers had altered the crime scene to register the incident as an act of self defense. According to community news site Guadalupe News, officers used a glove to remove the car keys and tried to plant a toy gun in the trunk. The commander of the 41st Battalion, Marcos Netto, was removed from office on Monday, November 30.

In an interview with the newspaper EXTRA, a witness and local resident said: “They tried to forge the scene to show they were criminals, but they weren’t. I know them all really well.”

The devastated parents of the five youth are filing a collective lawsuit against the state. Speaking to EXTRA, Jorge Roberto Lima da Penha, a welder and father of Roberto de Souza Penha who was killed on Sunday, said: “The boys will never return, but this gutless execution cannot go unpunished.” He also reported that the Military Police hasn’t offered to help with any of the funeral costs of the deceased youngsters, saying: “No one has phoned. No one has said anything or offered any kind of assistance.” 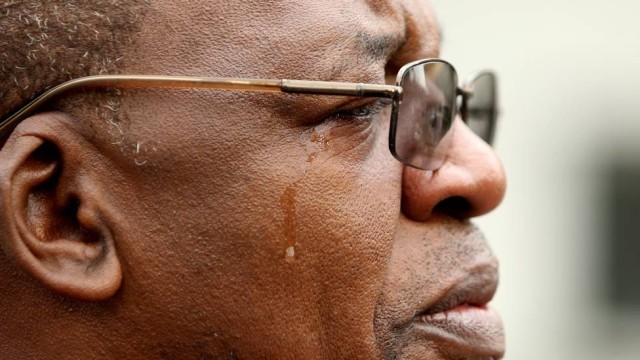 The horrifying crime has caused widespread outrage on social media, with commentators, favela groups, activist collectives and community media sharing posts in solidarity with the victims’ families, denouncing the deeply shocking actions of the police officers, and framing the murders within the context of racist, fatal violence regularly committed by Rio’s Military Police, Brazil’s most deadly.

Many commentators expressed indignation over yet another five black favela youth killed by police and pointed to the racism inherent in police operations. Juliana Portella, a community journalist from Nova Iguaçu, wrote: “What do you mean the police shoots a car with five black youths in Costa Barros and racism doesn’t exist? It’s an issue of color, and of class! The Military Police exterminates black favela youth.” She concluded by quoting the lyrics of the famous Brazilian song, ‘A Carne‘ (The Meat): “The cheapest meat in the market is black meat. He goes for free to prison, under the plastic sheet.”

Felipe Paiva, a photographer and tour guide from Vidigal, wrote: “The police alleges that two of the youth murdered yesterday had already had dealings with the police. But so what? Just for this they deserved 50 shots?!.. Looking at the latest cases of homicide caused by Rio’s Military Police, we can see the evidence that ‘criminals’ have a defined address and skin color. They are men, women and children who are mostly black and residents of the favelas and urban periphery. Just look at the cases of Amarildo, Claudia, the boy Eduardo… do you need more examples Governor Pezão?!”

Located in the far North Zone, the neighborhood of Costa Barros has one of the largest black populations in the city, with 70% of residents identifying as black or mixed-race. It’s also one of the lowest income, with an average monthly salary of R$424. The interplay of race, geography, poverty and state violence in Rio is tragically underscored by Sunday’s events. 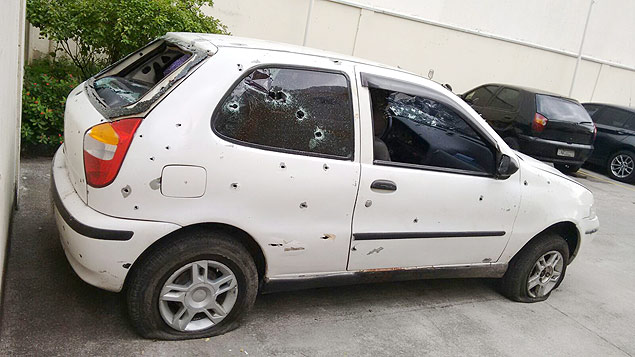 A Facebook post by history professor Luiz Antonio, in which he points to the historic, racist origins of Rio’s Military Police as created to protect the elite from the people who are “dangerous and of color,” has been shared over 1,200 times. He concludes: “The discussion about what went wrong with the police comes from a mistaken assumption. The problem isn’t that it went wrong. It’s that it went right.”

Douglas Belchoir wrote on his Negro Belchoir blog for Carta Capital: “A group of youths were in a car with all the correct documentation, licensed driver and unarmed. What there could justify the police’s actions? Them all being black? Beyond this remains the perplexity in the face of the unbelievable capacity of Brazilian society to coexist with the black genocide. I’d ask the collective tranquility, if I could: and what if it were white people of the Globo-South-Zone standard shot and killed?”

Ronilso Pacheco, a researcher from São Gonçalo who works with the NGO Viva Rio, argued that the responsibility for Sunday’s tragedy doesn’t merely fall with the individual police officers but with the institution of the Military Police, the media, society as a whole, the churches, the state and government and the legal system in a broad social structure which marginalizes black youth. In a post that’s been widely shared on Facebook he wrote: “Once again they’ll punish some police officers and say the issue’s been dealt with. Until the next shooting, and another, and another, and another. We’re specialists in this: shooting and executing poor, black youth, finding half a dozen scapegoats to take the blame, and continuing killing this race that doesn’t deserve to live.”

Police killed over 5,000 people in the city of Rio in the last ten years. Activist groups are calling for action with Amnesty Brasil promoting a petition which calls for full investigations into all deaths caused by police, restricted use of firearms by police officers and psychological, legal and financial support for all victims’ families.

This Thursday, December 3, a protest will be held at Parque Madureira in memory of the five young men killed in Costa Barros calling for an end to the genocide of black youth. Organizers are asking people to attend wearing all black, “to show that we’re grieving and that the white of peace never contemplated the black population.”