The atmosphere was tense on the evening of Monday January 18 as nearly 30 people gathered in a circle in an abandoned hotel in the neighborhood of Santo Cristo in Rio’s Port Region. This group calls itself the Vito Giannotti Occupation after the famous social movement leader in Rio who fought for populist causes and rights for workers. The group chose this name because January 15, the day the group took over occupation of the hotel, was Giannotti’s birthday.

The occupiers, who consist of people in need of housing, activists from four nationwide social movements and students from local universities, entered the building at 3am on January 15 with little opposition. The movements involved were the Center for Popular Movements (CMP), the Movement for the Fight for Neighborhoods, Villages and Favelas (MLB), the Landless Worker’s Movement (MST) and the National Union for People’s Housing (UNMP). 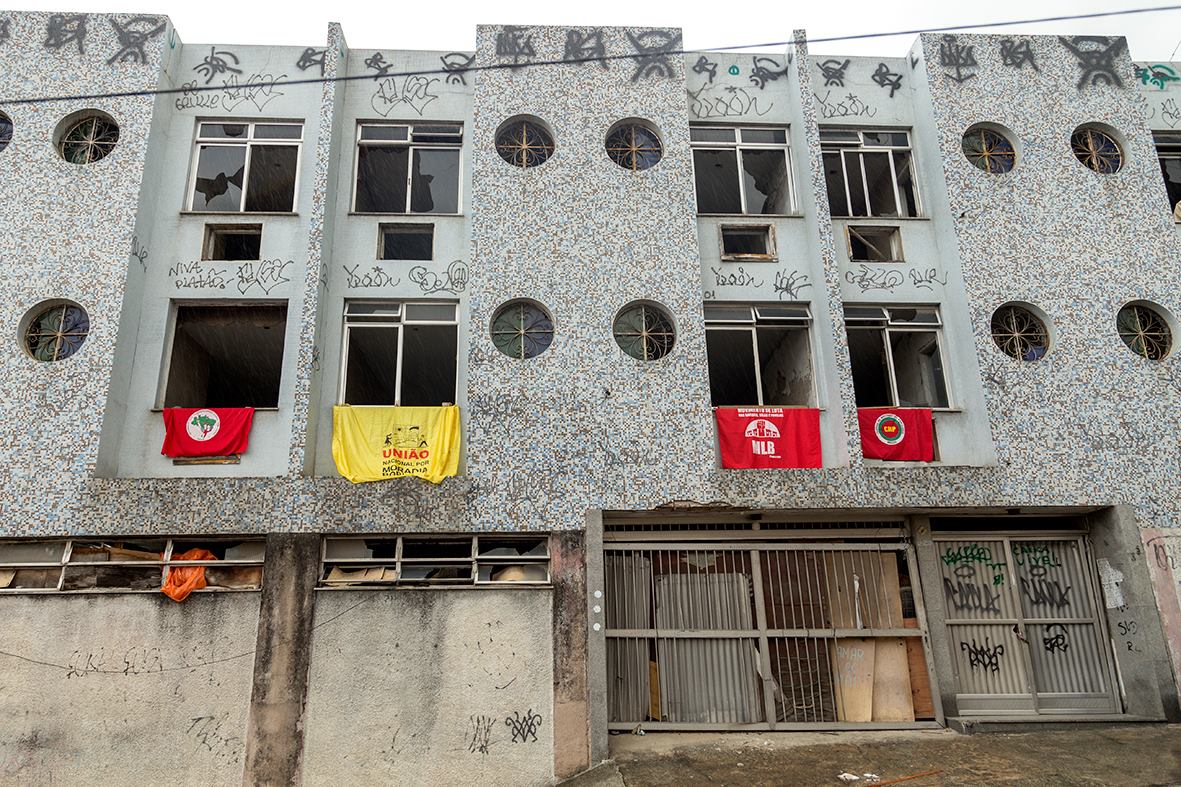 Occupation of the abandoned hotel came after a long deliberation between the social movements. The hotel, now vacant for more than ten years, is owned by Brazil’s National Institute for Social Security (INSS). Another Brazilian government organization, the Ministry of Cities, has been in deliberation with the INSS for many years to sell the hotel so it can be converted into affordable housing apartments. Since no progress was being made on negotiations between the INSS and the Ministry of Cities, social movements decided to move forward with the occupation.

The leaders participating in this occupation find it absurd that such a structurally sound building could be left vacant for so long when there is such a lack of adequate housing in the Port area. As one of the occupiers said: “This fits with a saying we have here in Brazil: ‘Many people without homes, many homes without people.’”

Having now closely investigated the building, leaders have found that structure is strong, but that major renovations to add water, electrical and Internet capabilities will still be necessary.

While supporting urban occupations such as this is not new to any of the four participating social movements individually, this strategy for occupation is notably different than others because they are all working together. Each of these national organizations is leveraging its networks to spread the word and lobby government officials. They are widely using social media to get information out, making the occupation very visible from the outset, which is rare among urban occupations. Such occupations traditionally work to stay under the radar–living in constant fear and remaining very vulnerable–until they are more established.

Those occupying the hotel are both anxious and optimistic. They speak in hushed voices during meetings so those on the outside cannot hear. Although they do not anticipate facing extreme force by the government, there is the constant fear that the police could show up outside the hotel at any moment.

Yet the residents are hopeful for their plans to transform the hotel into roughly 28 one- and two-bedroom apartments. One leader from the CMP spoke excitedly about plans to establish a community center in the hotel’s large rooms for the communities in Santo Cristo that lack a gathering place. There were also discussions about using part of the converted building as a place where social movement leaders themselves would be able to live. The occupiers are currently working with a team of lawyers to continue ongoing negotiations with the federal government bodies over the future of the building.

Occupiers in the hotel were passionate about the need to have better access to quality, affordable housing in the city. With the upcoming Olympics, many communities have suffered evictions and other pressures that are uprooting them. Occupiers are indignant that the government does not respect the self-made homes and lives that have taken years to build and complete.

As of January 20, the group has succeeded in occupying the hotel for five days.