For decades, media coverage of Rio de Janeiro’s favelas characterized these neighborhoods as peripheral and violent, documenting organized crime, armed robberies and homicides as somehow inherent to the informal city. As misconceptions of the nature of violence and crime in favelas flourished, academics have worked to deconstruct fallacious narratives and provide clarity and depth in our understanding of the production of violence.

The latest example of this work is The Spectacular Favela: Violence in Modern Brazil by Erika Robb Larkins. Based on fieldwork conducted between 2007 and 2014, Larkins offers an ethnographic account of the production and commodification of violence in Rocinha, the largest and one of the most famous favelas in Rio. She effectively weaves academic theory with interviews and experiences from her fieldwork, creating a thoroughly informative and accessible portrait of contemporary violence in Rocinha.

Larkins writes that armed violence, at the hands of traffickers and police alike, is “not quiet or silent but performative.” It is subsequently consumed by both Brazilian and international audiences, through news coverage, music videos, films and video games. Understanding how these processes of production and commodification interact is therefore critical when considering the role of Rocinha both in the city of Rio and in the context of the newer global imagining of favelas. Larkins meticulously disentangles intertwined forces of violence, focusing primarily on the narco traffic, the penal state, popular representations of the favela, and the burgeoning market of favela tourism.

Larkins begins her analysis of Rocinha’s narco traffic through her conversations with Beto, a trafficker responsible for security. Though Beto’s trajectory of involvement in a gang is representative of many others’ experiences, his previous work in the Brazilian military points to the complicated relationship between the State and traffickers.

In her examination of traffic governance in Rocinha, Larkins explains how the narco traffic in Rocinha employs language to legitimize their role, often referring to their organization as a corporation or a state independent of the formal city and local government. Traffickers also utilize violence and spectacle in their establishment of control in neighborhoods. Under the lei do tráfico, or “traffickers’ law,” traffickers frequently punished residents who violate their rules publicly in order to reinforce authority.

Many of the police invasions Larkins observed were similarly staged for public consumption. Though these operations usually led to minimal direct confrontation, as traffickers were often warned beforehand, the representation of these events “as a clash between heroic forces of the state and enemy gang members is fundamental to understanding how the favela is policed.” The theatricality of policing in Rocinha is conducive both to the circulation of news coverage and for subsequent depictions of the favela as a de facto war zone in popular culture.

The favela has become an internationally recognized element of Rio de Janeiro’s landscape, serving as a backdrop for countless music videos, films and video games. The representation of favelas in these mediums has led foreign audiences to view them as places of violence, organized crime and poverty.

Larkins argues that the increased demand for a favela aesthetic has contributed to the production of what she identifies as “Favela, Inc.” In her analyses of favela representations in various mediums, Larkins points out that producers of this “brand” almost never come from the favelas they depict, and base their curated favela on stereotypes and mass market appeal. She explains, “The aesthetics and discourses of Favela, Inc. obscure the larger historical, economic, and political factors that contribute to the reality they purport to represent.” In this sense, “media discourses surrounding the favela are not only about the violence imagined to take place there, but are forms of violence in and of themselves.” 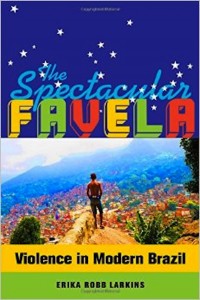 As tourists have poured into Rio in record numbers in recent years, the demand for favela tours has increased exponentially. Rocinha is purportedly the fourth most popular tourist destination in Rio after the Christ the Redeemer statue, Sugarloaf Mountain and Copacabana beach. Favela tourism, though controversial, continues to attract foreign visitors who want to see another side of Rio—one that they associate with films like City of God and Elite Squad.

Larkins describes the new market for favela tourism as “the embodied consumption of the violent favela brand.” The principal objection to the tourism industry in Rocinha is the limited economic and representational benefit that residents receive. This, Larkins argues, is yet another form of violence that ultimately marginalizes residents and benefits only a small number of outside individuals who profit from the industry.

The Spectacular Favela brings essential context and substance to debates surrounding not only policing and violence in Rocinha, but questions of the representations of favela culture and social agency of favela residents more broadly. It will be particularly important to consider the implications of the commodification of violence and the favela aesthetic as reporters, celebrities and tourists from around the world descend upon Rocinha and other Rio favelas in the build up to the Rio 2016 Olympics.