Around 250 people gathered in Vila Autódromo on Saturday, February 27, for the official launch of the updated award-winning Vila Autódromo People’s Plan, designed by Vila Autódromo residents with technical assistance from researchers at the Federal University of Rio de Janeiro (UFRJ) and the Fluminense Federal University (UFF). The event came after a tense week in the community, with the demolition of the neighborhood association and Heloisa Helena Costa Berto’s house, and the threat of the demolition of Maria da Penha’s house.

“Upgrade Now, The Vila Will Stay!”

The morning began with residents, supported by students, marking the community’s existing lots, in accordance with the People’s Plan. Those who had come to support the community were entertained by a company of clowns from the Free School of Clowns, while children drew their own “Little People’s Plan,” showing how they want Vila Autódromo to be developed.

After lunch, residents prepared to host the launch event in Penha’s house, but had to move to the community’s playground to accommodate the vast crowd which had assembled. At the launch community leaders, such as Maria da Penha, Sandra Maria and Jane Nascimento, as well as two of the urban planners who had led the technical team on the People’s Plan–Carlos Vainer and Regina Bienenstein–spoke to those assembled. They described the struggle to remain on the land up to this point, and their hopes moving forward, which are detailed in the Plan.

Maria da Penha opened the speeches, declaring that although “the Association fell, we have not.” She continued on a personal note: “I’m not giving up my rights, nor my house.”

She went on to explain that the City at times argues that Vila Autódromo can’t stay because “there is no way to upgrade the community,” arguing that the People’s Plan shows that this is a lie.

Sandra Maria took the microphone next, and used her speech to challenge Mayor Eduardo Paes to keep his word and allow the community to remain. She and other residents at Saturday’s event launched a challenge to all supporters of the community to upload videos of themselves to social media calling on the Mayor to keep his word using the hashtag #UrbanizaJá (Upgrade Now) to track the videos.

The head of Rio’s Housing Nucleus at the Public Defender’s Office also spoke, guaranteeing his office’s support for the community’s struggle.

Carlos Vainer from the Federal University of Rio de Janeiro spoke about the need for upgrades, saying, “Housing isn’t just a house, it is integration with the city.” He looked upwards toward the new hotel being built for the Olympics and said: “They don’t want the residents of Vila Autódromo as neighbors, but the residents want to integrate.” Penha chimed in: “And remember we were here first!”

At various points in the speeches, the crowd broke into chanting “Upgrade now, Vila Autódromo will stay!”

Many residents used their speeches to thank the mass of supporters who had joined them in the community for the event, as well as during the week as they resisted the demolition of Maria da Penha’s home, a symbolic center of the resistance. 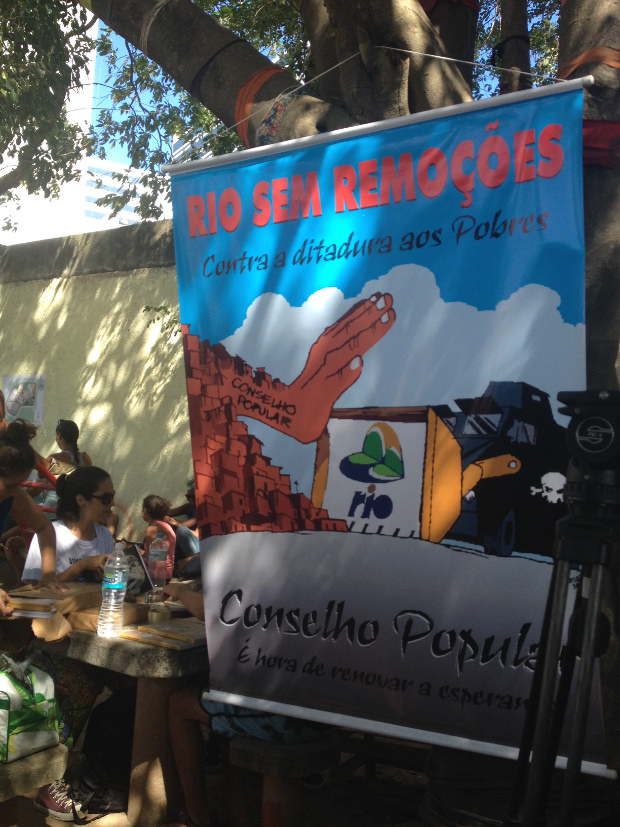 With the official launch of the updated Plan, residents affirmed their desire to stay in the community, with upgrades. Original plans for the Olympic Park from global infrastructure firm, AECOM, had shown the majority of Vila Autódromo co-existing with the Olympic Park. Furthermore, Mayor Eduardo Paes has repeatedly stated that residents who want to stay can stay, but the actions of the City on the ground do not match his words.

Psychological intimidation and lightning evictions have been used to decimate the community, in a campaign that has cost the City well over R$200 million, 16 times more than the estimated cost of implementing the People’s Plan. The People’s Plan represents a vision for Vila Autódromo not just to stay but to flourish, and this vision was rewarded, with a prior version winning the prestigious Deutsche Bank / London School of Economics UrbanAge award.

The People’s Plan has been updated to reflect the demolitions that have been carried out as well as projecting plots for all residents who have elected to stay and do not have interest in negotiating compensation with the city. In addition to the construction of a new neighborhood association, the Plan proposes restoration of Vila Autódromo’s community garden, a community daycare, multi-use space to hold events in the community, a small park, and an expanded sewage and drainage system.

The Plan has been well received for its technical merits, having been shown to align with UN-Habitat ideals for good design. Beyond this, the Plan was a participatory effort between the community and academic partners. Vainer said, “The Plan is not a drawing. The Plan is made from courage, passion, and struggle.”

Despite the intensity of the struggle and the heightened tension of the past week, the event was an inspiring celebration of ongoing resistance bursting with solidarity from supporters and renewing optimism for the implementation of the People’s Plan.

Amongst those assembled were residents, community leaders, politicians, public defenders who have worked on Vila Autódromo’s case, and advocates who have kept vigil in Vila Autódromo over the past week in the face of demolitions. Supporters from other communities, such as City of God, were noted to have sent support. Penha told the crowd that the situation brings her “sadness, but so much happiness that you all are present.” Even construction workers building the Olympic Park next to the playground stopped to listen to the lively speeches.

At the end of the event, activists made calls for supporters to maintain a presence in Vila Autódromo. They first emphasized the importance of maintaining the vigil in the community this coming week, and then talked about a more long-term presence. A standing invitation to hold events such as capoeira groups and theater in Vila Autódromo was extended to the crowd. This coming Saturday, March 5, will celebrate the launch of Raquel Rolnik’s book, War of Places: The Colonization of Land and Housing in the Era of Finance. Raquel Rolnik, recently UN Special Rapporteur on Adequate Housing, is a professor at the University of São Paulo and a long-time advocate of Vila Autódromo.

The coming week will again be crucial as residents and supporters attempt to halt the removal of Maria da Penha’s home, a key site of resistance. Placed under a demolition order last Monday, residents expect the City to attempt a demolition at any time, and are constantly vigilant. They remain hopeful however, and the display of support at the launch event visibly renewed residents’ morale. As Penha put it: “The fight will continue.”