“When my friends began University, their parents gave them a car and a laptop, so they could carry texts without hurting their backs. My father gave me a RioCard (for the public bus system), a sturdy backpack and told me I was going to be happy,” jokes Jessica Oliveira, a second year Social Communications student at the Federal Rural University of Rio de Janeiro. According to the Constitution, education in all of its phases is a right and a duty for all. From this then, one may conclude that education is a public right. So, what to think when both quality schooling and higher education are reserved for a restricted class of people? 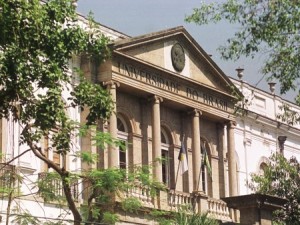 The idea that “only the good ones go to university” forces us to reflect on the idea of ​​equal education, in which failure and success depend solely on the talents and merits of each student. In 2010, an internal survey conducted at the Federal University of Rio de Janeiro (UFRJ) found that 65% of the student body at the “University of Brazil” have a per capita income five times the minimum wage or higher, as well as living within Rio de Janeiro city limits.

“With the help of a scholarship, I spent four years studying for the university entrance exam,” explains Christine Thayer, 22, a history student at the Federal University of Rio de Janeiro. “I have not stopped working, and when I was admitted into the program, I chose to attend night classes, recognizing my need to continue working throughout my studies. It is difficult for a student of a modest background, like me, who has a daughter, to stay in university. Our income is an integral part of the entire family income,” concludes the second year student who celebrates being one of a select few granted the highly competitive “Bolsa Auxilio” scholarship.

The decision of who enters and who will remain in school is determined at the elementary level. The school, in essence, belongs to the middle class. For instance, the objects chosen for study, how you talk, write and behave. The Eurocentric curriculum prizes certain language and cultural norms that oust popular knowledge, ultimately cutting off certain students from the moment of entry.

“The road to university presents itself as a semi-impossible path. There is an urgent need for students to get their first job. There is an unspoken yet internalized understanding that ‘university is not for you.’ For the middle class, transition from school to college comes as naturally as drinking a glass of water. For students coming from the city’s outskirts and working class suburbs, the port of entry is more like a wooden staircase without steps, and students like uninvited guests to a party,” comments Prof. Dr. Carmen Teresa Gabriel of UFRJ.

Results from the latest census show that only 30% of the population coming from lower social classes makes it to higher education, with less than half being admitted in public universities. Only 0.58% of students admitted annually in Federal universities are from families earning under minimum wage, and 4.05% from families earning between one and three minimum wages. The University “Olympus” boasts of its republican, secular, egalitarian and liberal character. The university confirms its nature as a social institution and as such determines the structure and functioning of society as a whole. So much so that within Federal universities, we see numbers reflecting the socio-cultural division that exists in this country. 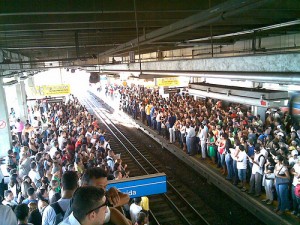 “It is not just about getting into university, and passing the entrance exam. Actually being a student is the tricky part”, explains John Raphael Ramos, a freshman studying Social Sciences at UFRJ. “For example, I live in Anchieta and even though my house is closer to the metro station, I prefer to take a bus and suffer through endless traffic jams because it’s cheaper,” adds the 21-year-old who in addition to being admitted to UFRJ, is celebrating a new job.

The myth of equal opportunity means that those who fail – whether in elementary school or on the university entrance exam – blame themselves and feel ignorant and inferior. “I will most likely have to work next year,” says student Shayne Abranches who is disappointed with his performance on the ENEM entrance exam. Meanwhile, the few who do succeed are used as an example that it is possible to struggle and overcome the obstacles to reach university. Ultimately, this is an exception to the rule that ultimately keeps every piece of the machine “in its place.”