The Julio Otoni favela in Santa Teresa sits on one of Rio de Janeiro’s many hills, looking out towards the Guanabara Bay. From the top of the favela you can see both Sugarloaf Mountain and Christ the Redeemer, two of Rio’s most famous tourist attractions in one amazing panorama. The community is home to 400 families, more than 2,000 people in total.

The first families settled in what was to become Julio Otoni in the 1940s. Community leader Sizenaldo Marinho‘s parents arrived in the 1950s from theNortheast of Brazil in search of work.

“I am 47 years old, I was born here in the community. My parents have lived here for more than 50 years. When they arrived it was an extremely small community. There were only 16 families, but over the years the population grew. Some families extended their homes and rented rooms for people to live. Usually the people who came here to live in rented rooms ended up staying and building their own houses.”

“My first memories here from when I was a child are that there was lots of fruit, lots of trees. When I was young I lived inside the forest, picking fruit. Guava, mango, banana, avocado… Not far away there was an orchard, it was huge, so we played there and went there to get fruit. I almost never ate at home, I ate in the street, or with the families of my friends. The families were more united back then…

“The memories I have of back then are of a lot of space. We played games that nowadays kids don’t play as much, like rope, spinning tops, football, and kites. At night we would get wood and make a fire and the adults would tell us stories… I had a lot of freedom, I stayed out until late barefoot with my friends. Back then people got together more often, they hugged more. That’s the memory I have of being a child here.”

Sizenaldo’s mother, Maria de Lourdes has a different memory of how the community was when she first arrived. Born in Recife in the state of Pernambuco, she moved to Julio Otoni 52 years ago. “We didn’t have running water, we didn’t have electricity. The forest was very thick back then, no one could cut it because there were forest wardens who took care of the trees. My house was the last one in the community, next to the forest.

“Everyday at 5pm I would go down and wait for my husband to come home from work because I was scared there was someone hiding in the forest. From then on I started to raise a lot of dogs, we had seven dogs to guard the house. I was often home alone and my son was still very young.”

Much has changed since then. Sizenaldo’s mother’s house is no longer the last in the community, and the forest is cut back further. Houses were built higher up the hill as the community expanded.

The community experienced the most growth during the 1990s. During this period Julio Otoni was occupied by drug traffickers, who encouraged the influx of people. “The bigger the favela was, the better for the traffickers because that way they had more escape routes, they had more clients, they had more places where they could hide… For them it was good that the favela was getting bigger,” says Sizenaldo. Since 2013, Julio Otoni has been covered by the Pacifying Police Unit (UPP) program jointly with the nearby Cerro-Corá favela, but although there is a police presence, other government services such as sanitation, education and health have not improved.

The community has strong cultural traditions, for example holding an annual celebration for Brazil’s Black Awareness Day on November 20. “It’s the day of Zumbi dos Palmares, one of our first black heroes. We organize an event in the community. It always turns out great, the other residents of my street help me. We always do a big event to remember Zumbi, it’s very important,” Sizenaldo says. 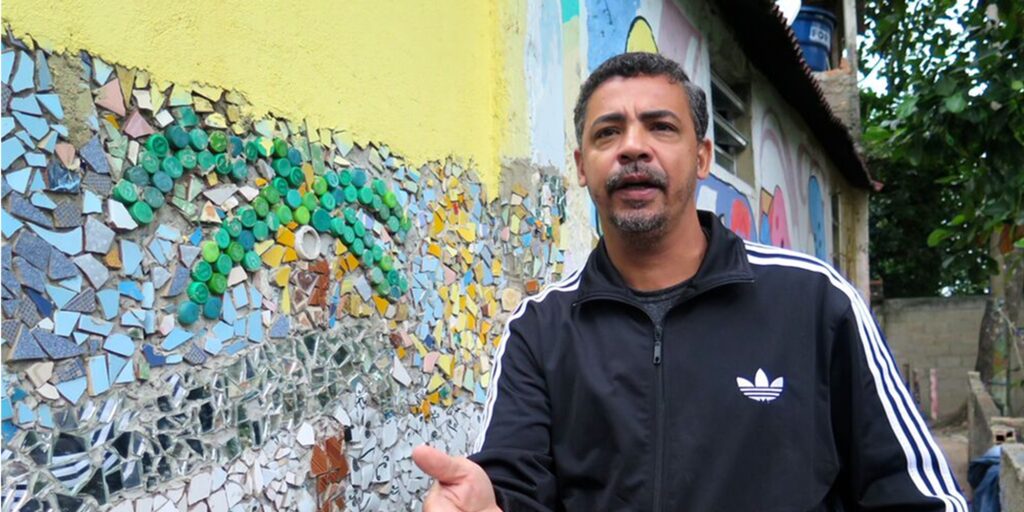 “We had 26 adults, and we joined up with another course of 18 adults who didn’t know how to read or write… I spoke to my friends and told them what I wanted to do. I went down to the Candido Mendes University and managed to get chairs, tables, book donations to make a library, teaching materials, all for free for the adult students. And it was amazing.

“When the class was over I cried. I cried and cried because we interviewed them and asked why they wanted to learn to read. They said ‘When I go to the supermarket I don’t know what I’m buying. I don’t know if it’s a good product, what variety it is, and I want to know.’ and ‘My children go to school and sometimes they ask me something and I don’t know how to answer my son,’ and ‘I drive, but I don’t know the names of the street!’ It’s very important.”

Sizenaldo affirms there are still many demands to be met by the government in the community: “Nowadays there is speculation and gentrification in some favelas. But that is very far away [for Julio Otoni]. The reality here is very different. The issue here is that the government never looks to the favela. Never. Just during election time, to win votes. Sometimes I like to say that in Rio de Janeiro in one street, one corner, one block, there can be two totally different realities. It’s incredible.”