While much media coverage of Rio 2016 asked searching questions about Rio and what the future holds for its people, much less attention was paid to the future of the Olympic Games or, in particular, the International Olympic Committee (IOC). Problems inherent in Rio’s operations have been scrutinized, while much less has been said of the problems inherent in the IOC. HBO’s recent long episode of Real Sports, aired on July 26, brings the challenges facing sport’s Lords of the Rings into clear view, by detailing the recent history of the Games. Looking particularly at the Beijing 2008 Summer Olympics, the Sochi 2014 Winter Olympics, Rio 2016, and Oslo (which dropped out of the race to host the 2022 Winter Games), the unmissable episode of Real Sports presents an incredible range of detailed interviews and data which together paint a clear picture of a corrupt and abusive organization. Throughout the production of the documentary, IOC officials were offered many chances to be interviewed, but refused.

Rio’s issues are covered well and in detail, with interviews in Vila Autódromo, where Sandra Maria told of her excitement when the city first won the bid, only to learn later of what it would mean for her: her home destroyed and community torn apart. In Rocinha, José Martins of Rocinha Sem Fronteiras detailed the health problems stemming from the poor sewage treatment system, while the government spends money on Olympic stadiums.

HBO also told of the healthcare emergency in the state of Rio, with a doctor testifying that people have died because of the funding which has been diverted to the five-ring party, describing it as a “crime against humanity.”

The Guanabara Bay doesn’t escape the critical gaze, detailing the promises of remediation the government made and subsequently abandoned, and warning of the potentially deadly diseases that could result for sailors–and indeed did, with one Dutch sailor contracting dysentery during the Games.

The athletes who dedicate their lives to competing in the Games are the center of the IOC’s business model–yet as US runner Nick Symonds observes, they get very little, if any, of the massive revenues the Olympics brings to the IOC. Athletes are even banned from making their own money at the Games through sponsorship–to protect the commercial interests of the IOC. Yet this is hardly surprising, when many of the same people who were involved in the Salt Lake City scandal continue to serve on the IOC, as well as convicted criminals. Despite its lofty rhetoric, the organization is about as undemocratic as they come, and IOC members are accountable to no one, happily drawing out an allowance of US$900 per day for gracing the Rio Games with their presence. All while previous host cities like Athens resemble graveyards for stadiums.

Looking forward to the 2020 Tokyo Games, it is noted that the Games may have been secured through bribes, with investigations into payments for African IOC votes ongoing. Allegations of votes for sale are nothing new to the IOC–the scandal at Salt Lake City forced them to push through some limited reforms. But these reforms haven’t purged the IOC of corruption, with undercover video showing one IOC member Ivan Slavkov saying he was “open to negotiations” about where he would vote for the 2012 Olympics. His handler is then shown bragging that “he [Slavkov] will convince his closest friends to take money”. Slavkov has since been removed from the IOC, but the IOC’s response to corruption remains reactive, as if they’re saying to members ‘take bribes, just don’t get caught’. The IOC’s shadowy membership includes to this day “convicted criminals… people who were part of the Salt Lake City bribery scandal that continue to serve in senior positions… two people who have been accused of plagiarizing their PhD.”

Further in the future, the 2022 Winter Olympics will be held in Beijing, after the IOC’s preferred city, Oslo, dropped out of the process. Norwegians were unwilling to put up with a “semi-corrupt” organization and their extravagant demands, which combined to form a 7,000 page document and included “24 hour room service including butler service” and “continuous access to sufficient food and drink of high quality (snacks and canapes are not good enough).” Jacob Lund, a Norwegian sports executive, observed that the IOC “seem to feel somewhere between us and God.” They are a privileged elite, he goes on to say, who “want to travel around the world and be treated like kings.” Fritijhof Jacobson, a political commentator, says Oslo dropped its bid for the 2022 Winter Games because “it was just this semi-corrupt entity of people who lived on a different planet and said ‘we come to Norway, just give us everything we want.'”

But was Beijing 2008 all that impressive? Certainly, it was a spectacle unlike any other, but it was also built on the blood and tears of the Chinese people. With a ruthless efficiency, China prepared for the Games, banned press from describing the horrific evictions which involved literally dragging people from their homes. While 80,000 people were evicted for the Games in Rio, some estimates (accurate figures are unavailable) for Beijing’s Olympic evictions put the figure close to 1.5 million people. People who complained and were savagely beaten and then arrested during the Games to stop them talking to the press. Even now, years later, they remain under surveillance to keep them from speaking.

The Chinese government managed the Games to project their power, using their totalitarian powers to ensure nothing was out of place. A defect in powdered milk for babies went unreported so as not to cause any distraction, with the lives of children apparently not as important as China’s big moment. Para-athlete Fang Zheng had been looking forward to competing in his home Games, but his place on the team was taken away as he had sustained his disability at the hands of the government in the infamous 1989 protests at Tiananmen Square. He was then placed under arrest during the Games for good measure–along with many activists who had tried to get a fair deal from China’s Olympics. Teng Biao, a human rights activist and lawyer who asked the IOC whether the Olympics should “coexist with labor camps, secret police and crimes against humanity” was kidnapped and tortured during the Games and told to “forget the law.”

Hein Verbruggen, the IOC member responsible for overseeing the preparations for Beijing 2008 claimed that the IOC had no business interfering in the application of Chinese law–despite then-president of the IOC Jacques Rogge claiming the Olympics would bring improved human rights to China. Asked whether the Chinese government’s intolerance of dissent is an asset when organizing the Olympics, Verbruggen, the only IOC member interview in the entire documentary, hesitates before confirming “yes, it is.” He remains unaware of the evictions of hundreds of thousands of people, preferring to believe the promises of the Chinese government over the concrete reality presented on film. Asked about the list of banned topics for reporting issued to journalists, Verbruggen could only respond that they didn’t need to ban reporting on food safety issues because “the food was excellent.” When asked about detention of activists like Teng Biao, Verbruggen simply said “what is illegal detention for us is not for them.”

More evidence of the IOC’s disregard for human rights can be found in Sochi, Russia. Migrant workers building the stadiums weren’t paid correctly, and weren’t given the correct safety equipment–unless they were lying on the floor dying after a fall, in which case they were given the equipment so bosses could blame the death on the worker’s failure. In one case, a worker complained and was brutally beaten and violated by a crowbar at the hands of the Russian police. As undocumented migrants, these workers were at the mercy of their bosses who held their passports. When talking to a woman who had her home destroyed to build a new road for the Games, the HBO journalists themselves were arrested–a sure sign of how well Russia takes criticism of their Olympic moment, even years after it has passed.

The main issue of contention here for HBO was that authoritarian governments are using the Olympics to gain further power–that the Olympics are being used as a political tool. Former chess grandmaster turned politician Garry Kasparov is unequivocal that the IOC should take some of the blame for the current situation in Ukraine, claiming they emboldened the Russian president. HBO point to other historical events as evidence that totalitarian regimes are boosted when the Olympics come to town, also looking briefly at Moscow 1980 and of course the infamous ‘Nazi Games’ of 1936. The documentary correctly points out that these governments are easier for the IOC to work with, due to their intolerance of dissent, while democratic cities like Oslo (as well as Boston, Hamburg, Krakow, and others) are refusing to host the Games due to the excessive demands of the IOC.

This future doesn’t look pretty for the Olympic Games. That said, Real Sports could easily have been even harder on them. The documentary implies that authoritarian governments are coopting the Olympics to their own ends–leaving out that this is exactly what every host government, authoritarian or allegedly democratic, does. Real Sports at least leaves space for someone to sweep in and save the Games, with all the bidding cities for the 2024 Games (Paris, Los Angeles, Rome, and Budapest) in democratic countries–although it could be argued Hungary is increasingly totalitarian. HBO makes no mention of London, Vancouver, Turin, Sydney, Atlanta, and various other demoractic cities where the Olympics have left a trail of destruction in their wake–only focusing on Olympic events in BRIC countries. Nor do they mention the people threatened with eviction in Tokyo’s Meiji Park to make space for the stadium, or the environmental destruction in Pyeongchang, host of the 2018 Winter Olympics. 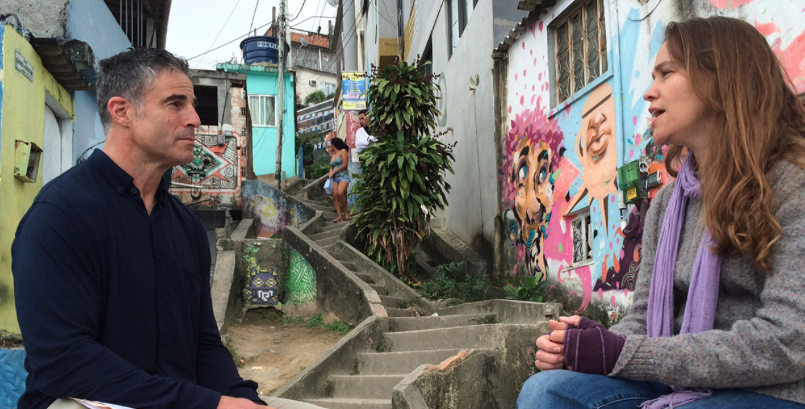 In the documentary, Catalytic Communities’ Executive Director Theresa Williamson suggests that Rio has shown the world what the Olympics do to cities–everyone else is now on alert, she says. Everyone knows Rio’s Olympics had a plethora of problems, but the difference between Rio and Beijing or Sochi is that it was far easier for Cariocas to tell the world about these problems. Even with all of Rio’s problems, this documentary shows that of the recent Olympics held in BRICS countries, Brazil has ultimately done better than China and Russia–the difference in Brazil is that the world knows about the problems as journalists were allowed to do their job. The world needs the IOC to wake up and realize that their cherished event is damaging cities and people’s lives, and that hiding behind the suppressive apparatuses of authoritarian governments isn’t a viable option.