For the original article in Portuguese by Alana Gandra published in Agência Brasil click here. 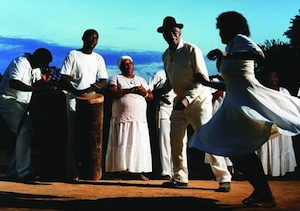 Defense of land title and the sustainability of Quilombo territories is top priority for the Quilombola communities* that will participate in June’s People’s Summit. The event, organized by Rio civil society, will be held in parallel to the United Nations Conference on Sustainable Development, Rio+20, in Rio de Janeiro.

Quilombo leader Damião Braga told Agência Brasil that little has been done in Brazil in terms of giving the remaining Quilombo populations title for the land where their ancestors settled. Titling is prioritized on paper, but  “in terms of objective action, nothing is done,” he declared.

On March 23rd Braga participated in the preparatory meeting for the seminar “Quilombo do Rio,” that will bring together representatives of all Rio state’s Quilombos on April 4th.

Damião Braga is President of the Quilombo Pedra do Sal (Arqpedra) and Coordinator of the National Front in Defense of Quilombo Territories. He declared that of the 5000 existing Quilombos in the country, “not even 10% have received title.”

Braga emphasized that various rights of the Quilombola community are threatened by legislation promoted by the agricultural sector being considered in Congress: “Various rights guaranteed in the Federal Constitution are being threatened by this sector.” One of the threats he cited is the Proposed Amendment to the Constitution (PEC) #215 that moves power for the demarcation of indigenous lands and the entitlement of Quilombos from the Executive Branch to the National Congress. The proposal passed through the Constitution and Justice Commission of the Federal Chamber and should proceed to a vote by the Senate.

He declared that during the People’s Summit, the Quilombolas intend not only to defend their rights to acquisition of title, but to the sustainability of these territories. “It’s not only about acquiring title. What we’ll discuss is the historical reparation that the Brazilian government owes our communities.” That reparation, he explained, will be implemented via both land title and preservation of the territories. “With certainty that no public or private actor threatens these territories in name of a development project,” he said.

Braga also informed that not all communities holding title have security of tenure. That is, they are not necessarily included in the General Real Estate Registry. Referring to the Pedra do Sal community, located in Saúde, a neighborhood in Rio’s downtown Port Region, according to Braga the area is suffering the direct impacts of the Porto Maravilha port revitalization project, that aims to prepare the city for the 2014 World Cup and the 2016 Olympics.

According to him that project “is nothing more, nothing less than an agreement between the federal, state and municipal governments to reclassify the Port zone.” He emphasized that “the government that has an obligation to entitle the Quilombos is the same government that is implementing a program that passes right over the community in function of a developmental objective.”

The Quilombola leader has positive expectations in relation to the People’s Summit: “This is the biggest international event of the past years. It’s not everyday we have access to such visibility and the chance to show the world what is happening to our communities. “

The National Front in Defense of Quilombola Territories is also organizing an event this April in Rio: a seminar at which Quilombo leaders from across the nation will be participating. The idea, revealed Braga, is to organize a meeting of 1000 leaders of Quilombos across Brazil at the People’s Summit in activities occurring both at the Aterro do Flamengo and also the Quilombola Pedra do Sal, in the Port Region. There, a special program will be implemented to politically strengthen the only Quilombola territory in the area.

*Modern-day Quilombos’ land and cultural rights were established in Brazil’s 1988 constitution. These are areas where direct descendants of freed slaves can still be found today. Their rights are akin to those of indigenous communities in Brazil.