As part of the release of The Resistance Against the Removal of Favelas in Rio de Janeiro, a book organized by Alexandre Mendes and Giuseppe Cocco, the Rio de Janeiro Public Defenders Office hosted a panel on October 27 with those involved with its Land and Housing Nucleus (NUTH). The book is a collection of essays about the work of the NUTH from 2007 to 2011. In 2011, the State began reassigning attorneys in NUTH to other divisions of the Public Defenders Office, and NUTH was temporarily closed. Some attorneys, like Mendes, ended up taking jobs as professors. Others, like Maria Lucia de Pontes, remained at the Public Defender’s Office in other divisions, and returned to NUTH when it was reestablished. 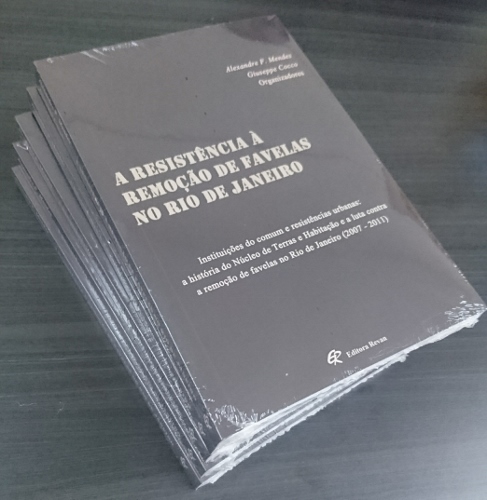 The panel was made up of current and former NUTH employees and community leaders who had participated in efforts to support favelas resisting eviction. Panelists included: Mendes and Cocco, who both organized the book and contributed essays; Maria Lucia de Pontes and Adriana Britto, who both contributed essays to the book and continue to work as public defenders; and Cleia Soeiro, Jorge Santos, and Fatima Amorin, from the communities who suffered evictions, Canal do Anil, Vila Recreio II, and Estradinha, respectively.

Panel participants each shared what NUTH’s work during the covered time period meant for them. Community leaders told stories of how they came to work with the Public Defenders Office, and what it meant to have their help.

Cleia Soeiro had resided in Canal do Anil in the West Zone for over 20 years when City officials arrived at her community in 2007 with orders for them to leave. The attempts to remove Canal do Anil were related to growth in Barra da Tijuca and the upcoming World Cup and, later, Olympics: “When the construction began, the idea of removing residents also began. Because people from abroad came, foreigners, and we were (seen as) visual pollution,” said Cleia.

When City officials wouldn’t let residents of Canal do Anil enter their own community, Cleia didn’t stop looking for a solution: “I didn’t have the knowledge, but if they wanted to do this, I was going to look for help. I went to the university and took the issue there.”

That’s how Cleia met Professor Miguel Baldez, who also participated in the panel and contributed essays to the book. He introduced her to the attorneys at NUTH, and Canal do Anil became the case that brought people together to begin to create the dynamic between NUTH and favela residents that was on display at the panel: a collaborative approach between attorneys and residents. Once NUTH got involved, the Canal do Anil Neighborhood Association held an assembly with the attorneys who, unlike the City, actually asked residents: “Do you want to leave your community, or do you want to resist removal?” Residents chose to resist, and while some ultimately negotiated with the City and left, Cleia’s community still exists today.

Maria Lucia de Pontes joined NUTH after Professor Baldez learned about Canal do Anil and invited her to join the unit. For Pontes, working with NUTH and resisting with communities changed the way she approached her role as an attorney. “We had two options: we could stay in our office or we could go to the community to resist together with them. Any lawyer you ask will say no, I’m going to stay in the office and write a petition. But not us. Baldez called me, at 6 or 7 in the morning and said, ‘Maria Lucia, they’re going to demolish the houses in Canal do Anil, we’re going there.’” Through her experience with NUTH and Professor Baldez, Pontes “relearn[ed] to work with the idea that rights are not given, they are constructed.”

City officials began efforts to remove Estradinha in the Tabajaras favela in the South Zone in 2010 after heavy rainfalls caused significant damage to a number of favelas. While there was little to no damage in Estradinha, the city still targeted it for removal on grounds that it was an area of risk.

Fatima Amorim, a community leader from Estradinha, thought she didn’t even have a legal right to housing before she met the attorneys from NUTH. “When I arrived at NUTH, I was very lost. I didn’t know what to do. I thought that I really had to leave my community, that I didn’t have a right to housing, that the City was stronger than me, and that they had the right to remove the community from its location.” 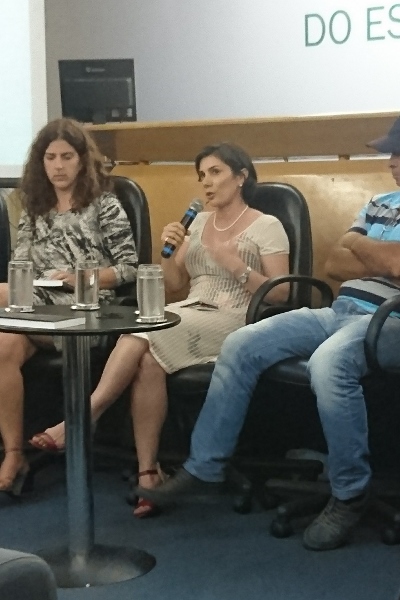 Amorim came to trust the NUTH attorneys when they came to the community and took the community’s position into account. She recounted that one day Pontes showed up at Fatima’s church, stood before community members, and asked them what they wanted, to stay in their community or to leave: “[Pontes] needed to know what the residents wanted; if they really wanted to stay or to leave. This was a position that really caught my attention, because it was important to know the community’s position… She needed to know whether we really wanted help. Because it’s very easy for a public defender, a politician, whoever, to come into the community, say this is the rule, and simply leave. But thankfully the public defenders at that time had a different vision.”

In 2011, when the State began to remove attorneys from NUTH, it was devastating for Amorim: “When you left NUTH, for me it was horrible.” At the time, she thought, “My God, what’s happening? I’m losing everyone.” In an effort to sustain morale, she hid what was happening from her community, “It was horrible. And I hid it from the community, because they had so much trust in this group I’d brought to our side; because it was public defenders defending the community. They had become the community’s friends. This was the difference—the difference between having an attorney, or an attorney friend.”

Thanks to the counsel of NUTH attorneys, Amorim’s community resisted removal: “Today my community isn’t completely removed. The City said we were inferior people who dirtied the land. The City managed to remove 255 homes, but 100 homes remained in the resistance, and we’re there until today.”

Jorge Santos from Vila Recreio II in the West Zone reiterated many of the same themes as other community leaders. Before meeting the NUTH attorneys, he didn’t know that he had a right to housing. “I thought how Fatima thought, that my rights were limited to going to work, coming home very tired, taking a shower, eating dinner, and going to sleep. The next day, getting up tired, me and my wife getting breakfast for our child, taking him to school, and doing it all again.”

Santos didn’t trust attorneys before working with NUTH. He had always heard that “[lawyers] only study that to earn money; they’re going to help those who have more money to pay.” But when NUTH arrived, Santos took the time to listen. When attorneys told him there was a case pending against Vila Recreio II, it was news to him. He was grateful for NUTH’s reliability: “Thankfully, Maria Lucia always came back at crucial moments.”

NUTH’s work from 2007 to 2011 gave both the attorneys and residents a new perspective and approach to resisting removal. Attorneys worked with the communities directly and established meaningful relationships, and residents learned their rights. As a result, “today we have this discussion [about the right to housing] in the form that it should be,” said Pontes. For her, in the fight for housing, “everyone has to be included. Not just the lawyer or public defenders, but especially the residents.” She summed up lessons learned by quoting Professor Baldez: “It’s much easier to be together than to be separate. If we have the chance to change something, it’s together.”