Members of the Sarapuí fishing community in the Baixada Fluminense in Greater Rio find themselves in precarious economic conditions as an eco-barrier strung across the Sarapuí River has been blocking them from reaching their fishing grounds since July. Rio’s state government installed 17 eco-barriers in rivers throughout the Baixada Fluminense as part of a promise to depollute 80% of the Guanabara Bay in time for the 2016 Olympic Games.

The barriers consist of plastic tubes attached to a steel wire intended to prevent floating trash from reaching the Bay. Unfortunately, fishing boats can’t pass over the eco-barriers’ floating plastic grid and the masses of gigóia marine plants that float up against them. Fishermen who dock their boats behind these barriers no longer know if they will be able to reach work or return home on any given day.

José Vitor do Nascimento Raimundo and Gilciney Lopes, who have sustained themselves fishing the Sarapuí River all their lives, find themselves forced to wait hours every morning for the tide to rise and the plants to float away, if they make it across at all. “How are we supposed to sustain ourselves if we can’t come and go? I support four children, how will I pay my bills?” asks Raimundo.

All this for eco-barriers that catch only 8.8% of the trash that floats into the bay, an effort journalist Emanuel Alencar says is “like drying ice” in his recently released book Baia de Guanabara: Descaso e Resistência (Guanabara Bay: Neglect and Resistance).

The Sarapuí River fishing community didn’t always have to travel to the Guanabara Bay to fish. Due to high levels of pollution, fishing populations have been devastated. Fishermen must row further to healthier waters near mangroves or Ilha do Governador. “The situation today is regrettable,” says Raimundo. “Crabs can’t survive here in the river anymore.”

Lopes says the Gas Verde S/A dealership has clandestinely continued to release liquid gas and slurry directly into the Sarapuí River despite a mandate from authorities not to do so. Other culprits polluting the river include the Bayer factory which directs its waste into the Sarapuí River, the Petroflex rubber factory in Duque de Caxias, the Gericinó landfill and the continued release of untreated slurry from Jardim Gramacho, an inactive landfill which was once the largest in Latin America. The Sarapuí River has earned the nickname “river of paint” due to the past release of dye from the Bangu fabric factory into its waters. In addition to industrial waste, 18,000 liters of untreated sewage flow into Rio’s watershed per second.

Raimundo and Lopes are tired of witnessing the environmental abuses which continue to devastate their ability to support themselves as artisanal fishermen. They are still fighting to receive indemnities after the Petrobras oil spill of 2000 from the Duque de Caxias oil refinery, which released 1.3 million liters of oil into Rio’s watershed. The Rio de Janeiro Federation of Fishermen (Feperj) won restitution for the 12,000 fishermen whose livelihoods were harmed by the spill, yet Petrobras has never paid the indemnities.

“They were abandoned by the State,” says Elza Maimone, the lawyer who has been assisting the fishermen in their continued fight for the Petrobras indemnities pro-bono. “Politicians use the fishermen when they want to win an election, then disappear.” One such false promise was the Sarapuí ETE, a R$37 million sewage treatment center inaugurated under Governor Garotinho in 2000 that has never entered into full operation due to a lack of collectors and nets, according to Alencar. 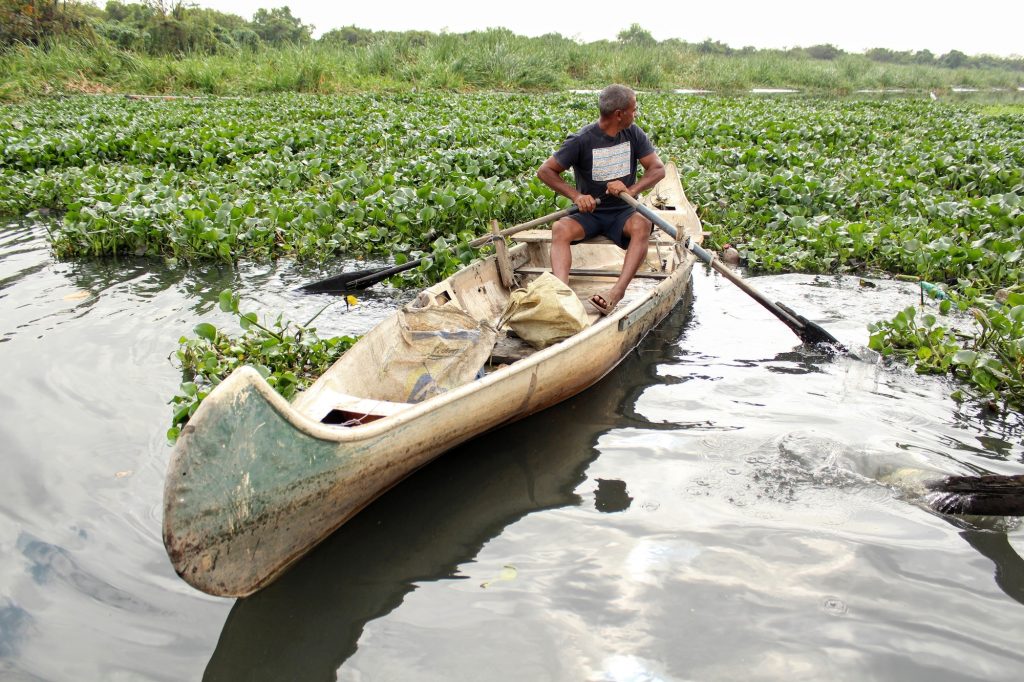 “What we have here is a job badly done on the part of the inspectors and the authorities. That they permitted work like this to be done in the Sarapuí River is not something you will see shown in the international and national news. They put on the Olympics trying to show the bright side of our country, forgetting that behind the pretty picture there is a community suffering for the sake of keeping up appearances.”

Lopes suggests a simple solution: moving the eco-barrier further up the river, where it would not block their path. “No one consulted the fishermen,” he says.

Watch our video on the Sarapuí fishermen’s situation: