CatComm recently surveyed some of the most active women community leaders in our network about womanhood and community leadership to get a sense of women’s voices and knowledge across Rio’s communities. This is the second article in the series. View video interview with Giordana Moreira here. 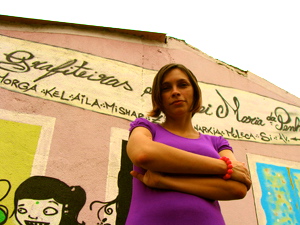 In 2005, journalist Giordana Moreira covered Brazil’s first National Meeting of Women Graffiti Artists. As it came to an end she had inadvertently solidified the weblike connections between her personal interests in politics, art and gender issues. She became interested in the particular situation of women graffiti artists.

Giordana realized that graffiti’s nature, being a street art like other elements of hip hop, made participation extremely difficult for women: “Having to carry a book bag full of spray paint in public, stop in the middle of the street without asking permission to graffiti… all this challenges the place society designates for women, which is a private space.”

Giordana notes that today graffiti is made accessible through workshops when a few years ago it could only be learned on the street from other artists: “Having so many men involved intimidated women and being just one woman among so many men made it all the more difficult to learn technique.” Giordana also admired the solidarity of women graffiti artists, some of them traditional feminists and others not interested in feminism at all, who put aside these differences to paint together. 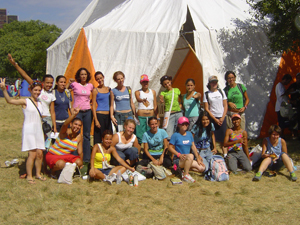 Giordana later incorporated this in her work with the NGO ComCausa, when coworkers became interested in concentrating efforts around the Maria da Penha law, which strengthens punishment for aggressors in incidents of domestic violence. From her efforts, Women Graffiti Artists for the Maria da Penha Law was born, which later became Artefeito, a group of graffiti artists whose work tackles gender issues and sexism. Giordana is also a founding member of Roque Pense, a group sponsoring workshops, fanzine, radio, and rock music initiatives born out of a partnership between Artefeito and Let’s Pense!, a poetry fanzine. “Pense”, literally “Think” is Artefeito’s abbreviation for “Para uma educação não sexista,” or “for a non-sexist education.” Giordana identifies the roots of her work in her teen involvement in alternative culture, particularly at the Nova Iguaçu Skating Rink, the oldest in Latin America. This early affinity for culture and art, paired with active involvement in political discussions, were part of natural professional developments that led to Giordana’s career in art and activism with a focus on gender issues. 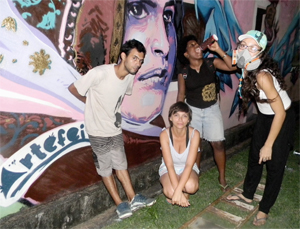 For organizations like Artefeito, which allows women and men participants, a common difficulty is that a lot of funding opportunities are designated for women-only organizations. Giordana claims that “space has got to be made for women to participate, while at the same time not excluding men from the process. At Roque Pense, even though we work towards female protagonism, we also work with rock in Rio’s northern suburban region…and we can’t exclude men from this. We have to get them together with us to share knowledge and power.” Even within mixed-gender organizations, however, Giordana advises that women be given the responsibility of suggesting and approving solutions, since, after all, they are the ones suffering discrimination. Having to remind male participants of this on occasion is necessary.

When asked what her philosophy is for gaining ground in women’s rights and participation, Giordana says, “From the moment a woman takes responsibility as the owner of creation, she will certainly share power with men.” Giordana cites musician Rita Lee, who challenged women beginning their music careers to always compose their own songs, and likewise, advises that women graffiti artists “have got to paint a lot, host their exhibitions and workshops themselves.”

A huge challenge, as Giordana puts it, is that “men are always the protagonists.” In rock, for example, “the majority of those on stage are men, and that means the band… and the technical team. It is extremely difficult for women to get on stage.” Giordana even recalls one of her events where the stage director was a woman, and none of the all-male crew members would respect her. “If you look at the production team, it’s all women. But when it’s time for a photo op, or the show, however, it’s all men.”

Giordana’s years of life and professional experience make her an invaluable source of knowledge on women’s issues and the difficulties for organizations working in this area. Giordana cites the “false idea that (the problem of women’s rights) has already been solved” and women artists who claim to “think (work with women’s rights issues) is great” but don’t want to participate themselves, as very challenging and common occurrences. Giordana explains, “Women artists end up forgetting values… what they want is to tag along with the men – they’re the ones with the power and the contacts, and they’re decades ahead of women.” 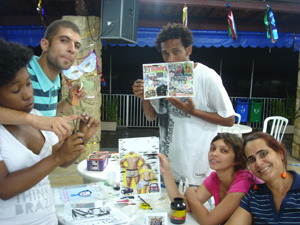 This male dominance in protagonism is why Giordana’s advice to women to be the sole producers of their own creations is so relevant. Once women make it on stage, however, there is still more work to be done: “It’s not enough just to create. You can be a woman in a rock band or an amazing graffiti artist, super famous, but it doesn’t help if you gain all this and don’t share a feminist message. You’ll just be another member in a market of men.”

Giordana remembers the first Let’s Pense fanzine workshop with a non-sexist education theme. 15 men attended, along with two facilitators: Giordana and a man. “I started by talking about the discrimination that happens in our every day yet no one notices. A man will go out to have a beer, but a woman feels bad leaving her child at home with a relative. A woman thinks, ‘ah, I have to wash these dishes,’ and if she doesn’t, ‘I’m not a good woman.’ If a man doesn’t wash the dishes, he couldn’t care less. He won’t feel any guilt.” Giordana was surprised at the positive responses she got from the young men. “Making people recognize discrimination is the most practical strategy,” she says.

And does the world lose out on anything when we don’t have women’s participation and artistic expression? “The world loses exactly what is most needed today, a real sense of humanity.” Giordana argues that, because of women’s role in society, conditioned to think more about family and be more perceptive of and sensitive to other family members’ emotions, women have sharpened these skills, much more so than men. “That’s what’s lost, especially in art, something that stirs up emotions. Without women’s participation, this humanity, solidarity and organization are lost. It’s wrong to make women responsible for the psychological well being of families, but this makes women develop this skill, much more so than men.” 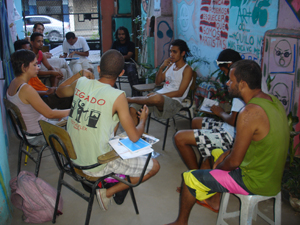 Particularly with young people, however, one must help “youth do what they want to do. It doesn’t help at all for you to put a flag in the young person’s hand and tell her to march in defense of such and such law. If this law doesn’t seem relevant to her, she won’t go.” Giordana advises incorporating these and other social issues into activities that youth already like. “It’s a lot better to host a festival of feminine rock than to hold a meeting that people will abandon later.”

This resonates with Giordana’s own experience, observing wisdom within seemingly irresponsible circles: “None of my singing and dancing friends had any ideas about activism, but actually, this group of people knew a lot more about responsibility to one’s fellow human beings than a lot of people who called themselves activists.”

Watch this video to hear more about Giordana’s personal experience with art and activism.