This is the third article in a four-part series on the social constructions of favelas and the potential of favela tourism to break down negative stereotypes.

Sociologist Anthony Giddens argues that, due to globalization, social relations around the world are intensifying as local events and identities are affected by events and ideas from across the globe. Favela tourism provides a clear example of how, should this access to local events and ideas be controlled by the communities that have a stake in the matter, this process can be beneficial. Community-run tours can be powerful weapons in addressing negative images about favelas–often fed through film and news media as described earlier in this series–which have historically shaped ideas about these Rio communities across international borders.

As of 2013 the city’s favelas drew nearly 42,000 visitors per year. According to Zezinho, owner of the community-based tour agency Favela Adventures, foreigners’ interest in favelas increased after the release of the films City of God and Elite Squad, both featured in the previous articles of this series.

By locals, for locals

One of the most important factors affecting whether a tour is responsible and sustainable is the information provided by tour guides. When a tour guide is well-informed about the history of favelas, features of daily life, and political issues, and able to share his or her own personal experiences, these tours can counter the dehumanizing effect of some films: they can (re)humanize favelas by contextualizing them within the societal issues that have influenced them.

Tours should not romanticize or exoticize the image of favelas by only highlighting positive, cultural aspects, and at the same time should not sensationalize favelas by only highlighting the negative—usually crime-related—issues. Community-based tours naturally find a healthy balance between showing positive and negative sides because as they live in the community, guides understand their nuances, strengths and weaknesses, and share these with interested visitors. They are more likely to be aware of the community’s history, societal issues influencing it, community solutions, infrastructure, social services, culture, social relationships, relations with Pacifying Police Units (UPPs), and the effects of social exclusion.

As a response to negative reactions to non-community-based favela tour companies, councilman Célio Luparelli proposed Bill No. 1599/2015 to regulate tourism, stimulating community-based tourism under specific regulations. Although the law was approved by the Justice and Drafting Commission and the Commission of Urban Issues in 2016, it still needs to pass through other commissions.

Many favela tour guides support the bill but, as Viva Favela previously reported, some like Santa Marta guide Thiago Firmino have raised concerns that its actual implementation could create new fees and certification requirements, which would advantage outside initiatives over community ones.

To understand why walking is important, it is useful to study some of the arguments against tours done in cars, vans or ‘safari jeeps.’ Residents of Rocinha, Caio, Maria and Julio,* all reported negative opinions about driven tours, especially the tours in ‘safari jeeps,’ which have also resulted in community protests, official and unofficial, in recent years. Ironically, the company Jeep Tours attempted to promote itself in an Al Jazeera article on the ethics of favela tours. The article states that “in the beginning, the company was concerned about how tours would be received by favela residents, but that hasn’t been a problem,” according to the company’s owner. The owner explains: “Today our tours through favelas are a part of the local communities who totally recognize and approve of what we do.”

Despite locals’ dislike of driving tours, when government tourism institutions Riotur and Embratur were asked about favela tour companies, they only offered jeep tours as options. This illustrates a disconnect between government institutions and local residents in spite of resistance from communities and even widely seen satirical critiques of jeep tours by Brazilian comedy troupe Porta dos Fundos.

As opposed to the jeep tours, community initiatives work with local tour guides who guide groups through their own community by foot, occasionally also using community transport options (i.e. kombis and moto-taxis). Although tours only last a few hours, by walking tourists gain a better understanding of residents’ daily routines as well as the opportunities such as for interaction, and difficulties arising from narrow streets, alleys and stairs. Tour guides explain specific facilities or issues—such as sewerage, local businesses, architecture—in detail when they walk by relevant sites.

Walking tours also provide tourists with a chance to absorb the ambience and pose questions about things they notice en route which would not otherwise occur to them. Driving on main roads takes less time and is tremendously superficial given that favelas are primarily pedestrian-oriented communities. On top of that, walking through a favela avoids the symbolic hierarchy that comes with tourists sitting behind a barrier in a jeep 1.5 meters above locals.

Benefits for the community

The most beneficial tours are those that also reinvest some of their profits in community-based social projects or businesses.

Favela Adventures in Rocinha invests part of its tourism income in its own social project: a DJ school. Every semester 12 students learn the tricks of DJ-ing, with some eventually earning money through gigs. Tourists and other supporters are encouraged to donate specific items needed by the school via its “pack for a purpose” initiative.

Ágatha, a local tour operator in Cantagalo, also invests in community initiatives such as a museum that functions as a community center, the local graffiti artist Acne’s projects with children in Pavão-Pavãozinho, and a garden, Jardim do Céu, which serves as a lookout point during her tour.

She explains her motivations behind the reinvestments: “That’s the thing about favela communities, you need each other… This is how we grow up and are taught and I wanted to pursue this in my business. It’s too easy to earn money and not share it. But I’ll always depend on someone in the favela. What comes around, goes around.”

Other community-based tours, particularly a growing number of tours by community organizers, focus explicitly on debunking stereotypes and growing a network of people outside their communities who view favelas with more precision and can be mobilized to act in their support. These include Cosme Felippsen in Providência and André Constantine in Babilônia, among others.

Although not all community-based tours support social projects or focus on debunking myths, they all by definition employ locals as guides and commonly support micro businesses on the tours themselves. Tours may include lunch at a local restaurant, beverages and snacks from a store en route, viewpoints on residents’ rooftops in return for R$1, or visits to local souvenir shops. 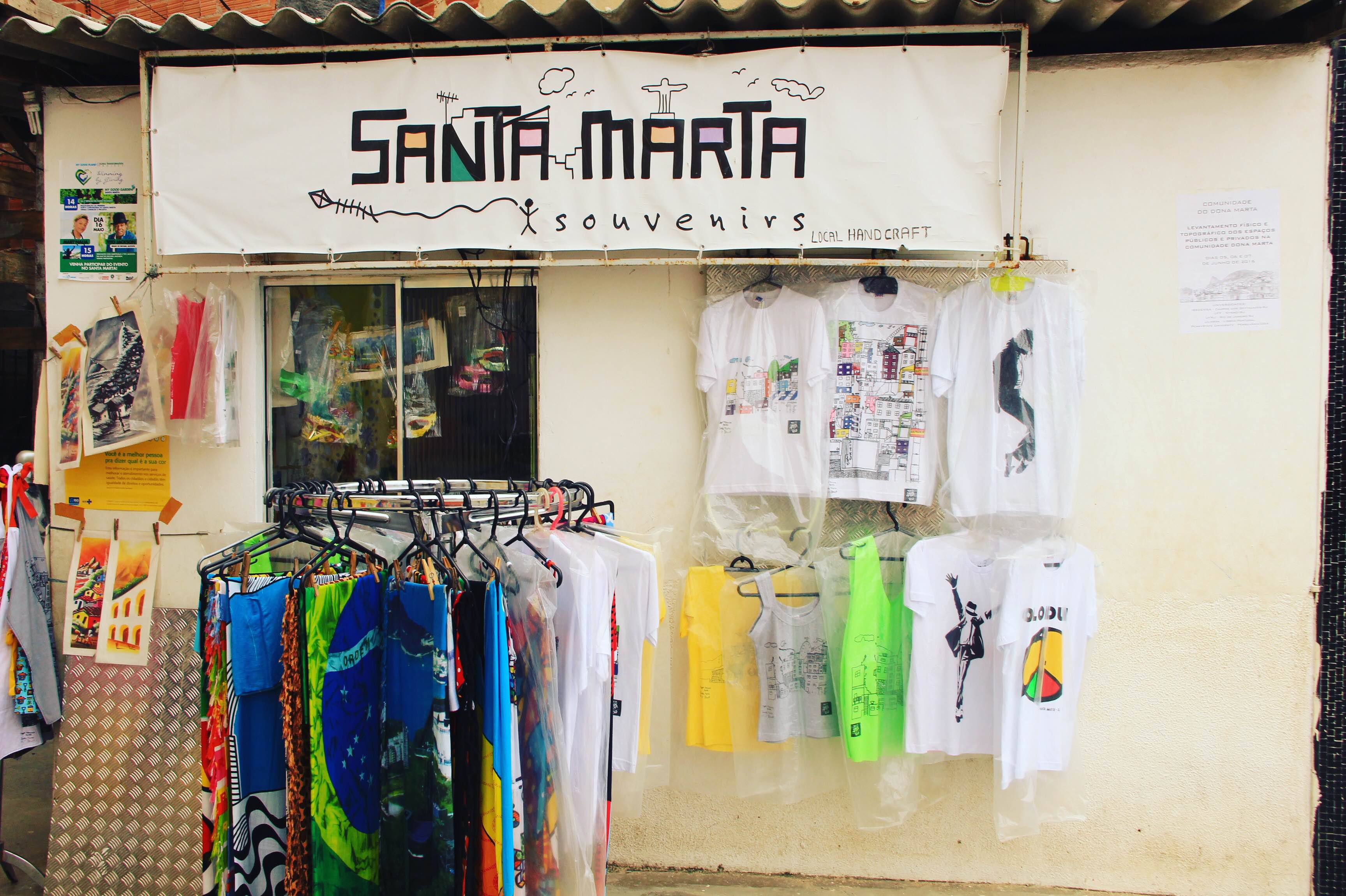 Local tour guides seek to debunk stereotypes by providing perspective, knowledge and inside information about their community.

Sociologist Zygmunt Bauman highlights the importance of mobility in today’s era of ‘liquid modernity:’ those who overcome time and space benefit from globalization and those who are excluded do not. Community-based tours can be seen as a form of mobility to overcome a specific dominant time-space compression of global images about favelas. Tour agencies run by locals and primarily working with local guides empower themselves by showing the real thing, which is an image of favelas that differs from what is regularly shown by the government and media.

As sources of more everyday life images and lived experience that work to disprove the dominant narrative, community-based tours can also be seen as nondramatic everyday resistance that is integrated in tour guides’ normal lives (as jobs). At the same time, favela residents include themselves in what they see as the opportunities provided by global tourism. 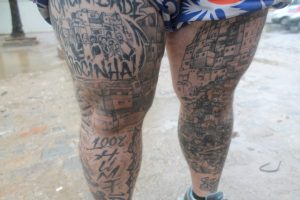 Zezinho started Favela Adventures in 2007 when a resident asked him to do tours because, with his body completely covered in Rocinha-themed tattoos, they thought he would be a great advertisement for the community. He recalls that initially he refused but changed his mind for two reasons. First, when he told people outside the favela that he was from Rocinha, he says they would “look at me with this dirty face: ugh, really? Ew.” Secondly, he says the seven major tour companies that operated back then in Rocinha were from outside the favela, taking the money with them and providing false or inaccurate information. “I wanted to do something that was more sustainable. I overheard this guy once saying: ‘look! Bullet holes!’ Okay, maybe they are, maybe they are not, but why point it out like that? [Just because] it makes the tour more exciting and live up to the stereotypes.”

For Zezinho it is not about earning money: “I’m 53 years old, I have a rented apartment, no Nikes, car or gold chains. It’s about providing jobs, increasing self-esteem and showing outsiders from a local perspective what life is about here.” He gives “I ♥ ROCINHA” bracelets to residents as he tries to increase their pride in where they come from.

For Erik Martins of Rocinha by Rocinha, tours are a form of resistance because “we are talking about identity, empowerment. We were always survivors and we will always survive. The world looks at us [Brazilians in general] as if we are a joke with all the issues surrounding the Olympic Games, but it’s important to keep our identity and it’s important to focus on the positive things. We need to increase our self-esteem, which is very low, by being proud of where we come from, which can be done through tourism!”

Ágatha explains: “It’s about showing my life. I’m glad to show that people here are good. I want to show tourists we are not violent because we are poor—we’re hardworking families who survive.”

Cantagalo resident Laís does not think the tours are intrusive: “I don’t mind people walking around and looking into my window. When they come I like them to see my life. This is something the media doesn’t show, so it’s nice that people come and take a look themselves.”

Many locals find the tours positive due to the development of counter-stigmas. As Rocinha resident Luciano explains, the tours are “valuable for the community, creating awareness and visibility for the community. The tours show other things than the movies, and because people are receptive here, the majority doesn’t mind.”

Business owner and Babilônia resident Diogo points to financial benefits: “The tours are good, they bring people from outside in and that brings capital to the favela. If the community really didn’t approve of the tours, they wouldn’t happen!” His only concern refers to outside tour agencies: “I’d prefer local tour guides. It’s fairer because we fought for our community.”

The specific tour operators central in this article seek to humanize favelas by constructing a collective reality through their narratives. Community-based tours can be seen as sustainable due to their content and organizational structures. These tours counteract media-induced perceptions of panic and violence, portraying the reality of the favelas as working class neighborhoods with successful businesses and amenities.

The local tour operators and guides react to the globalization of favelas through film and media broadly speaking. The content of their tours can be seen as everyday resistance countering dominant perceptions of their communities. Through a nuanced experience presenting ‘both sides of the coin’–both the qualities and challenges these communities face–community-led tours provide a more accurate understanding of local and national processes regarding favelas. And although this article looks at just a handful of community-led tours, they can be broadly perceived as important contributing actors in breaking down the negative stereotypes about favelas, raising global awareness and increasing self-esteem of locals.

This is the third article in a four-part series on the social construction of favelas and the potential of favela tourism to break down negative stereotypes.

Phie van Rompu, M.A., graduated in Global Criminology at Utrecht University in the Netherlands. She researches state-organized crime, (de)criminalization, resistance and drug-related issues. This RioOnWatch series is based on her Masters research.

*Some names have been changed.

Full Series: Social Constructions of the Favela through Films and Tourism