Those who passed through Vila do Pinheiro on Friday night probably saw an independent rock show organized by the ‘Local Actions’ program of the Rock in Movement Festival (Rock em Movimento, or REM). The free event taking place in the Maré favela complex in Rio de Janeiro’s North Zone closes the street off with a makeshift stage in front of the Tabacaria Dreadlocks shop and provides all musical equipment for the three independent bands that’ll stir up the night playing their original songs.

To further democratize the underground scene, there’s an open mic for manifestos, producers and local artists to share their work, and between one show and another, the DJ plays the classics. The last show of the 6th edition of the Festival will be this Friday May 5 at 8pm, with the performance of bands Banda Verbara, Valette Vulgar and Allira.

The Rock in Movement collective is made up of musicians from the bands ALGOZ and LEVANTE, who also coordinate its activities: Klaus Grunwald, Elza La Sombra, Diogo Nascimento and Reginaldo Costa; and also collaborators Rodrigo Cerqueira (Mariola); Flavio Nogueira (Dj Capacete) and AF Rodrigues.

The movement emerged in 2009, from the success of the “Maré de Rock” event and the need to expand the movement, mobilizing musicians to occupy public spaces with concerts, politics and other forms of culture. From its beginning to today, the collective also impresses by its numbers: over 200 original bands have already performed inside and outside Maré. In the Local Actions edition, the Festival brought together 15 bands from different parts of Rio de Janeiro.

Design student Marcos Vinicius, 23, has been a regular at Tabacaria for more than a year and believes in music as a mobilizing element: “Rock em Movimento opens up space for local bands to be seen. I also work with art and, it must be very rewarding, not only for the public but also for those who organize it. The Brazilian artists should be more recognized and the recognition that I speak of is the kind that comes from the people”.

At least once a month he is there with his group of friends, but he doesn’t ignore how musical diversity is present throughout Maré. “Other genres are found around here, like rap at Pontilhão, forró in Parque União and funk at Quadra da Paty. I think every event is important because it helps in the development of cultures,” affirms Marcos.

Those who have been attending for years will notice how the event has gotten more organized. And there is a reason: Rio de Janeiro’s Culture Secretariat recognized Rock em Movimento for its contributions to local culture through the Local Actions Prize in 2015. The award was an opportunity for the collective to expand the Festival with several editions, ensuring structure and technical quality, audio and video recording and financial help, a way to show appreciation to those who have always volunteered. 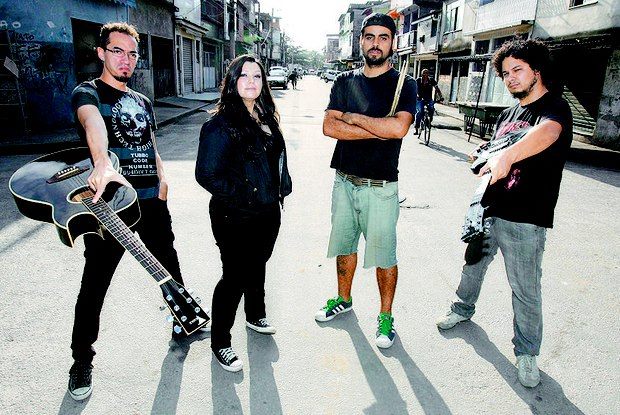 A musician and one of the coordinators of Rock in Movement, Reginaldo Costa, 35, sees how the project expanded after the award: “We managed to have stability and greater technical quality, something that in general in the underground scene is difficult to have. And understanding the difficulty of the rock scene in Brazil, we were mainly concerned with ensuring the quality of the event. And this feedback is based on our activist friends who help us, being an essential part of the operation of the Festival, as well as the local commerce, in addition to the partnerships we have made with the NGO Redes and Lona da Maré.” Prior to the award, the group used their own equipment.

With the prospect of further expanding the movement, the Festival has already taken place at the Federal Fluminense University (UFF) and the Caxias Library. “These local partnerships are fundamental, this is what creates a network with people and commerce. The shows always get very crowded for two reasons: the very strong rock audience and the limited space. The crowd strengthens the Festival, everyone mobilizes in some way for the event to fill up, calling neighbors, friends and acquaintances. The event has legitimacy because it is done, mostly, by residents. We do not get visibility from outside, but the attention from residents makes a big difference on the cultural scene,” says Reginaldo.

Beyond producing concerts, the objective is to study the current scene: what are the difficulties, incentives and demands, using the lived experience of the participating bands. They are also producing a mini-documentary telling the trajectory of the collective and their experience with the award. And to facilitate access to high-cost sound equipment, they conducted six sound-training workshops that trained 10 residents.

Regardless of sponsorship, they intend to continue with local shows and partnerships, such as Tabacaria Dreadlocks, which offers roof cover, electricity and a bar, the restaurant Combo Louco and the Laricas Bar; and to always occupy other spaces with performances throughout the city streets and public universities.