From March 9 to 14, Studio-X Rio hosted x-Week as part of the celebrations of its six-year anniversary. Organized in partnership with the Columbia Global Centers, which celebrates its four-year anniversary, the Museum of Tomorrow and the City of Rio de Janeiro, Studio-X’s events focused on the topics of water and housing. Specialists from Brazil and abroad participated in debates, exhibitions, roundtable discussions and a guided visit.

X-Week 2017 kicked off on Thursday with presentations and a debate on alternative sustainable technology for wastewater treatment, with the participation of national and international urban planners, architects and engineers.

Sewage and wastewater is a major problem in the state of Rio with only 65% of it being collected and around 34% treated, leading to a variety of health issues, environmental pollution and flooding. Further, investing in sanitation structure is economically efficient as every R$1 invested results in R$4 saved in the health sector.

Ooze Architects–a Rotterdam-based duo including Eva Pfannes and Sylvain Hartenberg–presented their “Água Carioca” constructed wetland project. Rio’s abundant nature, as Pfannes explained, makes it an ideal place to clean sewage through plants. She challenged the common idea of sewage needing to be hidden and underground, arguing that “it should be close to us so we understand how it works.”

Imitating the human body and its cleaning cycle, constructed wetlands use natural microorganisms to treat the water and in this way completely forgo the use of chemicals. Pfannes explained that the strength of small-scale projects is their focus on the local, thus adapting better to context than larger-scale projects do.

Isaac Volschan Junior, a civil engineer, sanitation specialist and professor at the Faculty of Water Resources and Environment at the Federal University of Rio de Janeiro (UFRJ) added that even though some large-scale modern technologies are sustainable, they might not always be applicable. He thus reinforced Pfannes’ message of using local decentralized infrastructure, which was a common thread of the discussions.

Referring to the event’s title–Basic Sanitation: New Technologies, Applicability and Urban Planning–Volschan Junior questioned the use of “new” alternative infrastructure in the context of Rio which, as he argued, was still lacking “old” basic sanitation infrastructure. He argued that Brazil already has a hard time implementing the most basic sanitation for a large part of its population, so thinking about alternative technologies is unrealistic. He also explained that for a technology to work in a certain context, it needs to have a strong regularization system, and consider economic sustainability, efficacy and “robustness” of maintenance and operation.

Recounting his first visit to a favela in Rio, Kartik Chandran, an environmental engineer at the Columbia School of Engineering and Applied Science, stressed how communities find their own solutions around water supply, making this an opportunity that should not be ignored. Rarely discussed, much infrastructure involves a high green gas footprint on the environment and local systems can be a less expensive and more suitable alternative. At Columbia University, Chandran and his students research the potential of sewage to be transformed into other resources, such as food and heat. This way, greenhouse gas footprints are substantially reduced and other resources can be obtained.

During the discussion that followed, decentralization promoting sustainable projects in communities was perceived as a promising start to developing more sustainable and feasible infrastructure. The assumption previously made by Volschan Junior, of needing to install basic sanitation before upgrading to newer and more sustainable technologies, was challenged by José Luis Vallejo, professor at Columbia’s Graduate School of Architecture, Planning and Preservation and founding member of ecosistema urbano, a Madrid-based group of architects and urban designers operating within the field of urbanism. He asked, “Why should we use old technologies if we know new and more efficient ones?”

Alternative projects such as OOZE’s Água Carioca can build on the motivation and organization found in many local communities, such as Morro da Formiga, where the informality of the community can be an opportunity. In contrast to more formal areas of a city, favela residents identify much more with their community and participate more often in the implementation of local projects. Further, since septic tanks and water harvesting are separate for each house, the families become responsible for maintaining the system, ensuring their knowledge of the process. In favelas that are as well organized as Formiga, for example, a project like Água Carioca can be sustainable over the years.

On Saturday, participants could get a better idea of constructed wetlands during a guided visit of the Água Carioca prototype at the Burle-Marx house, a Brazilian cultural heritage site with over 3500 different plant species. Launched as part of an extensive study on the use of wetlands to filter wastewater, the prototype uses some of those plants. 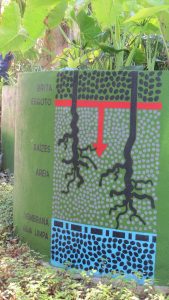 Contrary to what its name might imply, the constructed wetlands do not involve standing water on the surface, thus preventing any problems with mosquitos or smell. Further, if implemented in a local favela, this system provides more public space and could help lower population density.

Reflecting an underlying theme of several of its events, x-Week also featured a roundtable discussion on bottom-up initiatives. These projects view citizens’ active participation as fundamental to strengthen communities for more sustainable approaches.

In addition to an exhibition and debate on what constitutes good public housing, x-Week 2017 concluded with the opening of the exhibition “Hybrid residential infrastructures.” This was followed by a roundtable discussion on the challenge of housing with architects from MMBB, H+F, Vigliecca & Associados and Cité Arquitetura.