José Martins de Oliveira, a long-time activist and organizer in Rocinha, and currently co-director of Rocinha Without Borders, marked exactly fifty years since he first came to Rio de Janeiro on March 18 of this year. Born in the state of Ceará in the Northeast of Brazil in 1946, Martins left home for the state capital of Fortaleza as a young man in 1967. On arriving, though, he sent his parents a letter telling them he was going on to Rio, and that he would be home in September. “The truth is that at the time I really thought I would come back,” Martins said, “but once I arrived things worked out in a way that I’m still here.”

RioOnWatch: What was the favela, Rocinha, like when you first arrived?

Martins: There were many fewer people than today–maybe forty percent of the current population. There also weren’t any water troughs in any of the houses. All of the water came from common taps, which was something very different for me. This was the Rocinha of houses stacked up the hill, of wooden barracos.

My first shock came when a woman offered me a cruzeiro to carry some water in two big cans to her house. At the time, I refused, and I was angry with her–my parents were small farmers, we were used to paying people to work for us, what did she mean offering me a single cruzeiro to do work for her? But then that night, as I was sleeping on the floor—there was no bed or anything to sleep on—I thought, ‘I’m not at home anymore, and tomorrow I’ll go and find that woman and agree to carry water for her.’ So the next day, I went to her house and spoke to her, then I carried a lot of water.

RioOnWatch: Where did you live at this time?

Martins: Up near the top of the favela. I had a friend who lived in Tijuca who brought me to Rocinha when I arrived in Rio and introduced me to someone else, who let me stay in his house. I didn’t pay rent, but I worked and we divided the space between us.

RioOnWatch: How long have you been active in the community, and how did you first become involved?

Martins: I began in 1974, so it’s been about forty-three years. It was to do with water, with the installation of a water system in the lower part of Rocinha. Just like when I arrived in the city, I thought the whole thing would be resolved in three or four months, but in reality it took over two years. 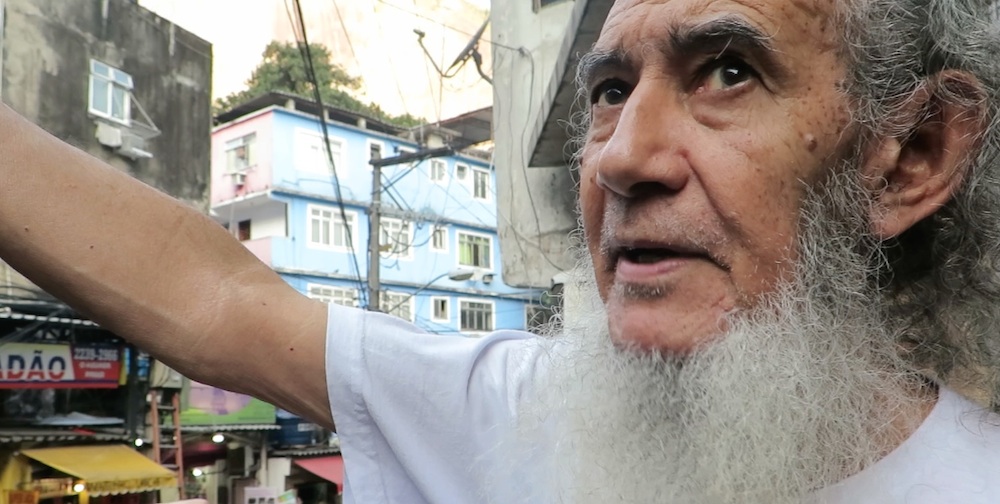 RioOnWatch: What were conditions like for community organizers in those first years?

Martins: In a lot of ways, finding a solution was easier than it is today. In those days, the fight for water gave us a concrete goal. Today people participate less, they don’t show up to meetings as often. Meeting just to meet or to discuss things is very hard. Back then, we had some support from the Catholic Church, which emphasized reflection, and got people to participate together.

Most of all, in the early days there was more need among all the residents, because no one had water. It isn’t like that now, that total lack. With the question of sewerage and waste, which is one that’s very important today, people are most focused on their own homes. You can walk into a house, in an area with open sewage all around, but the house itself is clean, so the people living there will say, ‘the trash isn’t our problem, leave it for others.’ This sense of individualism is growing all the time, and it’s thanks to more money and a higher standard of living.

RioOnWatch: What are some other campaigns and organizations that you’ve participated in? Are there any that have been especially important to you?

Martins: I’ve participated in [many] campaigns for better sanitation, for the original footbridge, in movements for the integration of other communities, meetings to discuss broader issues. The fight for water was my way into all of this, and it’s still a big issue today. I was one of the founders of the residents’ association in [the area of Rocinha known as] Bairro Barcellos in 1982, and I served two terms as president. I also participated in something important, which was the administrative region of Rocinha. The City divides Rio into thirty-four administrative regions, and I was the first regional administrator here, so I was the person at the forefront of directing whatever was the matter at hand. That wasn’t a community initiative, but a City position [meant to offer support] for the community.

In my forty-three years working in the community, the most important fight for me was that first water installation in the lower part of Rocinha, partially because it got me into the fight without knowing what would happen, but also because I always say that the only fight that matters is the one that will benefit the most people. Today, there are about ten thousand people using that water. The campaign for the footbridge was also important, but it was a smaller fight. [Years later, for the Olympics] the State spent R$14 million demolishing the old one and building a new one, but it didn’t change anything substantial for us. Sure, it’s better-looking now, but the level of access we have is the same. Covering open sewers, though, was a very big project, because before that when it used to rain a lot of houses would get flooded out, and now it’s much less of a problem. And another important fight was the one to get electric lights installed in the community. The Catholic Church was involved in that one too, through the Pastoral das Favelas program.

RioOnWatch: What has the relationship between residents in the favela and people who come here from outside to organize been like?

Martins: Communication and sharing knowledge is incredibly important. But you also have to be careful and remember that the people coming from outside don’t know the reality here first-hand, and they can make some big mistakes or cause offense. The only way for them to learn is to listen to residents’ experiences.

It’s important for people from outside to bring their technical knowledge, but it’s also crucial that they respect the way of life here and the local knowledge that residents have. There was one group from outside, for example, that was frankly a disaster for our community. The woman in charge created a new residents’ association that got into conflict with another one. On the one hand, it is good that residents were talking and discussing with each other, but she was really destroying all of the new [community] organizations that were being created–she wanted to control everything that was happening, and she wasn’t letting residents have a voice as a result. After that there was another group, a sewing group, that was also created by people from outside and that wasn’t giving any voice to the participants, and that group also ended up not achieving anything. It’s important to have that respect–otherwise, you get nowhere.

RioOnWatch: With your years of experience here in Rocinha, do you have some vision or ideal for the community and for organizations like yours, Rocinha Without Borders, going forward?

Martins: I really believe in people’s ability to get involved in the movement and transform their society. What changes exactly will depend on the direction that the movement takes–the people involved have control over that direction. I believe in this participation, and I believe that when people get to know their rights and duties, then they’re set to achieve that transformation of society.

The great challenge right now is to get young people involved, and to keep them coming back. We’ve been trying, using the Internet and other things like that, but as of right now young people don’t have a great deal of interest in the movement.

As far as organizations go, there are a lot already in Rocinha, and it’s entirely possible that more will be created. What’s important now is that those organizations have a vision of unification. If they join forces, they’ll have that much more power.