In 1996, Merced Guimarães and her husband Petrucio made a chilling discovery in their new home during an extensive renovation project: workers excavating in the soil beneath their house in the neighborhood of Gamboa in Rio de Janeiro’s Port Region unearthed human bones. After calling the authorities, leading to an investigation of the site, it was discovered that this crime scene was in fact the site of a mass grave, the until-then rumored Cemetery for New Blacks. It was here that tens of thousands of captured Africans were buried from around 1791 to 1831. With bodies weakened during travel across the Middle Passage, they died shortly after arriving to Brazil’s shores and prior to sale, and were discarded into large pits, their remains periodically crushed and burned along with trash. 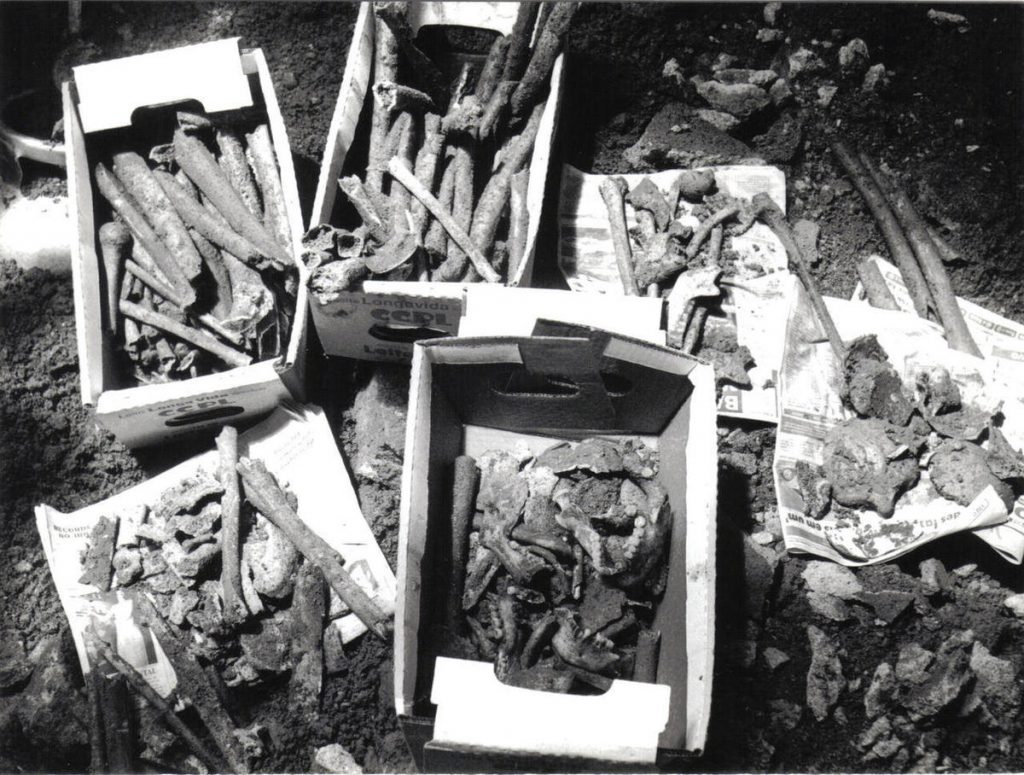 This unexpected exhumation of a horrific past marked the starting point of Merced’s life work. After an initial archaeological survey, the city government was prepared to cover the cemetery once again. Merced could have very well proceeded with her renovation plans and all would have been forgotten once more. Instead, she decided it was her duty to dedicate this space to the memory of the tens of thousands of lives buried there and to the history of slavery in the Port Region of Rio. After a nearly ten-year battle, she was able to inaugurate the New Blacks Institute (IPN) on May 13, 2005. The Institute serves as a museum, memorial and research center exploring the history of the cemetery and the Port Region, and celebrates Rio’s black heritage. It is a nonprofit organization, and depends largely on the support of individual small donors. It is the only stop on Rio’s Black Heritage Circuit where detailed historical information is exchanged and people are regularly available to answer questions and deepen the visitor’s understanding of the tragic and dramatic history of the world’s largest slave port.

This month the Institute has been running the campaign #IPNResiste (#IPNResists), a challenge to local government to resume providing the basic funding which allows IPN to keep its doors open to the public and carry on with its research and educational programming. In 2013 the IPN began receiving some financial support from the Urban Development Company of the Port Region (CDURP) and the New Port Concessionary during implementation of the City’s Porto Maravilha port redevelopment plan. The budget was cut halfway through 2016, however, and there is no promise that the City will resume its support. As Merced writes in a letter announcing the campaign: “We cannot close this Institute that for 12 years has been trying to implement actions to preserve, research and dynamize the African and Afro-Brazilian cultural heritage in a diasporic perspective, aiming at the validation of human dignity, universality of knowledge, racial and religious equality and the building in the present of memories buried in the past.” As it stands now IPN is struggling to even afford basic cleaning supplies and utility bills. If the city government fails to respond by the end of the month, IPN will have no choice but to close its doors.

Merced and supporters of the Institute are adamant that the issue is not one of lack of government resources, particularly given the minimum requirement to stay open being only R$6,000 monthly (US$2000). Certainly the country has been hard hit by its most recent economic recession, and the Rio City government is still reeling from the post-Olympic fiscal crisis. However, the costs of port zone projects like the Museum of Tomorrow (R$250 million), the Rio Art Museum or MAR (R$185 million), the VLT light rail project (R$1.2 billion), the new aquarium (R$100 million), and Olympic Boulevard, demonstrate that where there is political will and corporate interest, plenty of money and resources will be put to use. Professor Carlos Eugênio is a longtime supporter of IPN. In his testimonial featured below, one of many for the #IPNResiste campaign, he proclaims, “[financing] is an obligation of the state. The state has the resources, and the IPN barely costs anything. It is scandalous to say that there are no resources available.”

Studies estimate that between 20,000 and 30,000 bodies were buried at the New Blacks Cemetery. It is the largest known cemetery of captured and enslaved Africans in the Americas. Moreover, the cemetery is only one of numerous historical markers in the Port Region of Rio that reveal the area’s role as the world’s largest slave port. Of the five million captured Africans forced onto Brazilian shores, 2 million arrived in Rio de Janeiro alone, nearly four times the total amount to reach the United States. Sadakne Baroudi is a North American historian based in Rio de Janeiro. Her extensive research of the history of chattel slavery in Rio de Janeiro and throughout Brazil is published on her website AfroRioWalkingTour. She has been a long-time supporter of the IPN and her tours of the Port Zone bring visitors to the Institute every year: “’this [funding] is an obligation of the government. Operational costs of the IPN are the tiniest of obligations we have for what happened in this city. It was the largest slave port… Does Auschwitz have a GoFundMe Page?”

What the #IPNResiste campaign reveals, therefore, is a larger history and context at play that extends far beyond a question of lack of government resources. Though the port project involved the development of an African Heritage Circuit and purports itself to be a revitalization of the cradle of samba and Afro-Brazilian tradition, the reality is that it resulted in evictions and forced removals of long-standing black communities, as well as a police occupation of nearby Providência, Brazil’s first ever favela born within ten years of abolition and turning 120 this year. The primary light rail line of use to tourists, connecting the Olympic Boulevard to the city center was completed on time for the Games. In contrast, lines passing through poorer areas of Gamboa are still far from completion months after the Games have ended. Abandoned construction sites have harmed local businesses, and proved to be one of several economic pressures pushing black residents out of Rio’s “Little Africa”. The light rail lines now pass through the narrow street where IPN is situated, and are only a few yards away from a glass casing on the floor of the museum that reveals the bones of the cemetery. As in the past, the irony today is that the construction of Rio depends both on black labor as well as the displacement and erasure of black people. “Where do black people get to work and live in Rio de Janeiro?” Sadakne asks.

The circumstances that demand a campaign like #IPNResiste beg numerous questions: who are the intended beneficiaries of so-called urban renewal? On whose labor and removal does urban renewal depend? Is urban renewal inherently anti-black? “The government always comes from the outside with some kind of ‘gift.’ This is a really big problem about how public monies are allocated in communities. I don’t suppose the people of Providência would say ‘oh give us a cable car.’ I think they might want (better) water, sewerage, waste removal: the communities are never truly involved in prioritizing these budgets, in deciding how these monies get spent, or how these projects get built,” explains Sadakne.

These are the forces that IPN is up against, and the situation is appearing to be all the more precarious under the new mayoral administration of Marcelo Crivella, an evangelical bishop. Violence and police operations in favela communities are on the rise. Meanwhile, there are continued large-scale corporate development projects in the Gamboa neighborhood. One of Brazil’s major telephone companies TIM has purchased a property across the street from IPN. Just a few doors down are construction plans for condominiums and shopping centers. “I don’t want to be pessimistic, but I am not very hopeful that this [new] administration will deliver,” laments Merced. So far this year one meeting with government officials was canceled an hour before it was scheduled to take place, and at a second meeting no members of the government showed up.

In all, over 10 million captured and enslaved Africans were brought to the New World alive during the Transatlantic slave trade. It remains one of the most horrifying chapters in human history. And yet the world remains largely devoid of museums and memorials dedicated to its memory. Caribbean countries have made numerous attempts to demand reparations from Europe, so far to no avail. That being said the world is not want of successful models of how to grapple with an unspeakable past: most German students visit at least two concentration camps before graduating from high school. Memorials within and outside Europe compel visitors to revisit the atrocities of the Holocaust. Why then is there such a violent resistance to the remembrance of slavery? “One of the common myths about slavery and race and racism is that racism is what caused slavery. And that is not true. Racism is constructed, it’s invented after the Transatlantic slave trade is already institutionalized… When we look back at history and we ask what do we do with this now–we have to deal squarely, face on and bravely with the problem and the question of racism,” asserts Sadakne.

The following video, prepared for the Brazilian Pavilion of the 2016 Architecture Biennale, features a carefully compiled overview of Rio’s African Heritage Circuit and its importance (IPN is featured at 4:15):

Despite the challenging road ahead for IPN and Rio’s Port Zone, recent developments in the uncovering and preservation of its brutal past such as the Cais do Valongo are unprecedented. Had it not been for the organizing and resistance of the local community, these spaces would have already disappeared from view. #IPNResiste is yet another chapter in this difficult but indispensable journey. Please support in any way you can and publish your own testimonials with #IPNResiste to help spread the word.

Catalytic Communities, the Brazilian NGO and USA 501[c][3] nonprofit that runs RioOnWatch, can act as fiscal sponsor for those who would like to make a donation to IPN online here. Please write “IPNResiste” in the “earmark” category. Or simply message donate@catcomm.org informing us that your contribution is earmarked for “IPN Resiste.”

To learn more, watch this four-part series shown to visitors at the IPN in Rio [WARNING: Strong Images]: