No Boston Olympics: How and Why Smart Cities Are Passing on the Torch, written by Chris Dempsey and Andrew Zimbalist, author of Circus Maximus: The Economic Gamble Behind Hosting the Olympics and the World Cup, covers the fight against bringing the Olympics to Boston.

When a group of Boston elites organized to bring the 2024 Summer Olympics to Boston, Massachusetts, concerned citizens decided to fight back. Despite the Olympics’ many promises, a long history of problems have plagued host cities once their Games have gone. Significant financial deficits, massive displacement of locals, and the so-called “white elephants”–costly stadiums for which the host city no longer has any use–are all notable examples. Dempsey, former Massachusetts Assistant Secretary of Transportation, and Zimbalist, economist and mega-event expert, recognized the threat of a Boston Olympic bid and mobilized a movement to stop it. Although their movement seemed like a modern David to the domestic and international Olympic supporters’ Goliath, the No Boston Olympics movement ultimately triumphed. No Boston Olympics offers a close look at the efforts made by a group of dedicated citizens to end the Boston 2024 Olympic bid.

After an unsuccessful start in 2012, the bid to make Boston 2024 a reality truly took off in March 2013 with the support of John Fish, business owner and Boston magazine’s #1 most powerful person in Boston. With the support of Boston’s longtime mayor, Tom Menino, Fish crafted a campaign for Boston to bid for the endorsement of the United States Olympic Committee (USOC) as the official American applicant city for the 2024 Olympics. They rapidly amassed a well-funded group to organize an Olympic bid for Boston, securing the endorsement of Governor Deval Patrick, Boston industry leaders, and political higher-ups. They created a movement and energized the necessary business leaders to fund a major campaign to win the USOC Olympic bid.

The start of a movement

Meanwhile, Chris Dempsey, Liam Kerr and Kelley Gossett created a grassroots movement to oppose the Boston 2024 bid. The three Massachusetts natives had experience working in local Boston politics and united over concerns about the bid. The three feared the bid project might lead to extremely inflated costs for the city. As the International Olympic Committee (IOC) encourages various parties to bid for the Games, prices and spending can skyrocket as each city competes to win the committee’s favor. The Boston 2024 boosters, Fish and his partners, would be negotiating on behalf of the city, but the city and its citizens would ultimately be the ones responsible for any excessive costs. Dempsey, Kerr and Gossett knew this would not end well for taxpayers and the general public. Together they created a group, named No Boston Olympics, to oppose this burden on their city. 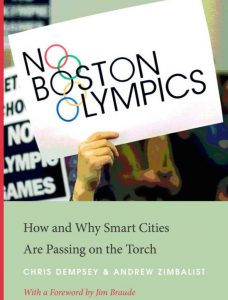 No Boston Olympics was forced to fight strategically to triumph over the Boston 2024 boosters. No Boston Olympics could never come close to Boston 2024’s resources or financial and political power. Practically all of the important players in Boston politics, including newly elected Mayor Marty Walsh, had lined up behind Fish’s group. While Boston 2024 courted the USOC, No Boston Olympics focused on changing the city’s public opinion. The group engaged with citizens in whatever way possible. Social media platforms like Twitter and Facebook allowed them to quickly and cheaply disseminate information through followers. Through both organizational and personal Twitter accounts, they were able to engage with activists and media members more effectively than the Boston 2024 boosters. Their trending hashtags, like #PullTheBid received coverage by several news outlets in the Boston area. They took advantage of these media opportunities to challenge unfounded claims by Boston 2024 and a general lack of transparency through the process. Zimbalist, who serves as Professor of Economics at nearby Smith College, joined the efforts of No Boston Olympics. He wrote editorials and spoke out to highlight the inherent problems in the bidding process. The group also held town hall meetings with various experts to explain the challenges that come with hosting an Olympics. Meanwhile, the Boston 2024 backers shunned any potential encounters with its critics or the public at large as they grew closer to securing the USOC’s endorsement. Boston 2024 submitted its bid to the USOC without allowing any of the public or media to read the conditions to which the city would be agreeing.

On January 8, 2015, the USOC officially declared Boston the United States’ bid city to host the 2024 Summer Olympics. As the committee explained the now-public plans, major potential issues became even more visible. No Boston Olympics highlighted these concerns, bringing necessary public attention to the potential negative consequences of the Games. Public parks would be taken over, necessary public transportation would need to be massively overhauled, and efforts would be necessary to curtail certain political dissent. State legislators began working to enforce greater transparency and accountability for the boosters. Major problems during an especially snowy winter exposed the faults in Boston’s public transportation system and the public, too, grew concerned. As issues with bid documents, potential financial liability, and more, arose, No Boston Olympics was prepared to further scrutinize these concerns. Boston 2024 became more unpopular with both general Bostonians and politicians, including newly elected Governor Charlie Baker. Finally, on July 27, just half a year after selecting Boston as its bid city, the USOC withdrew its support of Boston’s candidacy. Despite daunting odds, No Boston Olympics had succeeded in preventing the Olympics from coming to Boston.

No Boston Olympics: How and Why Smart Cities Are Passing on the Torch thrillingly details the difficult process to challenge the city and country’s business and political elites, and win. Its clarity and thoroughness make it both an easy read and necessary reading for resistance efforts against mega-events. No Boston’s strategies will inspire future cities’ work resisting the Olympic Games. Activists should engage the public to consider the Olympics as any other major public investment: promoting a transparent deliberation process that thoroughly weighs costs and benefits to their city. The ubiquity of social media allows activists to engage with concerned parties more directly and effectively than ever before. No Boston shows that, though the fight is not easy, it is possible to win. With No Boston Olympics, Dempsey and Zimbalist offer a look at successful resistance efforts that can hopefully be exported for future resistance work, including the latest battlefield: Los Angeles.