Emotion and excitement filled the Gilberto Gil auditorium at Rio’s National Historic Museum (MHN) this past Thursday, May 18 on International Museum Day as the museum received Vila Autodromo’s archive of documented history and struggle against evictions. The favela, located next door to Rio’s Olympic Park, faced enormous eviction pressures from the City, but a small group of families managed to remain to the end. The entire community except for its Catholic Church was demolished, and only twenty families managed to stay in newly built houses. The ceremony marked a symbolic moment in Brazil’s history, where for the first time, the MHN engaged in a collective process to create a space of action and resistance, beyond a traditional museum display. As resident and activist Maria da Penha powerfully stated, “the archive serves as a resistance tool more so than simply preserving memory.” 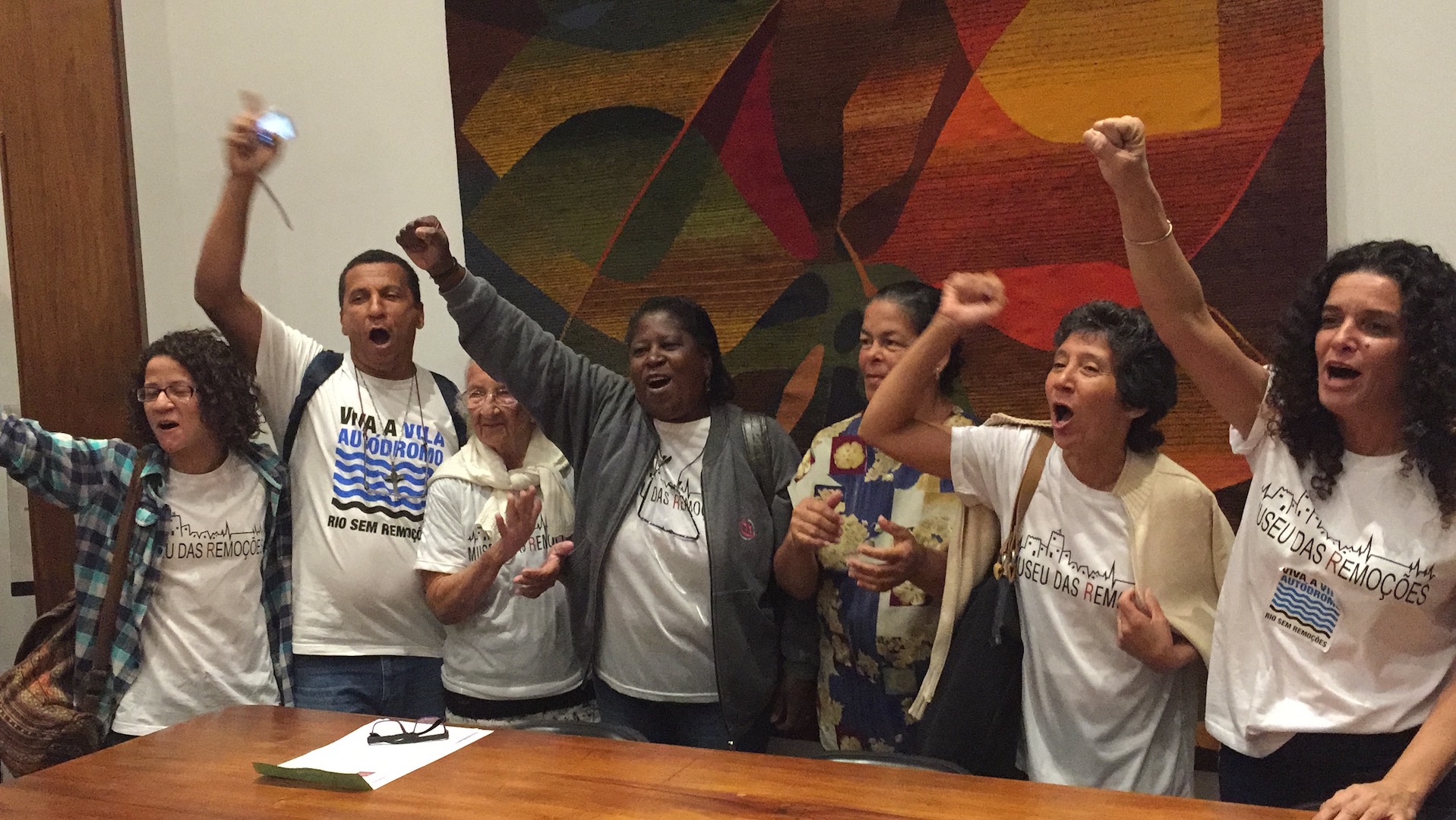 Members of the MHN and Vila Autodromo residents met several times to discuss the archive and which pieces should be displayed and preserved. As the MHN representative said, “the objective goes beyond bringing a social movement into the MHN, but to collectively construct the space with the participation of Vila Autodromo’s movement.” This new, participatory way of museology focuses on resistance and action, and adds yet another breakthrough to the long list of impacts that have come from Vila Autodromo’s struggle. For the residents who fought so hard against the vicious eviction tactics of the City, the archive’s presence in the National Historic Museum is a symbol of strength and resilience.

Along with documents and photographs, the last remains of the original Vila Autodromo were given to the museum. These materials included, among others, a window grid from long-time resident Mainha’s home on Gilles Villeneuve Road, one of the last homes to be demolished. Mainha had previously been evicted from Favela Via Parque in Barra da Tijuca before relocating to Vila Autodromo. Hexagonal paving stones previously part of the sidewalk of long-time resident Adão’s home on Beiro Rio Road, whose house had served as a spiritual center, were also submitted. And a bomba sapo water pump owned by Sandra Maria, which had been constantly shared among neighbors as a sustainability tool to clean the environment and bring potable water to the community. Throughout the eviction process, former Rio Mayor Eduardo Paes constantly accused Vila Autodromo of causing environmental damage, when in fact the community participates in several sustainability projects without any help from the state.

One of the most symbolic remains to be delivered to the MHN was a brick found in the ruins after demolition, and whose owner is anonymous. Some 700 families were evicted, and with only 20 who remained, many of the ruins had unknown owners. This “anonymous” house brick is a symbol for all those “anonymous” people who were evicted within and beyond Vila Autodromo, and marks the importance of the fight to exist that so many favela residents face. 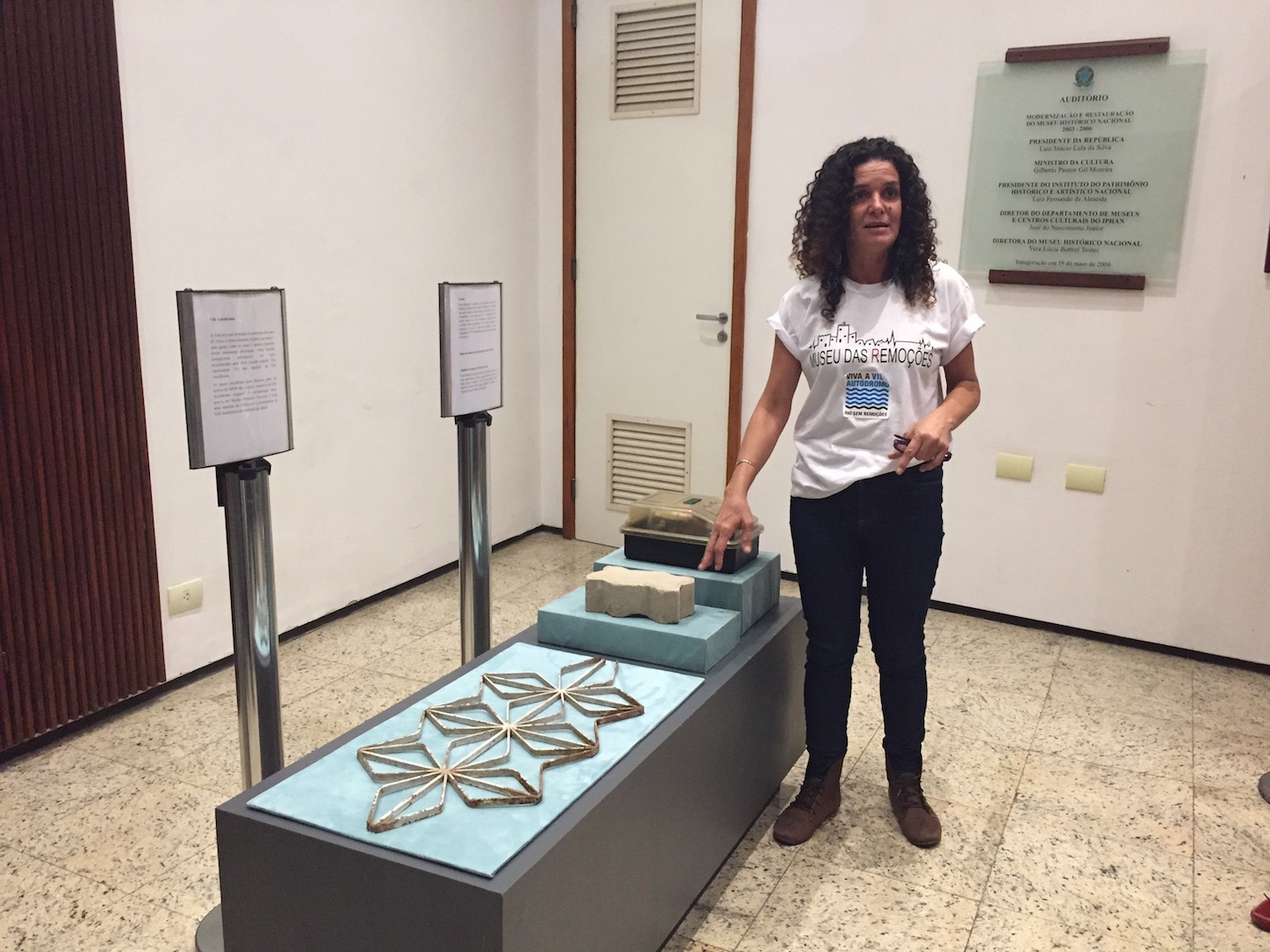 To add to the cause for celebration, May 18 also marked the one year anniversary of the founding of the Evictions Museum, a museum created by Vila Autódromo and other favela residents, university and NGO partners, as a resistance tool documenting the community’s fight to remain on their land, their right to exist, and the beauty of their residents, community, culture and dedication to social and environmental justice. The museum was created as more than a space for preserving memory and history; it also reaches out to communities who either previously or currently experience evictions. Throughout the ceremony, favelas such as Via Parque, City of God, and Morro do Castelo were remembered. It was important for Vila Autodromo’s residents that their Evictions Museum transcend space, and in addition to the archive, the MHN has reserved a space in its upcoming long-term exhibition, titled Citizenship under Construction, for the Evictions Museum. As the representative for the MHN at the ceremony emphasized, that space “won’t be an invention of the MHN, but one that Vila Autodromo contributes to.” 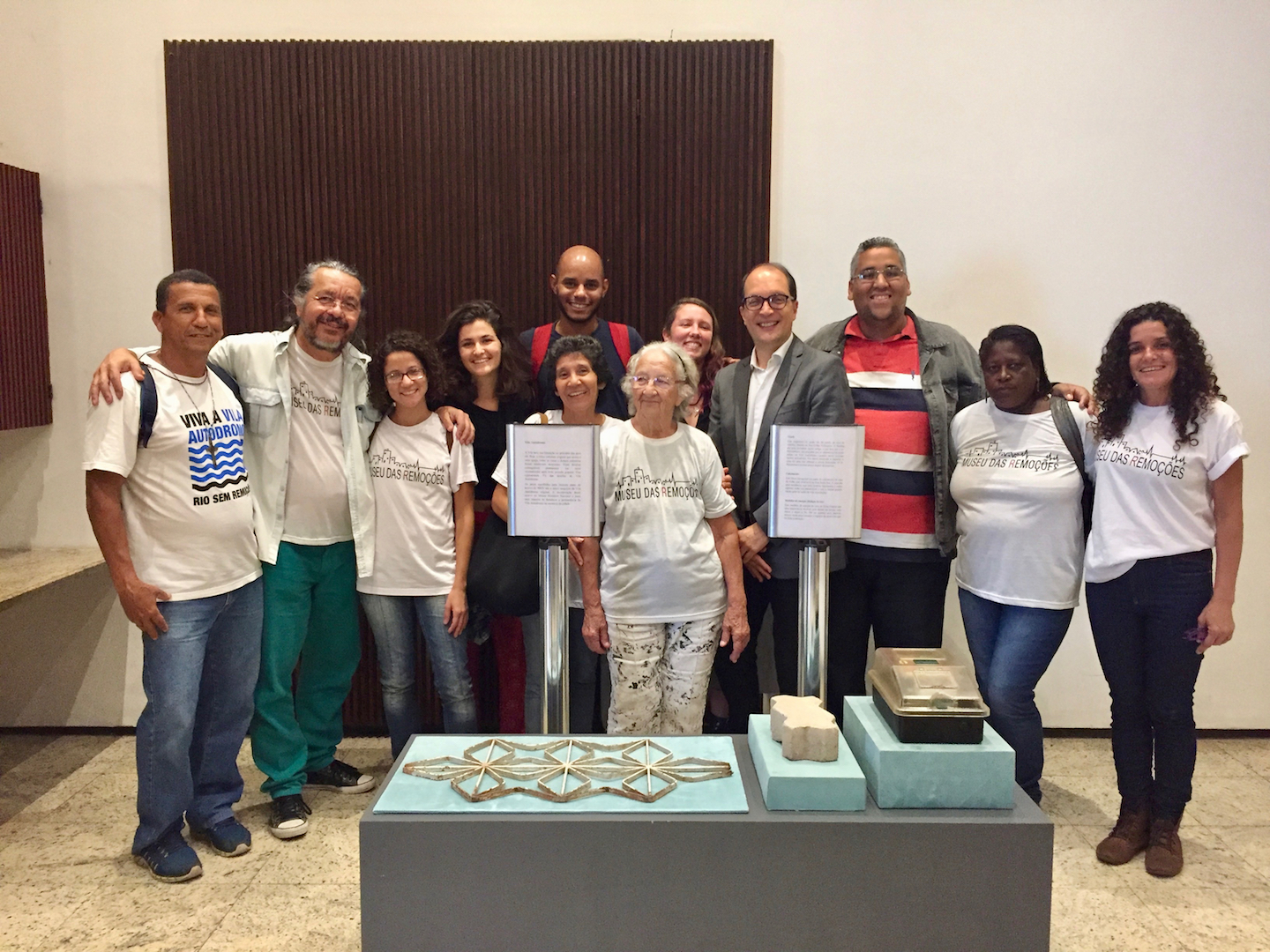 Despite the painful memory of Vila Autodromo’s struggle shown in the powerful presentation made by Sandra Maria, the ceremony also contained emotions of joy, power, and hope. Vila Autodromo and the struggle it represents transcends spaces, and is now occupying the National Historical Museum, bringing hope for further mobilization and empowerment of favela residents, and for eventual social transformation. As Vila Autodromo residents defend: “history should not be erased.”