On February 24, 2016, the City of Rio demolished Heloisa Helena Costa Berto’s home, one of the last houses to be destroyed in Vila Autódromo next to the Olympic Park. Over one year later, RioOnWatch caught up with Heloisa Helena to learn about life after eviction, her reflections on the Olympic City, and her current struggle to raise black consciousness in the face of pervasive religious and racial discrimination in Brazil.

Heloisa Helena Costa Berto’s bus ride from her new home in Guaratiba to Rio’s downtown Centro usually takes from three to three and a half hours. Her previous home in Vila Autódromo was sometimes still a two-hour bus ride to Centro, but it was nestled in the midst of the rapidly developing regions of Jacarepaguá and Barra da Tijuca. Living there didn’t feel like being on the city margins the way living in Guaratiba does. For Heloisa Helena, the removal of most of Vila Autódromo must be contextualized in Rio’s long history of pushing the poor to the periphery to create an elite city.

“When [Mayor Eduardo Paes] said he would sanitize Barra da Tijuca, removing Vila Autódromo…it was like we were dirty. No, no, no, no. We were normal people living in normal houses. The houses were made of completely normal bricks. My house was normal. It was a poor house, in accordance with my situation. But it was a normal house… This tendency of sanitizing the city, it’s nothing new… This began in the era of Pereira Passos who was a mayor here in Rio de Janeiro many years ago, who began to remove and destroy the favelas. And he created the city and removed people and put people on the margins of the city. Marginalizing people. For example, I‘m now living on the city margins… because I don’t have the conditions to live here [in the center] anymore… In general this happens to who? To people who are poorer. The poorer people are black. They don’t want to see black people there, they don’t want to see poor people there.”

Heloisa Helena suffered greatly from a drawn-out negotiating process over her Vila Autódromo house, which was not only her home but also a sacred site for her practice of Candomblé. Candomblé is an Afro-Brazilian religion that has long faced discrimination throughout Brazil. While Mayor Eduardo Paes was telling the press that anybody who wanted to stay in the community could do so, city officials intimidated and pressured her, insisting residents would have to leave. On how this gap between public and private statements made her feel, she said:

“It’s a sense of impotence, because you really feel that in reality it’s a very big political game… As for the negotiator, he got pleasure from making people feel worthless. It’s his work: to make someone feel worthless, to leave the person feeling like less. Why? Because he could lower the price of the person’s house and pay basically nothing for it. As they did the demolitions, they destroyed the walls of a house, leaving the debris behind to create…a post-war appearance. So that the people who [hadn’t yet negotiated] would feel miserable, to the point of wanting to leave that place. Only he didn’t count on there being so many people, there being a group that resisted, even with all of this happening.”

It was thanks to the resistance of their neighbors that those families who left received higher compensations than what they were originally offered. A select few families were able to be resettled in twenty new houses on the community’s original site, even as others who wanted to remain—like Heloisa Helena—were excluded from this final settlement. Heloisa Helena stressed this resistance was about much more than the pre-Olympic months that received the most intense global media coverage:

“That struggle, it wasn’t just won now. Those 20 houses that are there, this wasn’t just won now. That was a struggle from 20 years ago. It was all the former presidents of the community who fought hard to arrive at this point. It’s Dona Jane, who left. It was my stepfather who was president of the Neighborhood Association, who fought. Teresinha, who also isn’t there now, who also went to the UN to speak about Vila Autódromo. This was 20 years ago. And Dona Inalva, who isn’t mentioned as a fighter. All these people were fighters. They are the warriors who aren’t mentioned.”

She acknowledges that her own resistance began relatively late in the process. She started to write about her experience through letters she published as articles on RioOnWatch in 2015.

“I had a necessity to put it out there, what was happening… It was a form of exposing what was happening, not just with me, but with everyone… In the moment when I wrote, things were in a situation that was so difficult, so painful, that the only way—I feel, one of the last ways—for us to defend ourselves was exactly to make the subject public. So it was a form of defense. For this reason I decided to expose my story.”

In addition to being a form of defense, sharing her experience also turned out to be a huge emotional outlet for Helena Heloisa, who was suffering from physical ailments and depression as she negotiated with the City.

“I felt a liberation, because it’s very bad to be trapped with your feelings. And when you share what you feel, when you put it out there, you feel liberated. Of trying to do something to make things better. Because I was very wounded, very wounded. I was wounded in the deepest thing I had, which was love for my religion. I was humiliated when they called my religion trash. I was very wounded…. I want respect. I don’t want to be tolerated. I want respect.”

She also began to tell her story at public events. From Senate and UN meetings in Brasília to academic seminars and meetings of black students across the country, she denounced the violations of her community’s housing rights and spoke out about the particular “religious racism” she experienced as her Candomblé site was destroyed but the neighborhood’s Catholic church was left intact. Heloisa Helena’s fight against religious racism is now her main focus, the driving force behind several projects she is currently working on. One of these is a collaboration with a State representative to get the term ‘religious racism’ (racismo religioso) explicitly recognized by law, instead of just ‘prejudice’ (preconceito). She explained:

“Using the phrase ‘religious racism’… any person who commits some act of religious racism, the person will be penalized with the same penalties as for a crime without the option for bail. I do interviews to learn about the people who are being threatened, or who are suffering racism, so I can put all this in the document.”

She is tracking a wide range of racially-motivated discrimination cases across Brazil. In one case, a man was imprisoned after he was playing atabaque, a traditional Afro-Brazilian hand drum, and his neighbor complained. The neighbor called him a “monkey witch.” Heloisa Helena is particularly concerned about the number of recent cases in which traditional spiritual centers have been invaded and set on fire, especially in the State of Goiás, which envelops Brazil’s capital city.

“There are many cases. I want to document all of this—to make this document so that it can become law.”

In addition to her research work, Heloisa Helena is working with State representative Flavio Serafini to rescue and preserve a collection of traditional religious materials that were seized by police over a century ago:

“More than 100 years ago it was a really bad time for people who were Spiritualists. Because the police came, entered and took all our materials. They kept all of them in the police station. All this material was taken from many umbanda and candomblé centers, it’s all now in a Military Police museum. The name they’ve given these materials is something like, ‘demonic materials.’ They gave them this title. And this already carries enormous religious prejudice. And now we’re beginning this project to free all this material and put it in a museum—we don’t know what location yet since we’re still planning. We have to see what the correct location is so that this material is conserved correctly.” 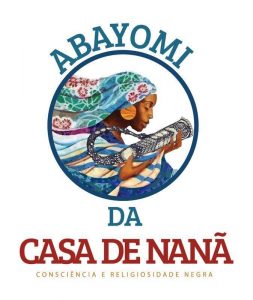 To raise awareness about these examples of pervasive racial and religious discrimination and about projects that aim to tackle it, Heloisa Helena is starting a blog that brings together reflections, photographs, and interviews from her research. She also plans to use the blog to contribute to what she sees as a growing black consciousness movement in Brazil. Reflecting on Brazil’s abolition of slavery in 1888, still celebrated on May 13 each year, she said:

“In reality, they put a ton of black people in the street without any structure and without any public policy so that they could sustain themselves. Today, still, we’re in the same situation. I think slowly, only since a few years ago, we’re beginning to make our voice heard, with globalization and with rising consciousness now, and with even the cultural valorization of the way of speaking, of religion, of hair, and liberty. I wear colorful clothes in accordance with my culture, with my heritage.”

Still, she points to examples of friends who “refuse to say they are black.” She argues the law requiring schools to teach black history and culture is not followed and as a result “the black child is ashamed to be black.”