From Friday July 7 to Sunday July 9, the Horto Residents’ Commission organized the Arraiá do Horto. With the motto “From Arraiá to Arraiá, Horto resists,” the tone of the arraiá Brazilian annual cultural event honoring the nation’s rural roots was set. Horto took advantage of its traditional celebration to mark one more year of resistance in a two-hundred year history which has intensified in the past years due to eviction threats from the federal government. Many people from the community and outside joined together in honoring the community’s struggle in a celebratory fashion.

As Emerson da Souza, current president of the Horto Residents Association explained, the idea behind this particular edition was to reunite community residents and revive resistance and community spirit. According to Emerson, the authorities’ strategy so far has been to “eliminate places where the community meets and organizes itself politically.” He explained that “in the 1950s, this was a semi-rural zone.” Horto has been organizing arraiás for years, but with the current tense threat of eviction, this edition is even more important. Apart from typical food and drinks, the Horto Residents Commission was also selling “Horto fica!” (Horto Stays!) t-shirts.

The historic community of Horto is situated in the South Zone of Rio, between the Botanical Gardens and the Tijuca National Park. It has existed for over 200 years and has been under threat of eviction from the Botanical Gardens since the 1960s. According to Emerson, there are around 500 families still under threat of eviction in the community and he ensured evictions have no legal basis and are purely linked to “real estate speculation.” People in Brazil are now living under a “capital dictatorship,” he said.

Moacyr de Oliveira Paiva Jr, who presented himself as the Founding President of the Horto Residents Commission, also denounces evictions as unconstitutional, explaining the majority of Horto residents’ ancestors came to work in the Botanical Gardens, the same Gardens now trying to evict them. Indeed, the Gardens’ legal actions against Horto residents were first submitted in 1985 while Brazil was still a military dictatorship and before the Brazilian Constitution was established. He said his wife Beatriz is the fourth generation in their family living in Horto and their daughter Laura thus of the fifth generation. In the same vein, Emerson pointed up the hill to a huge double-standard: “there are houses in the forest above the Gardens, why can they stay and not us?” 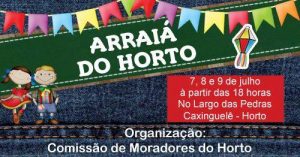 The Horto Residents Commission and Association have been working together to fight eviction for years and have used all legal resources available to them. Many residents received notice of eviction without any offers of alternative housing or compensation. The future of the community remains highly uncertain. In 2013, Horto was included on the Brazilian Conflict Map of Health and Environmental Injustice put together by the National Public Health School (ENSP). That same year, the Horto Museum was recognized as a “point of memory” among Brazilian museums.

The arraiá was a moment of being together, sharing ideas, food, drinks and taking back Horto’s public spaces, a brief moment of celebration and joy along its battle. But on Monday July 10, the Commission had already planned a meeting to think about resistance to eviction and plan new actions. The arraiá was also another occasion to engage supportive outsiders in the cause. Long-time partners, the National Movement for the Fight for Housing (MNLM) was present and held a food stand. As Moacyr said, “if it happens in (such a historic community as) Horto, it can happen anywhere.”