It has been a year since I presented here on RioOnWatch a view of the negative legacy, or the suburban legacy of the 2016 Rio de Janeiro Olympics, and much has evolved in terms of research on this subject, although the urban regeneration of this part of the city has not been addressed at all. At present, discussions on Rio’s Olympic legacy occur at all levels of government (federal, state, and municipal) and in all branches (executive, legislative, and judiciary), with regard to what to do with the structures built or reformed for the Olympics: the buildings, stadiums, fields and swimming pools. But these discussions only deal with these areas, which together amount to half a million square kilometers within a municipality with a total of 1200 million square kilometers.

The article a year ago on RioOnWatch had great repercussions, attracting interested people from all over the world who wanted to see the Ramos suburb, for until then the international image of Rio de Janeiro was one of either beautiful coastal neighborhoods or large favelas, as if there was nothing in between these social and urban extremes of Rio. They were surprised to find that the population of Rio’s beachfront (South Zone, Barra da Tijuca and Recreio) corresponded to only 16% of Rio’s population (IBGE Census 2010) and that the population of the favelas to 24%, and soon realized that most cariocas lived in the until then nationally and internationally ignored suburbs.

The first report was by Polish TV, which, after seeing the neighborhood of Ramos and its icons of Olympic abandonment, wanted to see other locations of the Leopoldina area in the North Zone of Rio. I took them to the Manguinhos Station and after some filming we were ‘kindly invited’ to leave the station and stop filming by a person with an Uzi who was pointing the machine gun at us from the side of Leopoldo Bulhões Street. At that moment the Poles grasped a subtle difference between suburban areas and favelas.

The second article that I accompanied was for the American news site Vice. After following the script about the destruction of the neighborhood by the Olympic construction works, I took them to Penha Church, from where we could see Complexo do Alemão and I could explain the tenuous urban differences between suburbs and favelas in a safer environment than I did with the Poles. It stood out that, for Vice, the City of Rio issued an official note just like the one it had issued for the newspaper O Globo, trying to explain–with some questionable information–what had happened in Ramos. The publication by O Globo also came as a result of the original story published on RioOnWatch.

Soon after, French journalists from various media outlets came, interested in the matter because of the proposal to host the Olympics in Paris, showing Rio de Janeiro and the ‘benefits’ of being a host city. It was easy to show the Ramos River that passes through the neighborhood, and that continued polluting the Guanabara Bay due to the untreated sewage that is discharged into it from Alemão and other neighborhoods of the Leopoldina area. As we know, the legacy of a cleaned up Guanabara Bay was never realized, and as a post-Olympic legacy in terms of clean-up projects we had a mere shift of focus towards the clean-up of Barra da Tijuca’s lagoons, located far away from Ramos but with an intense real estate market aimed at a specific audience of the city, “not housing for the poor.” 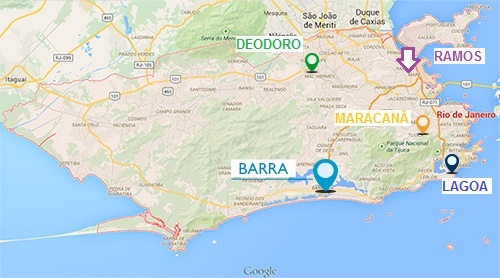 Even the perception of having low-income people in the surroundings of the Jacarepaguá Lagoon have led post-Olympic Rio–whose legacy was a declared lack of resources to manage the city–to discover new sources of funding to maintain the policy of speculation of the “Olympic City” in the vicinity of Barra da Tijuca, including prioritizing favelas that “do not fit” with the surrounding region. The new bet for upgrading investment is Rio das Pedras (a large community on the banks of Barra’s lagoons) through a Public-Private Partnership (PPP), a model similar to that of the Marvelous Port revitalization project, recently declared unviable by its own implementation agency.

Meanwhile, returning to Ramos, what was shown on RioOnWatch and publicized around the world, did not draw the attention of the City of Rio. The only change in everything that was presented was the pedestrian bridge that had been left unfinished in the neighborhood, which used to have a wooden handrail that was about to fall off, and now has a brick handrail that is about to fall off.

The Olympic legacy brought other consequences of pollution, including a worsening of respiratory health of children from zero to four years of age, which the first statistics on Hospitalization for Acute Respiratory Infection after the construction of the BRT TransCarioca in the region revealed. In 2014 the Ramos Administrative Region, which includes the districts of Ramos, Olaria and Bonsucesso (all of which received the BRT TransCarioca express bus corridor as part of the region’s ‘Olympic legacy’), presented the worst results in this indicator in all of Rio, with 33 of every 1000 children hospitalized.

According to Land Use data of the Instituto Pereira Passos (IPP), linked to the City of Rio, the administrative region of Ramos ended up with the Olympic legacy of third worst availability of public green leisure areas in the city, not even reaching the minimum availability recommended by the World Health Organization (WHO) of 12 square meters of public green space per resident.

Rio de Janeiro’s 2017-2020 Strategic Plan (a recently published document that contains the newly elected mayor’s management plan and which is currently receiving comment online) mentions that the population of Ramos, the residents of Planning Area 3 (North Zone, excluding Tijuca), has already been awarded the Madureira Park (located 11 km away from Ramos). That is, there is no plan to create areas that will compensate for the green areas lost as a result of the construction works for the Olympics. Yet another municipal administration has failed to take note of this issue.

More recent news reports mention that exactly on the Ramos stretch (Lot 2 of the BRT TransCarioca) of this Olympic construction work that links the international airport to Barra da Tijuca, there is an official report of corruption, involving a bribe not only to the former municipal Secretary of Public Works, but also to the Municipal Accounts Tribunal (TCM), which should be responsible for ensuring the smoothness of the City of Rio’s actions.

“In the present case, the facts reported are not, at least at this time, presenting any of the characteristics that would evoke diffuse, collective or homogeneous individual rights, therefore not triggering any measures, whether of an extrajudicial nature or of a judicial nature, to be adopted by the Public Prosecutor’s Office.

Thus, cases in which there is little social relevance and the number of people affected is not large, and cases that are easily resolved at the administrative level, should be resolved by public officials, intervention at ministerial level being justified only in the case of unequivocal omission. For if for every irregular establishment, street closure, sidewalk occupation or irregular construction, a civil inquiry has to be instituted, the performance of the Public Prosecutor’s Office in the collective protection of the urban planning order will be doomed to failure, and so the human and material resources cannot be used for any and all reports of damage, ministerial action being also justified as an acting body when there is social relevance.

For these reasons, based on the authorization of article 8 of the GPGJ Resolution No. 1769/12, the ARCHIVING of this representation is determined, due to its REJECTION.”

The great summary of this post-Olympics year is that the neighborhoods of the Leopoldina area (in the North Zone which was originally programmed to benefit from an earlier proposal to host Rio 2004) will remain within the politics that prevailed in the past half century–of neglect and abandonment.

Geographer Hugo Costa is a blogger who resides in the Ramos neighborhood of Rio’s North Zone.

See Hugo Costa in this TV report on the damages caused by the TransCarioca (in Portuguese):