Rafael Braga was detained during the 2013 demonstrations for carrying a bottle of Pinho Sol disinfectant, and again in early 2016, a month after being released to serve his sentence in freedom, for possession of drugs, which many claim were planted by police. The second time, he was sentenced to 11 years for drug trafficking. Ogo Alves da Silva, now of age, has been detained in a Degase (Rio de Janeiro Department of General Socio-Educational Action) unit since 2015, accused of stabbing a medical doctor who had been cycling around the Rodrigo de Freitas Lagoon in Rio’s wealthy South Zone.

Both have some things in common: they are young, black, and poor. Rafael was homeless. Ogo was a resident of the Manguinhos favela in the North Zone of the city, which according to witnesses is where he was when the crime happened, more than 15km away from the Lagoon.

But the police needed a suspect to calm things down after a crime that shocked everyone–a life for a bicycle, a doctor, in the city’s South Zone. So police officers went to Ogo’s house in Manguinhos, who had a record for thefts in the Lagoa area. There not only did they find his mother, dona Jane, but they also found knives. Dona Jane is a waste picker, and the knives that served as proof against her son are her work implements when collecting and handling garbage.

The only witness to the crime, a gas station worker, said at the time that there were two criminals, a white and a black man, but that he would be unable to recognize them because of how quickly the incident happened. Two days later, when Ogo was arrested, however, he recognized him in a photo as the offender, in a statement with several discrepancies in relation to his former statement. 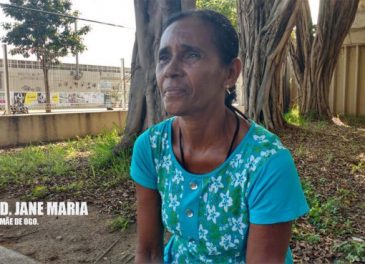 Rafael and Ogo remain in jail even in the absence of evidence condemning them–or rather, in a selective use of evidence and testimonies. Ogo was convicted based on a contradictory testimony and an alleged weapon found in his home, but was not acquitted even after being cleared by someone who confessed to the crime. Rafael was arrested with a small amount of drugs and based only on the testimony of the police officers themselves, as is often the case for young black Brazilians. But the differences between what characterizes non-criminal drug ‘use’ and drug ‘trafficking’ are not well defined in law, leaving judges to decide in each case. And justice has a much greater probability of defining the act as trafficking when the subject is black than when they are white, even when the quantities are the same. The Ogo and Rafael cases illustrate the worst aspect of our judicial system: its institutional racism and the criminalization of poverty that give sentences on the basis of color and social background, and give whites and blacks unequal access to legal means.

Rafael and Ogo have something else in common: both were tried yesterday, in Rio de Janeiro’s Court of Justice. Rafael’s habeas corpus petition was rejected once again yesterday and he will remain in jail until trial. In Ogo’s last trial, one of the judges voted in favor of his acquittal, and so the case was retried. He will continue to serve his sentence in Degase.

At Degase, Ogo’s behavior has a very positive record and he is already attending the high school, having arrived there at 5th grade level. In addition to highlighting his good school performance, teachers said that Ogo has two dreams: to live in Barcelona, ​​because he loves cycling and he heard that the city has many bike paths, and to be a lawyer, to fight against injustice.