For the original article in Portuguese published in Belezas Negras click here.

Clothing brands, designers, and producers have once again excluded black beauty from the runways, as Fashion Rio launches its new collections for Summer 2013. Young black professionals who deserve the chance to be part of the cast of the runway shows and fashion week events are kept out of this professional space. This despite an agreement made with the agency in charge of hiring, which promised to set aside a percentage of jobs for black models. The clothing companies did not honor the agreement.

Educafro denounced the discrimination with yet another protest:

“Close to 20 people staged a protest against racial prejudice outside of Fashion Rio, the city’s fashion week, taking place between Tuesday, May 22 and Saturday, May 26 at the Jockey Club in Gavea. The protesters called for more black models in the runway shows, and said they had not noticed an increase in casting in recent years. ‘The fashion weeks need to realize that we are 51% of the Brazilian population, so at least 20% of the models onstage should be black. And at the moment we’re not even close,’ said Frei David, executive director of Educafro.” 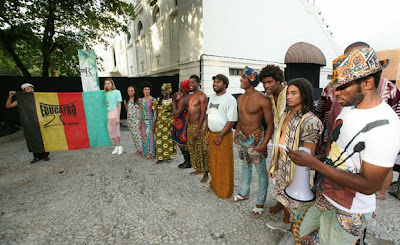