“If this house falls,… it will take everything else (on the hillside) down with it. There will be a total disaster, and the Prefeitura (City) knows it,” says Irenaldo Honrário da Silva, President of the Cordovil Resident’s Association, as he points to a house clinging to the hillside, built on slick soil with a cracking foundation. 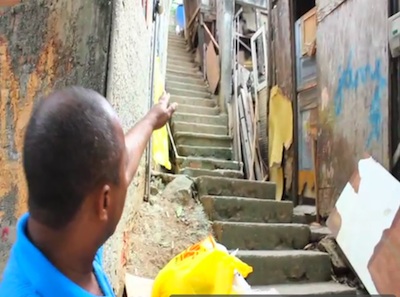 The site of Pica-Pau, a community located in Rio’s North Zone region of Cordovil, is bleak and neglected. The streets flood when it rains and pollutants, from the already clogged drains, back the water up and create what residents refer to as the “little lake” in the streets. This lake, Irenaldo describes, is filled with hazardous waste and trash, and acts as a breeding ground for mosquitoes and disease-causing bacteria. In addition, the only “green space” in the community of 3000 people, is one paved courtyard, enclosed in a chain-link fence, surrounded by Avenida Brasil, one of the largest roadways in the city, on one side, and an overflowing trash dump on the other. 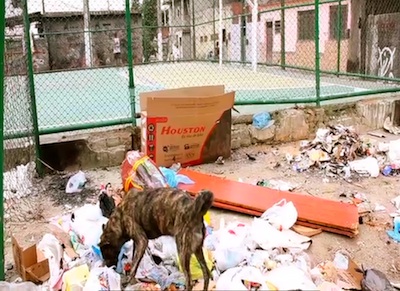 As kids play soccer in the courtyard and a hungry dog picks through the trash, Irenaldo describes the need for leisure space in the community. He states that there are at least 1600 youth in Pica-Pau, and this courtyard, which lacks trees, playing equipment and tables, is the only place for people to gather and foster the idea of community. Pica-Pau has grown since it was founded in 1962 because of its location. The community is relatively near the city center, where most jobs in Rio are based. In addition, it is situated near Linha Vermelha, a main artery of the city’s roadway system, and many bus stops along Avenida Brasil.

Government’s neglect of the community is hard to explain. One would think that the high percentage of crack-cocaine users and open sewage would put it on the government’s radar as an area in need of investment and urgent attention.

Pica-Pau residents tend to be of northeastern Brazilian descent, having come to Rio looking for work and finding no option of affordable housing. As is frequently they case, they set up makeshift houses, one on top of the other, without any aid from the city. 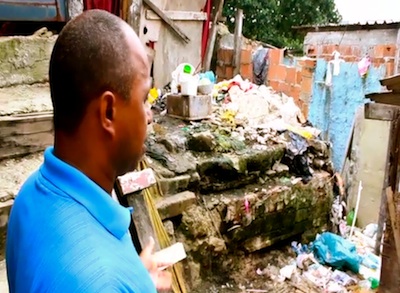 Antônio is a resident of Pica-Pau, and lives in one of the unstable houses on the hillside. His father built his house, and he has been helping renovate it since he was a boy. “Since I was 18, I have been working a bit, saving money to buy materials to continue building the house and then returning to work to save more,” Antônio explains. Although he is proud of the work he and his father have put into the house, he continues to describe the structural problems. The house sits on an incline, and neither he nor his father were prepared to build the house as soundly as necessary.

Community members express their frustration as Rio moves forward, investing in public works and renovations in preparation for the 2014 World Cup and 2016 Olympic Games. Irenaldo sighs with resignation as he acknowledges the attention and infrastructure being put in other communities like Santa Marta and Cantagalo, in Rio’s chic South Zone, as he looks out over Pica-Pau at the man-made water lines and unstable buildings. He points over the ledge to the last piece of city infastructure that was invested in in Pica-Pau: a fence in the middle of the hill, between falling houses, used to stop houses and stones from continuing to slide down the mountain.

Pica-Pau’s case will be featured in Catalytic Communities’ film, “Favelas as a Sustainable Model,” to be launched during the Rio+20’s People’s Summit in June.