On Tuesday, September 19, a team of museologists and Vila Autódromo residents presented the Museological Plan for the Evictions Museum, an open-air territorial museum that was created in May 2016 to document both the community’s eviction process and the struggle against it. The presentation took place in Vila Autódromo’s Catholic Church, a symbolic site of struggle that was spared from demolition.

Museologist Joy Mendes explained that a museological plan is “a plan of action, a strategic plan.” Her colleague Alex Rodrigues Venancio described it as an essential tool for defining and organizing the priorities and activities of any museum project.

The Evictions Museum’s Museological Plan has been developed through a collective process with input from Vila Autódromo residents and a range of supporters—not only museologists but architects, urbanists, sociologists, and residents of other Rio favelas.

On Tuesday, resident and activist Sandra Maria contextualized Vila Autódromo’s struggle against eviction in Rio’s long history of government projects to displace the poor. Other communities, she reflected, had experienced “cowardly” evictions that were “barely documented.” In contrast, Vila Autódromo drew unprecedented media coverage as its residents battled to remain on the edge of the Olympic Park. 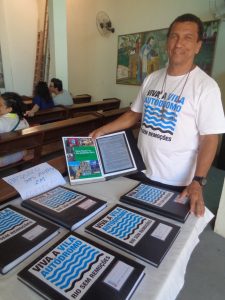 However, it was not only journalists documenting the story as it unfolded, but residents themselves. Resident-activist Luiz Cláudio da Silva, for example, is currently in the process of organizing albums from thousands of photos, official documents, and clippings of materials posted on social media, with many photos dating from the years before evictions began. In this sense, the Evictions Museum can be seen as a more strategic and formalized step in a process of documentation and preservation that began long before the museum was officially launched.

One main objective of the Evictions Museum, Sandra Maria explained, is the preservation of memory—”not just of the population evicted from Vila Autódromo, but of all people who have been evicted or threatened by eviction.” A second objective is for the museum “to serve as a tool for the struggle,” because throughout Vila Autódromo residents’ own battle, they saw first-hand evidence that “memory is the strongest instrument in this resistance struggle.” Sandra Maria read a formal statement written by four residents on the emergence and purpose of the museum, which concludes with the simple statement that grounds the project: “memory can’t be removed.”

In addition to the type of visual materials that Luiz Cláudio da Silva is compiling in albums, a key aspect of the Evictions Museum is its “living” nature—the entire territory of Vila Autódromo itself is part of the “living archive.” As such, one of the museum’s projects is to use the neighborhood’s 20 houses as exhibits and “to tell the story of Vila Autódromo on its walls, through graffiti,” Venancio explained.

The team plans to build links between the “living” and virtual elements of the museum by interviewing residents about their memories of the physical space of Vila Autódromo and archiving videos of these interviews on the Evictions Museum’s YouTube channel. These interviews will be crucial to the plans to publish a book on Vila Autódromo, as well as for the goal to engage younger generations in the preservation of this history long into the future.

Another of the museum’s projects, referred to as “geolocalization online,” aims to reconstruct evicted or threatened communities by documenting and mapping their geospatial elements online. Venancio stated that with Vila Autódromo’s “physical territory… the road was already built, the houses were destroyed, the Olympic Center was already built, the hotel is there, and it’s unlikely we’ll see the Olympic Center demolished, the hotel demolished, and Vila Autódromo reclaim its physical space.” But virtual space offers a new opportunity, he argued: “Where something was removed, we will be able to, virtually, put these communities back in that space, not physically but virtually.”

The Evictions Museum has international ambitions. The museological plan stresses the importance of stimulating research on Vila Autódromo by academics around the world, growing the already considerable number of articles and dissertations on the community. Sandra Maria highlighted the museum’s relevance to global issues of rights, territory, and inequality, stating that Vila Autódromo’s struggles reflect an “international question, linked to the question of disputing land, which is the basis of capitalism.”

At the same time, the museum also has an urgent role to play closer to home, where the threat of eviction hangs over both the small community of Horto and the large favela of Rio das Pedras, among others. “The struggle has just begun,” stated Maria da Penha, another Vila Autódromo resident-activist playing a large role in the museum’s development. “Citizens, especially favela residents,” she continued, “have to have knowledge of the importance of demanding our rights.”

Penha concluded the event by imagining the powerful potential of the Evictions Museum: “My dream is that one day the museum will reach any community facing eviction and say: “Stop! There’s a museum of evictions, you will not evict me.'”