Rio de Janeiro’s City Council building was packed on Friday, October 6 as politicians and residents discussed Mayor Crivella’s plan to rebuild the community of Rio das Pedras, in the West Zone of Rio. Over one thousand people came from Rio das Pedras to participate in the public hearing: two viewing rooms were completely full and hundreds stood outside as the hearing was broadcast in the large public square of Cinelândia, in front of the City Council building. Residents from across the city also came to show their support and stand in solidarity.

With a population estimated to be much higher than the 2010 census figure of 63,484 residents, Rio das Pedras is one of Rio’s largest favelas and is the rare exception specifically mentioned in Crivella’s Strategic Plan. The plan called for the conclusion of a study on how to upgrade the community and for the provision of more housing by building 12-story apartment complexes through the Minha Casa Minha Vida public housing program. While the city and state are in economic crisis, Crivella has decided to forge ahead with his pricey project before the study has even been completed.

Community members are extremely displeased and have formed a commission to deal with the issues at hand and organize a resistance movement. Commission member and lifelong resident of Rio das Pedras, Fabiane Ferreira de Souza, broke down the main problem: “The community has existed for more than 50 years, and now our mayor has decided to evict us, he wants to kick us out. He wants to build houses through Minha Casa Minha Vida, and he wants us to pay for them. We already have our houses, and he wants us to buy through Minha Casa Minha Vida. They are buildings with 12 floors, there will have to be an elevator and it will be really expensive.”

To achieve the project goals, the city government plans to remove large swaths of the existing community, build high-rise apartment complexes, and use Minha Casa Minha Vida funding to finance the new apartments. As Ferreira de Souza mentioned, the monthly maintenance fees and bills would not be affordable for many current Rio das Pedras residents, essentially forcing them to move elsewhere. Many of the families in Rio das Pedras initially migrated from other parts of Brazil looking for opportunity and have been able to slowly build up lives for themselves in the bustling community; in this context, forced displacement, likely to regions located further away from employment opportunities, would be especially cruel. In the name of providing more affordable housing in Rio de Janeiro, Crivella is in fact turning to forced evictions and gentrification.

Many community members have begun to question the ulterior motives behind this hefty project. “Now, out of nowhere, comes the mayor, Marcelo Crivella, clearly with real estate speculation, to simply destroy Rio das Pedras. I think this is a campaign promise [to a donor]. He doesn’t have this right. He secretly visited our community, he didn’t talk to anyone. He brought with him several businessmen to get to know the community, at 8 or 9 o’clock at night, 4 or 6 o’clock in the morning. This created a lot of distrust from the community,” reflected commission member Evandro Teixeira Tavares, lifelong resident of Rio das Pedras.

Real estate speculation has historically been a common theme among many of Rio’s eviction cases, and residents have noted that Rio das Pedras is situated close to the condominium where Crivella lives, calling his project “social cleansing.” There is further suspicion over the fact that Rio das Pedras is named specifically in the Strategic Plan while details related to municipal policies in relation to other favelas have been left out. Teixeira Tavares noted that through a special program around 50 years ago, many of the families actually paid for their lots, suggesting at least some residents have documentation for their homes.

The process has lacked transparency and participation from the beginning. “One day [Crivella] called in half a dozen people, saying that they were representatives of the community. It’s a lie, where a community has more than 150,000 residents, that half a dozen people are going to represent us, going to speak for the people. He said that they all accepted the project. In reality, he didn’t ask anyone,” recalled Teixeira Tavares.

There are other problems. The proposal ignores the fact that it is currently illegal to build higher than two stories in the region of Rio das Pedras, a law Crivella is looking to change. Teixeira Tavares said the plan to replace a swath of the neighborhood comes only three years after State Water and Sewerage Company CEDAE spent R$65 million installing infrastructure to help drain areas that are prone to flooding and only two years after Light (Rio’s electricity utility) spent R$85 million to formally bring electricity to the houses. While residents noted that the flood protection equipment was never turned on, leaving the area vulnerable in times of heavy rain, Crivella’s project simply does not make sense. Instead of building on the development that has already taken place, Crivella plans to wipe the slate clean and start over. 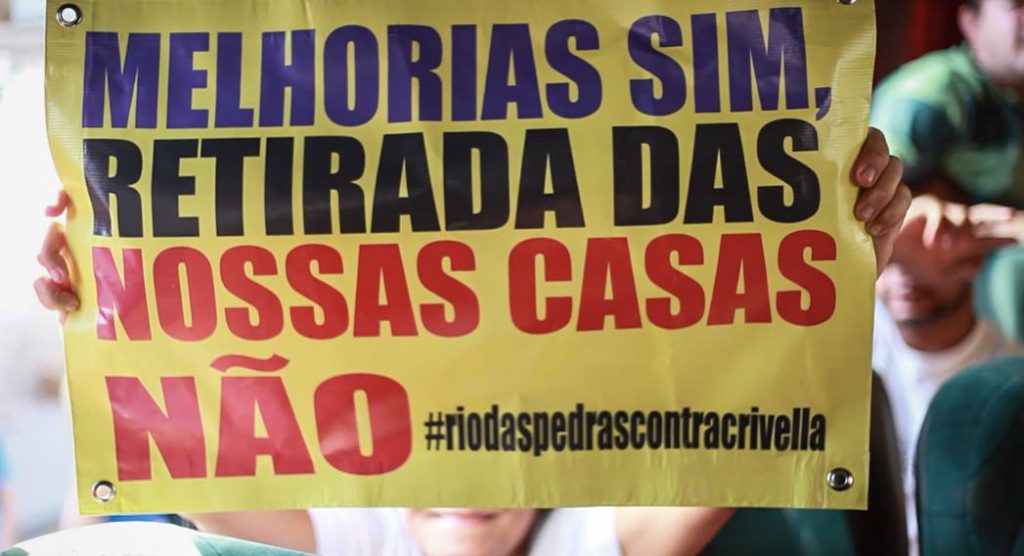 In spite of the powerful interests at play, Rio das Pedras residents have effectively organized a movement of families united in their intentions to resist. “We created a commission of 15 people from the community. We are holding meetings in the community, inviting the people. We are going after the city councilors, asking for help,” stated Ferreira de Souza. They have also attacked the official narrative, agreeing that there are ways to upgrade the community without destroying it: “Basic sanitation, infrastructure… we want the community to get better, we just don’t want to be removed.”

Unfortunately, amidst the news, the stress has taken a toll on some individuals, which is another common theme throughout stories of eviction. Already vulnerable people, some elderly or sick, are put at higher risk. “Three people have had heart attacks. [Crivella] says that he came to take care of the people, he is killing them. We want at least a little respect,” Teixeira Tavares insisted, questioning the consistency of the patronizing rhetoric surrounding Crivella’s policies.

The Mayor has a tough battle ahead of him. On Friday, the Rio das Pedras commission arranged for 21 buses to take residents to the public hearing. Residents have clearly demonstrated their resistance and are not backing down. As Teixeira Tavares stated, “we are more than them.”

Stay up to date with events in Rio das Pedras on Facebook and support the movement with the hashtag #RioDasPedrasContraCrivella.