This article is part of RioOnWatch’s #VoicesFromSocialMedia series which compiles perspectives posted on social media by favela residents and activists about events and societal themes that arise.

Following the death of a Civil Police officer on January 12 in Jacarezinho, in Rio de Janeiro’s North Zone, the Civil Police mobilized 31 police departments and agents from the Federal and (state) Military Police forces and has been carrying out daily operations in the favela and in neighboring communities to search for suspects. Civil Police helicopters fired while in motion, with high chances of missing their targets. On Thursday, January 18, after the joint force of 3,000 army troops acquired a general search and seizure warrant, 15 people were arrested on suspicion of involvement in the assassination. 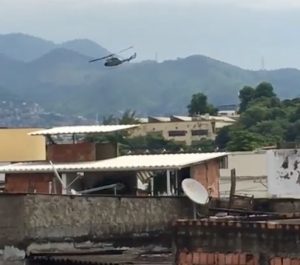 Defezap’s Facebook page announced that the app had received reports denouncing the operation, including the questionable way helicopters were employed, and had forwarded them to the relevant authorities. “Dozens of citizens have reported this practice, the majority of them women—mothers worried about their children playing on the streets, running a great risk of becoming victims to the gunfire,” DefeZap’s post said. As the post explained, this was not an isolated incident, and it is all the more worrying for having taken place in a densely populated area.

Michel Silva, a community reporter from Rocinha, questioned the massive investments made in public security policy, suggesting that the impact would be far greater if the money were instead invested in cultural programs led by residents. Recalling the military operations in Rocinha in September, Silva wrote:

Upon reflecting on Silva’s post, Coletivo Papo Reto participant Thainã de Medeiros questioned who is profiting from all this money. “If this investment continues to be made, someone is profiting. If all this money is being invested (in expensive ineffective operations), those who are selling weapons must be smiling.”

The Facebook page of the “No Tanks—Favelas For Life and Against Police Operations” campaign questioned the “war on drugs” waged against favela residents, who consequently cannot live their lives in peace. “It’s always the population that pays for the false ‘war against drugs.’ It’s a farce! We know that the real traffickers live in the big mansions in the South Zone. They are politicians and big business owners who buy the silence of the authorities, of the judges, etc.”

Community newspaper Fala Manguinhos posted multiple times to update residents of Manguinhos, a neighboring favela to Jacarezinho, on the operations which also extended into the communities of Parque Arará and Nelson Mandela.

In addition to the dangers of stray bullets and arbitrary actions and potential violence of police, Agência de Notícias das Favelas highlighted other damage such as ruptures to the grid, which the electric utility Light says can only be fixed when the security situation is stable again.

Léo Lima, a photographer from Jacarezinho, contrasted the dominant image in the media—of violence in the favela—with a video of children laughing and enjoying cinema in a street in the same favela (below). Lima reflected: “JACAREZINHO, THE MOST VIOLENT PLACE IN RIO. That’s what the newspapers and TV say. Without mirrors we believe and share [this perception] so many times it ends up becoming the only truth.” In contrast, the video shows a different side. The video was published on the Facebook page ‘Favela que me viu crescer’ (The favela that saw me grow up), a film produced by Cafuné na Laje about the favela and its history from the point of view of residents.