This is the first article in a four-part series on Internet access in favelas and urban peripheries in Brazil. For the entire original article in Portuguese by Escola de Jornalismo Énois and data_labe published by Nexo Jornal click here.

The Internet is increasingly essential to guarantee basic rights. But there are many favelas and peripheral areas that the Internet does not reach. We heard the stories of those who live with low connectivity in the largest cities in Brazil—and who improvise to stay online.

“Basta!” (Enough!) was the first of MC Martina‘s videos to “make a bit of a boom on the Internet,” as she herself put it. In the video, the rapper recites a poem in which she speaks of machismo, racism and the periphery. Consisting of one minute of uncut poetry, the video published in early 2017 reached 15,000 views. Martina barely managed to upload the video to Facebook. She didn’t have Internet access and had to use a friend’s connection. The video uploaded very slowly. It took time, but finally uploaded. In it, the MC questions how favela residents will empower themselves without access and dissemination of information. The video was the second most viewed of her career.

Until the age of 19, Sabrina Martina had never left Complexo do Alemão, in Rio de Janeiro’s North Zone. Today, the rapper, poet, and cultural producer appears on public television, travels throughout Brazil for shows, and has even gone abroad to participate in a debate. She is one of the organizers of the poetry slams in Casa Brota, a cultural space in Alemão, where people perform political poems from the periphery. But thanks to her Facebook page and the videos she records, her reach extends way beyond communities in Rio. Her releases have over 56,000 views.

Martina, however, does not have Internet access at home. To work, the MC has to borrow her neighbor’s wifi, which often does not work. It’s a challenge: the dissemination, recognition, and reach of her work depend on the Web. “If I didn’t have access to my neighbor’s Internet, my work would not have the reach it has today,” she says.

Martina is not alone. The disconnected reality in which she lives is very common in Brazil: 70 million people in the country do not have Internet access. This lack of connectivity affects both rural and urban areas and is experienced mainly by the poorest population. According to Household ICTs (Information and Communication Technologies) research conducted in 2015 by the Regional Center of Studies for the Development of the Information Society (Cetic.br), 85% of people in classes D and E do not have Internet access at home.

There are two main reasons for the inequality in Internet access in Brazil. The first is the one that keeps Martina disconnected: the price. In Brazil’s Southeast region, having a fixed connection with good speed—up to 10 Mb/s—costs on average R$99.32 (about US$30) per month, which represents 10.6% of the minimum wage. Of the people interviewed in the Household ICTs study in 2016, 54% of people who did not have Internet at home said the main reason was the high price of connecting.

The second reason is infrastructure. In many places, it’s no use having the money to pay the monthly fee: there simply is no Internet Service Provider in the area. The “lack of service availability” is the reason for the lack of connectivity for 28% of Brazilians who do not have Internet. “There are neighborhoods and regions that do not have providers,” explains Winston Oyadomari, coordinator of the Household ICTs study.

The problem principally affects residents of Brazil’s rural areas but is not restricted to them. There are connection deserts even in high density metropolitan areas within São Paulo and Rio, especially in favelas or suburbs. There are not even specific data on the connectivity of these neighborhoods.

In a context in which the Internet is increasingly essential for basic services—from registration for the Enem (National High School Examination, or SAT equivalent) to news consumption—it is not difficult to imagine the impact of the lack of connectivity on Brazil’s most vulnerable population.

Cetic’s 2015 Household ICTs study conducted interviews about Internet access with people from different classes. You can see their answers below: 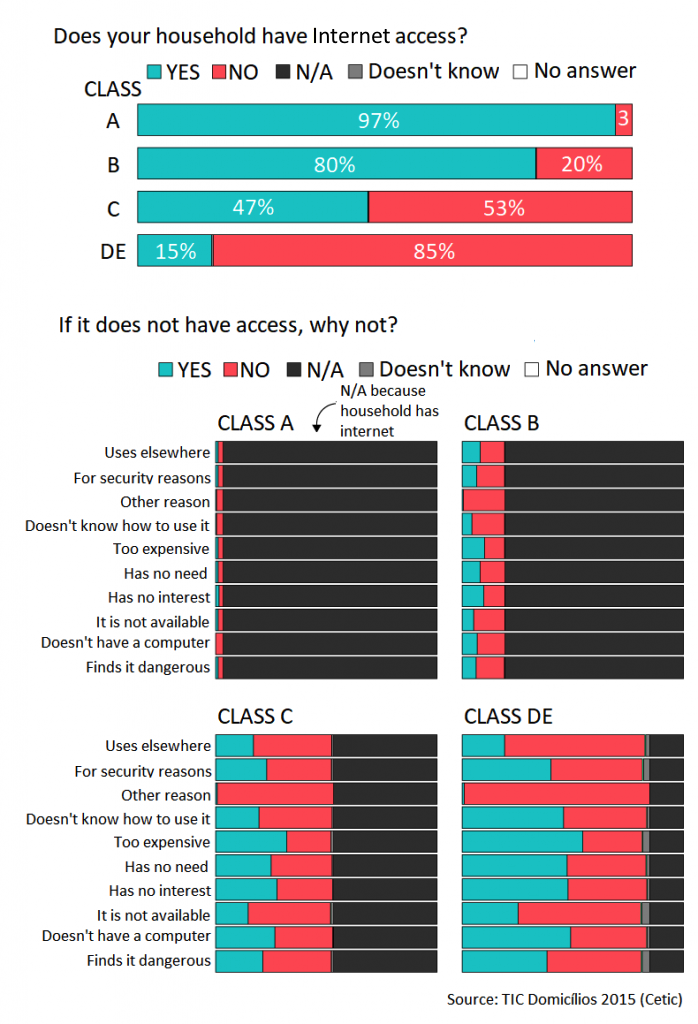 This is the first article in a four-part series on Internet access in favelas and urban peripheries in Brazil. For the entire original article in Portuguese by Escola de Jornalismo Énois and data_labe published by Nexo Jornal click here.