For the original article in Portuguese by Michel Silva published by Favela em Pauta click here.

There has been no investigation into the origins of the “suspect swimming pools in Maré,” featured on Rio de Janeiro newspaper Meia Hora‘s front page last Sunday (January 21). That is, the assumption made by the newspaper based on an old photo (above) of unknown authorship—that “traffickers had set up a play area for children in the middle of the street in Nova Holanda“—is, in addition to being irresponsible, lacking any basis in police investigations.

“Naturally there was an inquiry,” the Editor-in-Chief of Meia Hora, Henrique Feitas, told Favela em Pauta, about the newspaper’s front page. He also added that “the complaint is being investigated by the police authorities.” But that’s not what the Civil Police say. In a note sent to Favela em Pauta, police said that “agents of the unit learned about this complaint through the press and, as a result, will initiate an investigation to learn if this information is reliable.” This means that although the claim was made, the investigation had not yet begun.

The photograph was published for the first time on the Facebook page, “Favela Nova Holanda,” and is not recent (when is it from?). Favela em Pauta was unable to confirm who took the photo, and it appears Meia Hora couldn’t either, since the newspaper did not include a credit for the image. And the police didn’t know either, as the investigation into the case had not yet begun.

The Facebook page’s administrators commented on the episode of racism and class prejudice that spread across social media. “The newspapers that publish this kind of material could at least try to dig deeper into the information they convey to their readers, because what’s true is that the swimming pools were purchased by residents of our community,” they posted. 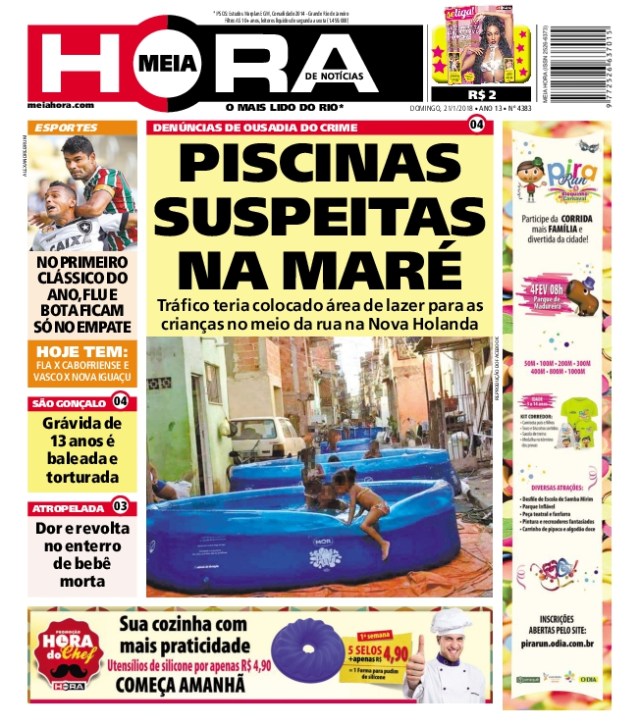 The front page generated a wave of criticism from favela residents about how the traditional press cover the lives of the millions of people who live in these areas.

Resident of Nova Holanda, Dieggo Lira, challenged the newspaper’s headline in a post on the Maré Vive Facebook page. “That second pool there is from my house and there wasn’t R$1 from traffickers, these shits have to get over their frustration that a poor person isn’t supposed to have a pool. We will have our pools, and if they keep talking I’ll buy a small water slide,” Lira joked.

The newspaper’s front page was replicated in an online article in the O Dia newspaper, which is part of the same media group. Following the negative repercussion, the article was edited and the name of the reporter who wrote the text, removed.

Henrique Freitas was also questioned about the lack of quotes from Maré residents in the article. He only said that residents were sought out to comment on the claim, but they did not give permission to include their statements for fear of retaliation. “In today’s edition there is a series of statements collected from social media by residents in support of the pools. And, in the same way we did Sunday’s edition, their identities are protected,” he concluded.

Despite the difficulty the editor claims to have encountered in trying to find residents willing to speak, many declared their opinions on the newspaper’s posts. Residents have come together to organize a piscinaço—a pool party—at Meia Hora, scheduled for Sunday, January 28, from 11am to 6pm in Lapa, as a form of repudiation of the Meia Hora front page. The protesters promise to set up plastic pools in front of the newspaper’s headquarters.

Responsibility of the press

One of the functions of the Syndicate of Professional Journalists of the Municipality of Rio de Janeiro (SJPMRJ) is to investigate complaints of errors and equivocations committed in the profession. Regarding questions about Meia Hora, the SJPMRJ said that the office “entered in contact with the Meia Hora newspaper, which denied having erred in its investigation. According to the vehicle’s leadership, the article was based on a complaint that is being investigated by the 21st Police Precinct. The newspaper also claims to have included, in the article, testimonies from residents published on social media. Besides this, the Meia Hora reporter avoids specific statements in the report, always using verbs in the infinitive [which obscures who is speaking or acting].”

The Ejesa Group (Empresa Jornalística Econômica S.A.) owns both the Meia Hora and O Dia newspapers. Known for being a police-supporting tabloid, Meia Hora has an investigation section and filters information from O Dia. Some years ago the newspaper had a section called “Communities” which was dedicated to publishing positive material about favelas, and which was closed during a crisis that almost shut down the newspaper. The Portuguese group Ongoing Strategy Investments owns less than 30% of the Ejesa Group, which is the constitutional limit for foreign ownership in Brazilian communication companies.