At the foot of Borel hill in Rio de Janeiro’s North Zone neighborhood of Tijuca lies the tight-knit and humble community of Indiana, a charming favela that has grown to house approximately 600 families since it was founded in 1957. At the bottom of an immense hill and with a small river bordering most of the community, the favela has been labeled an area of risk by the city government, which has attempted to evict the community on multiple occasions over the past eight years. Disputing the risk narrative as a basis for eviction threats, many residents believe it is real estate speculation that has driven the government to put relentless pressure on the community.

After a couple years of relative peace, residents report Indiana has just been slated again by the municipal government for complete removal. Residents Commission member Marcello Cláudio Nunes Deodoro told RioOnWatch this week that an appeal by the Rio Attorney General’s office to allow for the City to move forward in the removal of Indiana was accepted. While nothing is certain as of now, residents have been thrust back into a state of panic. The Commission is currently working with public defenders to fight the appeal and inform the community. Residents are also worried the City plans to work around its obligations to provide alternative housing in cases of removals, reporting that City officials are arguing residents were already offered public housing years ago.

In 2010, municipal government representatives visited Indiana, entering houses, taking pictures, and surveying the land. What some residents didn’t know then was that in 2009, and again in early 2010, the City had announced the complete removal of the community. Two years later, some 110 families were removed over the course of 2012. “In 2012, the city government came in force. The Municipal Housing Secretary exerted pressure to remove us from here,” Residents Commission member Inês Ferreira de Abreu Deodoro recalled. “It was really very complicated, it was really sad, very violent. To summarize the actions of the City in a few words I’d say: shaken mental health, heart attacks, deaths caused by stress, relationships disrupted, complete disharmony, the split in opinions in the community which the Municipal Housing Secretary himself planted here.”

At the time the mayor was Eduardo Paes and the Housing Secretary was Jorge Bittar. The eviction techniques they employed in Indiana mirrored their actions in favelas across the city. The government offered apartments in a Minha Casa Minha Vida public housing complex in Triagem, also in the North Zone, to anyone who willingly moved out. Some families accepted and several houses were destroyed. Indiana is tight-knit figuratively and literally; with the destruction of walls and foundations, neighboring house structures were weakened. Rubble was left behind. Rats, spiders, and other vermin proliferated. Inês Deodoro reflected: “For example, if a home on the ground floor was being destroyed, there were people living upstairs, there was a fridge upstairs, occupied houses. All of this is really strategic to disrupt the community, by the Municipal Housing Secretary.” 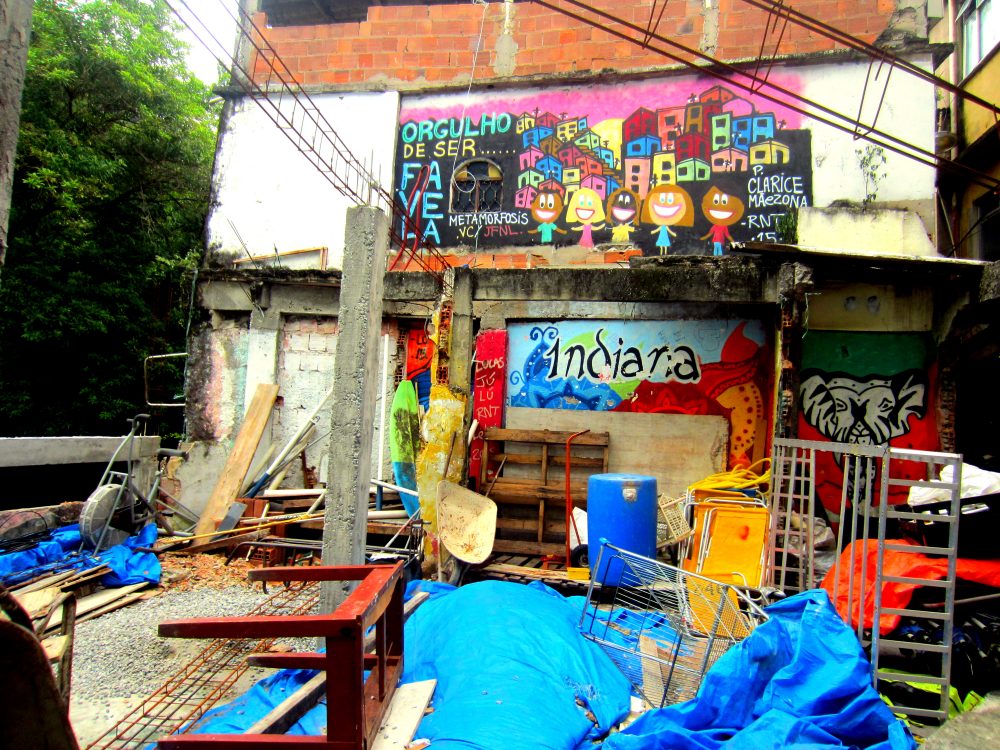 Some members of the community realized they needed to act. Viewing the chaos, Antônio Carlos Hipólito decided that he was going to seek help from the Pastoral das Favelas, an organization linked to the Catholic Church that has been integral in assisting communities in the fight against eviction. “Nobody knew what to do. I said to myself, ‘My God. I have lived half of my life on the street, the other half here in this community. If my wife hears of this, she will die.’ I spent three months trying to find this [Pastoral das Favelas] place. I had the wrong street name and wrong telephone number. I knew it was in Glória. When I arrived there, I said, ‘My God, where do I go?’ I got off the metro. Tripping, I almost hurt myself on the escalator.”

However, Hipólito eventually found the right place and a few days later the Residents Commission was created in Indiana to deal with the crisis. Within weeks the members were taking photos, documenting the government’s actions, working directly with the assigned public defender, and collaborating with other organizations. The government itself tried to destabilize the Commission by blaming the group’s resistance for the eviction process. The Commission even came under attack from some other residents, but was eventually successful in holding off that particular government project. Indiana was safe, for a while.

How the community pulled through such immense pressure and intimidation is an inspiration to many in the city-wide evictions resistance movement. Residents were pitted against each other, physical and emotional foundations were destroyed, yet they persisted. The Residents Commission sometimes clashed with the longer-established Neighborhood Association. Today, while they don’t always agree, they work towards the same goals. 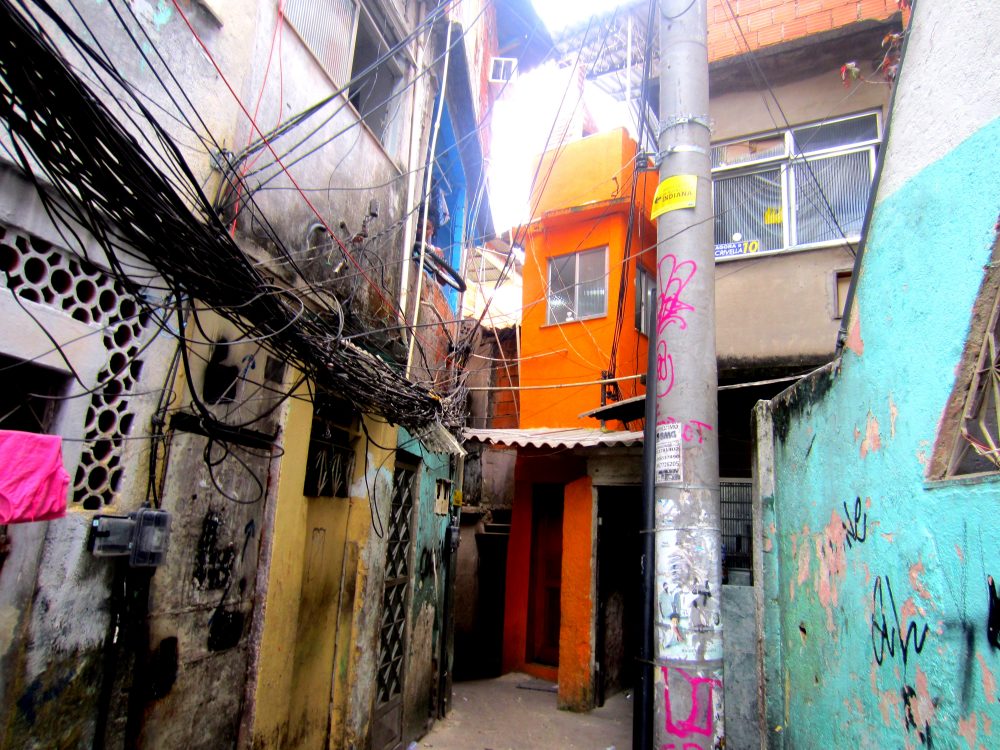 Three main strategic goals drive the Residents Commission’s work: resisting eviction threats, promoting internal improvements in the community, and demanding upgrades in Indiana with the regulation of public services. The group works toward these goals by informing residents about what is happening across Rio, specifically in regards to eviction, but touching all issues relevant to favelas.

The Commission hosts forums and talks, works with other organizations, provides services to residents, and acts as a watchdog. As of February 2018, the Commission has won three court cases against government efforts to move evictions forward and is waiting on one more currently in progress. In moments when threats towards Indiana quieted down, the Commission remained active anyway. “It is something to be studied, it is something the government needs to review. Does eviction really do good? To what point does it do good? To what point does isolating favela residents do good for the society?” Inês Deodoro asked. “Favelas make up part of the city, so upgrading is necessary, urgent, but it should be efficient, economical, humane, less aggressive. The Commission has this role of learning in blood, sweat, and tears.” 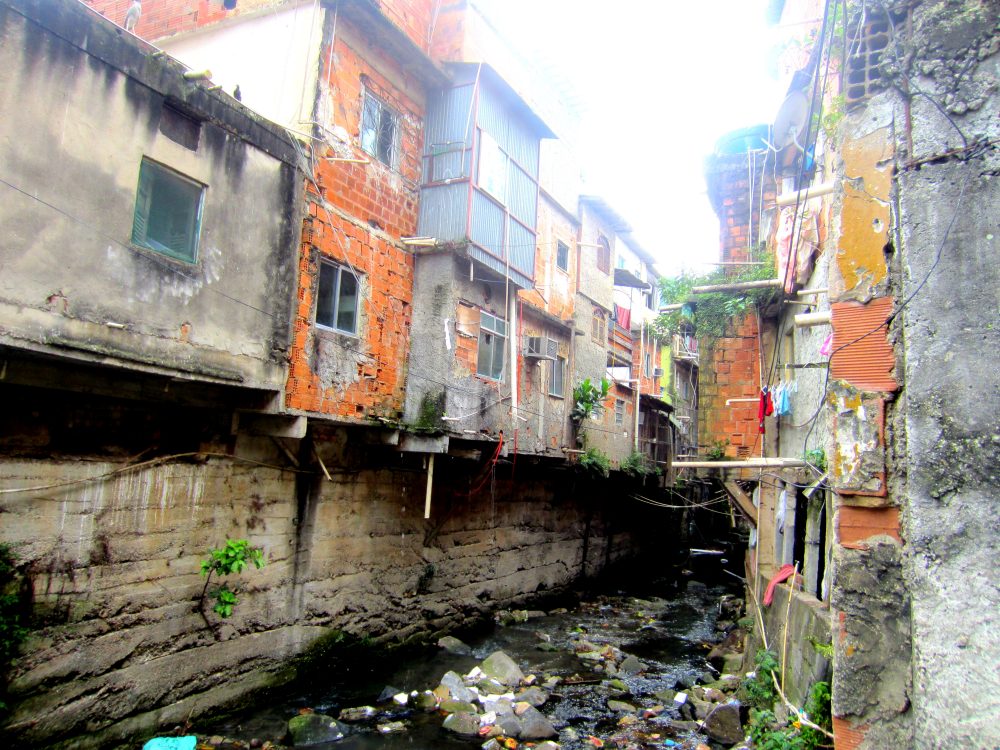 In 2009, then Municipal Housing Secretary Jorge Bittar stated: “What guarantees that the removal of Indiana will go ahead this time is that we have an abundance of resources.” Today, residents constantly remain weary about the threat of removal. Before the latest news about the City’s recent successful appeal, Hipólito stated: “I believe that this administration is doing the same thing [as the last administration, pushing for eviction], and hasn’t done more, to my understanding, [just] because they don’t have money, they don’t have resources.”

In January, Mayor Marcelo Crivella visited neighboring Borel, and the Residents Commission presented him with its demands, which largely pertain to the humane upgrading of the community without evictions. While Crivella’s visit was necessary and a positive step, residents say it must be accompanied by real community-led action. In fact, multiple government officials have visited Indiana in the past—in a speech there in 2013 then Mayor Eduardo Paes even publicly stated he had never called for Indiana’s removal—yet not many positive or concrete results have come from these encounters. “In reality, when we look a little more critically, upgrading for [the City] means eviction. The administration has changed again, the management has changed, but the housing plans come pre-made for the communities. The Municipal Housing Secretary doesn’t come and ask us how we want our housing,” stated Inês Deodoro.

Indeed, Crivella’s first year in office has been full of eviction threats, and although his administration has promised there will be no evictions, residents of threatened communities remain skeptical and alert. Many in the community believe there will be many more evictions as soon as the municipal government emerges from its financial crisis. The government’s Strategic Plan promises more than 14,000 houses in the Tijuca Massif region–an area that includes Indiana and Borel–will be removed in an attempt to ensure safety for Rio residents, which may serve as justification for a broad evictions campaign. 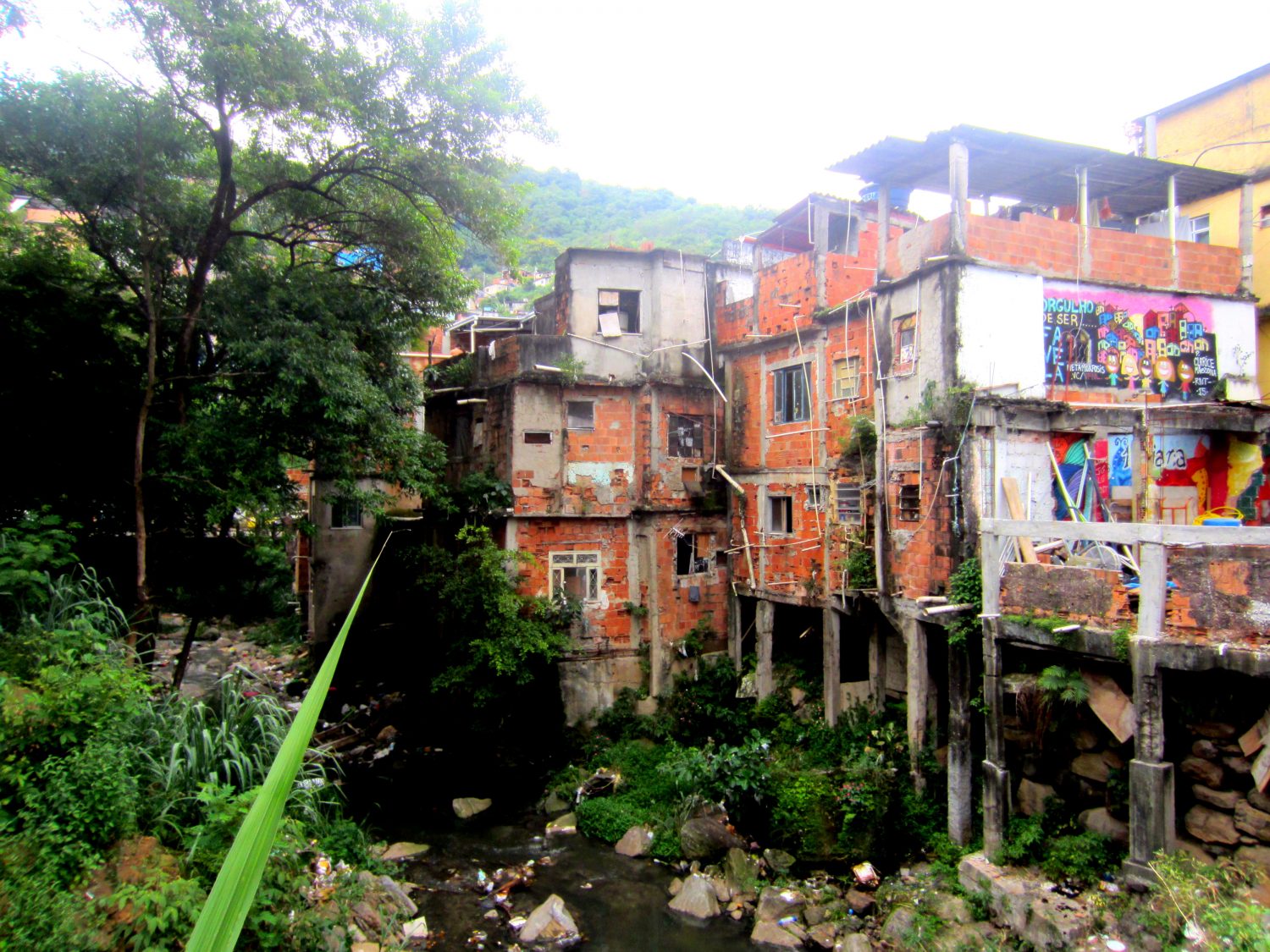 The threat is there, but residents of Indiana are ready, knowledgeable about the threat and the government’s potential justifications, organized and experienced. Along with communities much newer to eviction threats, they constitute part of the united Parliamentary Front Against Evictions formed last November. Many other communities have copied the actions taken by the Commission and have been successful in fighting off or delaying eviction, and the movement as a whole is stronger because of its example. As Hipólito put it, “We will win. We will win.”

The community plans to hold an open forum at the Fundação São Joaquim in Tijuca on April 12 at 6pm. The Commission has invited Mayor Crivella and various other Rio politicians in an attempt to create a positive and proactive discussion on the problems facing Indiana and other communities around the metropolitan region. All are invited. 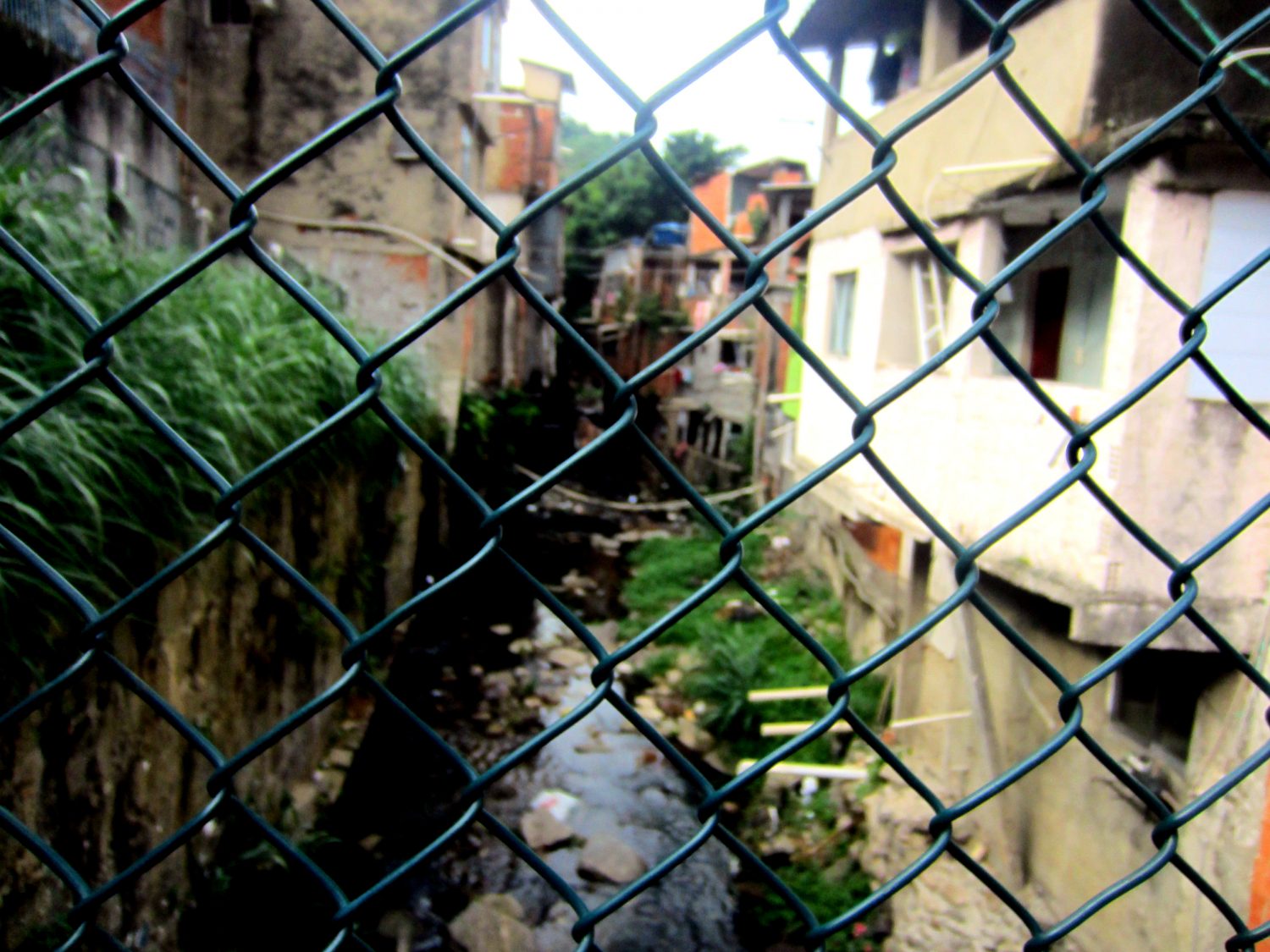