This article is part of RioOnWatch’s #VoicesFromSocialMedia series which compiles perspectives posted on social media by favela residents and activists about events and societal themes that arise. It is the second in our special series on social media reactions to the federal military intervention in Rio de Janeiro.

Yesterday evening, March 15, cries for justice and police reform echoed throughout downtown Rio de Janeiro’s State Legislative Assembly building as Rio mourned the deaths of City Council Member Marielle Franco and driver Anderson Pedro Gomes, assassinated fewer than 24 hours earlier. Helicopters buzzed overhead and Shock Troop battalions stood by as thousands of protesters gathered from throughout the city, chanting: “It isn’t over, it must end, I want the end of the Military Police,” and “for Marielle, I say no, I say no to [military] intervention.” Dozens of protests were simultaneously taking place across Brazil, with protests also being planned in New York, London and around the world.

At around 6:30pm, the massive crowd began to march north to the historic Candelária church, embracing, crying, yelling. “Marielle, presente!” they proclaimed: Marielle is with us.

Franco’s death united people from across Rio in solidarity, but it was the city’s favelas that grieved most. Born and raised in the Complexo da Maré favelas, the 38-year-old sociologist and teacher was the City Council’s only black woman. For many, she was a champion for the city’s most vulnerable.

In February, the City Council named Franco leader of a special commission to monitor the federal government’s military intervention. Prior to her nomination she had been using her position to speak out against police violence, condemning abuse in Rio’s favelas. Concerned such abuse would worsen amid President Michel Temer‘s declaration of military intervention in Rio, Franco raised her voice further.

In one of her final tweets, Franco denounced the recent killing of Matheus Melo, a 23-year-old from the Manguinhos favela in the North Zone, shot by police on his way home from church on March 13. “Another youth homicide that could be credited to the Military Police. Matheus Melo was leaving church. How many others will have to die for this war to end?” she asked.

Last weekend, on March 10, Franco publicly decried police violence in the favela of Acari. Calling out the state Military Police’s most lethal battalion, the 41st, she wrote: “What is happening in Acari is absurd! And this has been happening all along! The 41st Military Police Battalion is known as the Battalion of Death. Enough of trampling our people! Enough of killing our youth!”

As details of her killing emerged, it became clear that her death was a deliberate assassination. Investigators later determined her attackers had followed her car for around four kilometers. A cartoon by illustrator Carlos Latuff soon began circulating across Facebook, drawing a trajectory of retaliation from her to comments on police abuse to her assassination: “February 28, Councilwoman Marielle Franco (PSOL-RJ) named head of commission that will monitor intervention in RJ; March 10, Marielle denounces police violence in Acari; March 14, Marielle is shot to death in execution.” 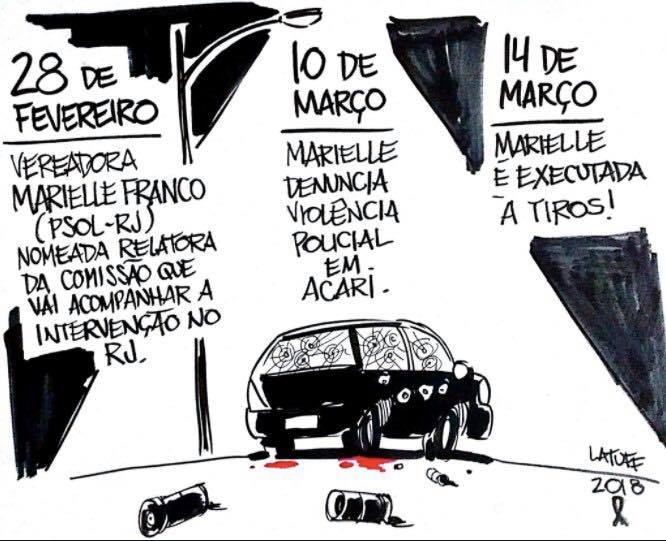 Groups from both Manguinhos and Acari favelas paid tribute, recognizing the sacrifice Franco had made and remembering her support for their communities.

The Mothers of Manguinhos group of mothers who have lost children to police violence in Manguinhos declared: “We will continue RESISTING for us and for you, MARIELLE FRANCO!! MARIELLE IS WITH US, NOW AND FOREVER!! You will be forever in the heart and in the STRUGGLE of the MOTHERS of MANGUINHOS and of ALL mothers!!” 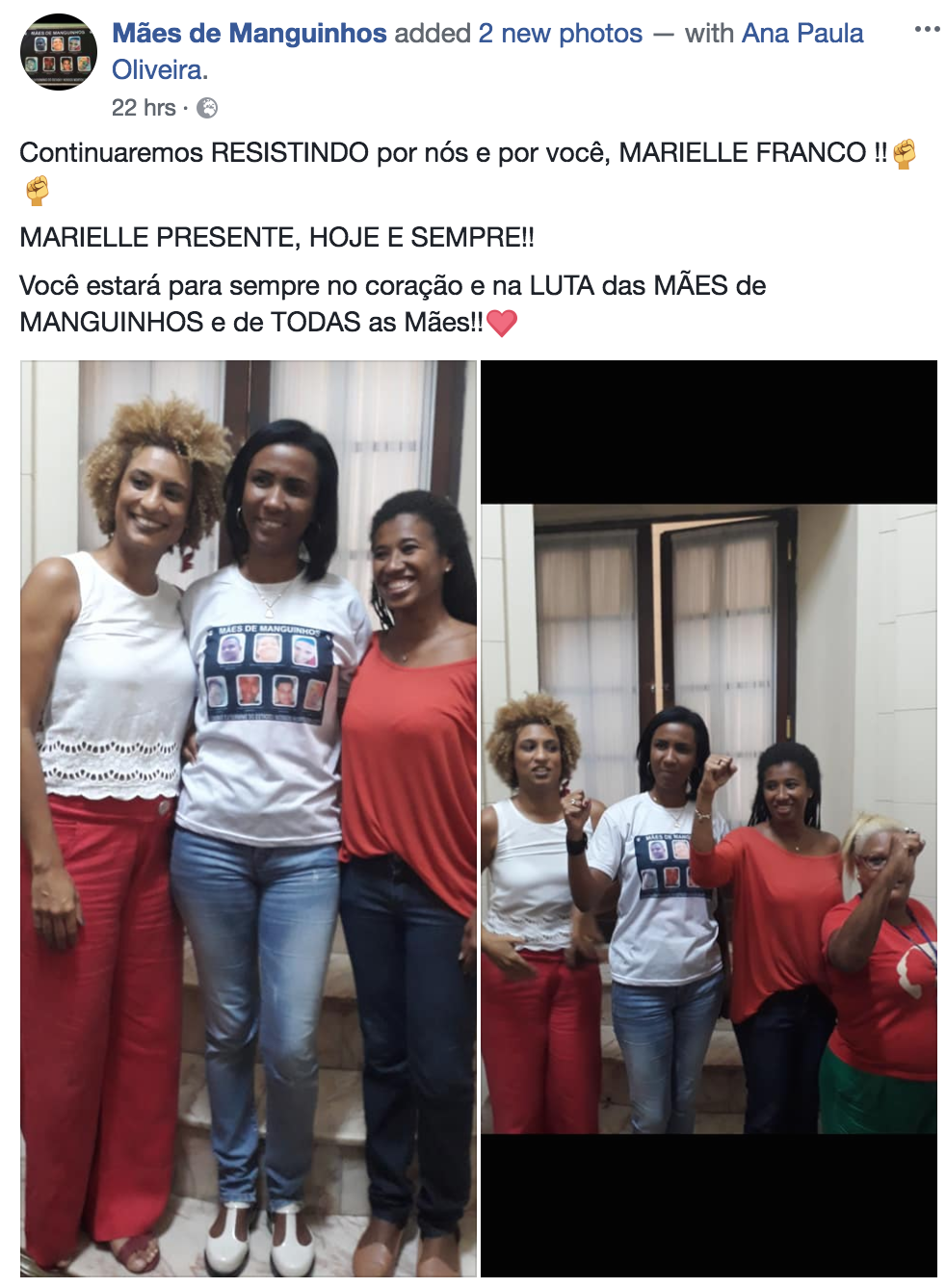 The human rights collective Fala Acari held the state responsible for the murder of Franco, writing:

“Marielle Franco was a black woman from the favela who, like so many of us, was EXECUTED BY THE STATE. No, we are not affirming here that it was battalion X or Y, but we are saying that, just as in other areas of Brazil with violence statistics much higher than Rio de Janeiro, if the state is in the situation that it currently is, nobody is more guilty than the state in this death. Marielle Franco was helping Fala Acari last week to publicly denounce what the Acari favela was suffering through at the hands of the armed branch of the state, but specifically the Military Police 41st Battalion, or 41BPM, and even this weekend, the O Dia newspaper published material in which she spoke about what has been happening in our favela for A LONG TIME. This woman was part of the fight AGAINST THE OPPRESSION OF BLACK AND FAVELA PEOPLE and very probably was killed in such a violent way. We offer solidarity to family members and friends of Marielle Franco and of Anderson and continue to say: #TheyWillNotSilenceUS #OurDeadHaveAVoice #MurdererState #BlackLivesMatter #FavelaLivesMatter”

Activists and NGOs throughout the Complexo da Maré’s 16 favelas mourned Franco’s death and urged Maré to continue her legacy. Recalling her ubuntu-influenced campaign slogan, “I am because we are,” activist group Amarévê wrote “I AM BECAUSE WE ARE. WOMAN, Maré will continue your battle. We will not be silenced. Marielle is with us.” 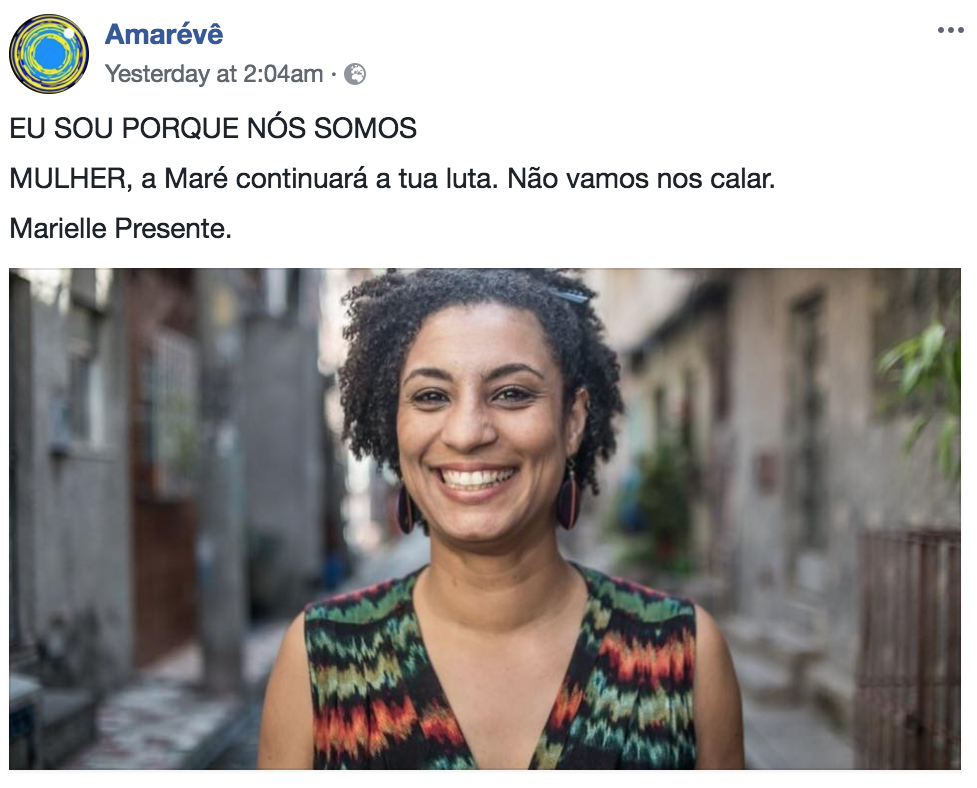 Community media collective Maré Vive condemned the attack and called for solidarity among Maré residents, posting: “It’s true. Marielle Franco, raised in Maré, black, woman, our great longtime friend and councilwoman, was shot to death. Murder. Political Crime. Cowardice without end. Mari lives. And she will live! We will continue her fight and it will be greater with each passing day. That is all we can say in this painful moment. We ask for prayers and positive energy for family and friends. I am because we are.” 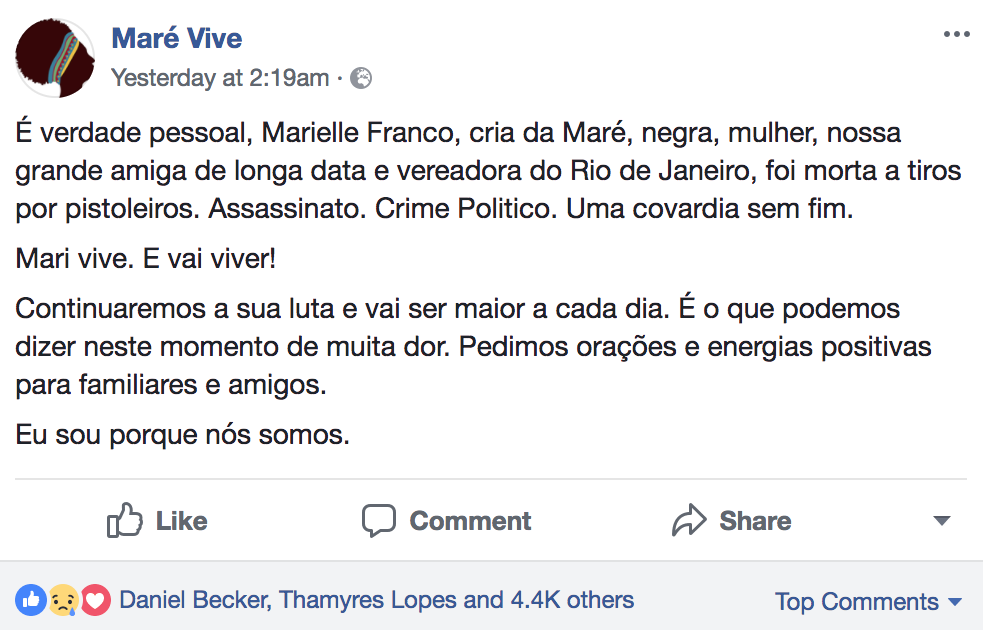 “MARIELLE IS WITH US. Justice! It is with great weight and indignation that we received the news of the murder of Councilwoman Marielle Franco last night. A woman, black, from the favelas, and tireless defender of human rights, she always dreamed of and fought for a more just and equal world. A complete world, one of rights.

A dream built in the Maré favela and which won over the city on being shared with the more than 46,000 Rio residents that elected her councilwoman. In and out of the council, in the short span that she exercised her mandate, Marielle embraced the cause of all those who have had their rights violated in the favelas and peripheries of our city. Never without her determined smile, she never tired of the struggle.

This brutal assassination is one more attempt to intimidate and silence the voices of those who, like her, believe that it is possible to build a society that respects people and their differences, that stands in solidarity, open and free of prejudice. This is an attempt in vain, to be sure.

We will not accept the possible impunity of the authors of this barbarity. The State must act with speed and rigor in search of the guilty. And we must participate, amplify, and potentialize the acts in solidarity with Marielle and build a great, strong protest to guarantee investigation. We have surpassed all limits. The shots that took her life reached, once again, all of us and our democracy.

In this way, the Maré Development Networks, the Favelas Observatory, and the Maria e João Aleixo Institute stand in solidarity with the family and friends of Marielle and invite the entire population to take to the streets, participating and developing acts, mobilizing and articulating forces in search of a fraternal, equal, democratic world with complete respect for human rights. We also stand in solidarity with the family and friends of Franco’s driver, Anderson Pedro Gomes, another victim of this cowardly and cruel act. Anderson, father to a two-year-old son, will also be forever remembered, as will his memory, the motive for which we will continue fighting with force and determination.

We will not go on in vain. Never! The death of Councilwoman Marielle Franco is an irreparable loss. But her example, her dedication, happiness, and strength inspire us to continue the arduous work of building a better world. We will continue—together—onward.”

“Eu sou porque nós somos.” I am because we are. #MariellePresente