For the original article in Portuguese by Marina Lang published by UOL Notícias on March 2, 2018, click here.

One of the biggest concerns of administrative assistant Angélica Moraes, 36, regarding this period of federal intervention in Rio de Janeiro’s security is with the young army corporals and soldiers who live in favelas. Just on the road she lives on in Complexo do Chapadão, in Rio’s North Zone, two of her neighbors are young men from the lower levels of the army.

“These days, one of our big worries is this: are these young people going to come into the communities they live in to fight drug trafficking? There’s a soldier here in my street who is so afraid that if [the army] comes here he’ll face repercussions from the traffickers. If he has to flee, where will he go? Is the next community safe for him? We don’t know, we have no way to prepare ourselves,” she says.

Although the new head of security and ‘Intervener,’ General Walter Souza Braga Netto, said in late February that there would be no permanent occupations of communities, residents fear violations and abuses will happen. The favelas, they say, are scared precisely because they lack information about what is about to happen during this intervention, which is scheduled to end in December.

Concerned, leaders of various favelas in Rio are mobilizing to question or even try to revoke the federal intervention. The main lines of action include the following measures:

Cristiano de Oliveira Melo, resident of the Tavares Bastos favela, in Catete in Rio’s South Zone, is one of the leaders of the Community Union, an organization which unites residents from a range of Rio favelas. He calls for dialogue with those in charge of the intervention.

José Mario Hilario dos Santos, resident of Santa Marta in Botafogo in Rio’s South Zone and another member of the Community Union, agrees.

“A resident leaves home for work at 6am, comes back in the evening and finds their house ransacked. The army says it’s not responsible. Who is responsible then? Who are we going to turn to?” he asks. Both say they are in favor of intervention but worry about the abuses of power that could happen.

The leader from Tavares Bastos says he sent a message to Governor Luiz Fernando Pezão to request a meeting with the Intervener. However, as of early March, he still hadn’t received a response.

“In the past, if we had a problem, we held Pezão responsible. We had a meeting with the Secretary and we were heard. Now, we want to know how our communities will be heard, because these are generals and totally different levels now,” states Melo.

Through its press office, Rio’s state government said that the Intervener would be the one to respond about a possible meeting with community leaders.

Questioned about the possibility of opening dialogue between the Intervener and favela leaders, the Federal Intervention Cabinet (Gabinete da Intervenção Federal—GIF) responded that “the federal Intervener has already stated that he counts on the support of Rio’s population to achieve the federal intervention’s objectives.”

Regarding the possibility of creating channels for reporting abuses during operations, the GIF stated that “the Armed Forces have open channels and ombudsmen accessible to the public”—without specifying, however, what those are.

On the other hand, there are favela residents that refuse to interact or dialogue with the military officials now in command of Rio’s security. The NGO Redes de Desenvolvimento da Maré (Maré Development Networks) stated it will ask the Federal Public Prosecutor’s Office to move to revoke the military intervention.

“Redes da Maré refuses to dialogue with the Intervener, we will not legitimize this authority. Together with the Public Prosecutor’s Office, we will file for the repeal of the intervention,” coordinator Lidiane Malanquini affirmed.

In response to that initiative, the GIF countered that the federal intervention was declared by decree by the President of the Republic. 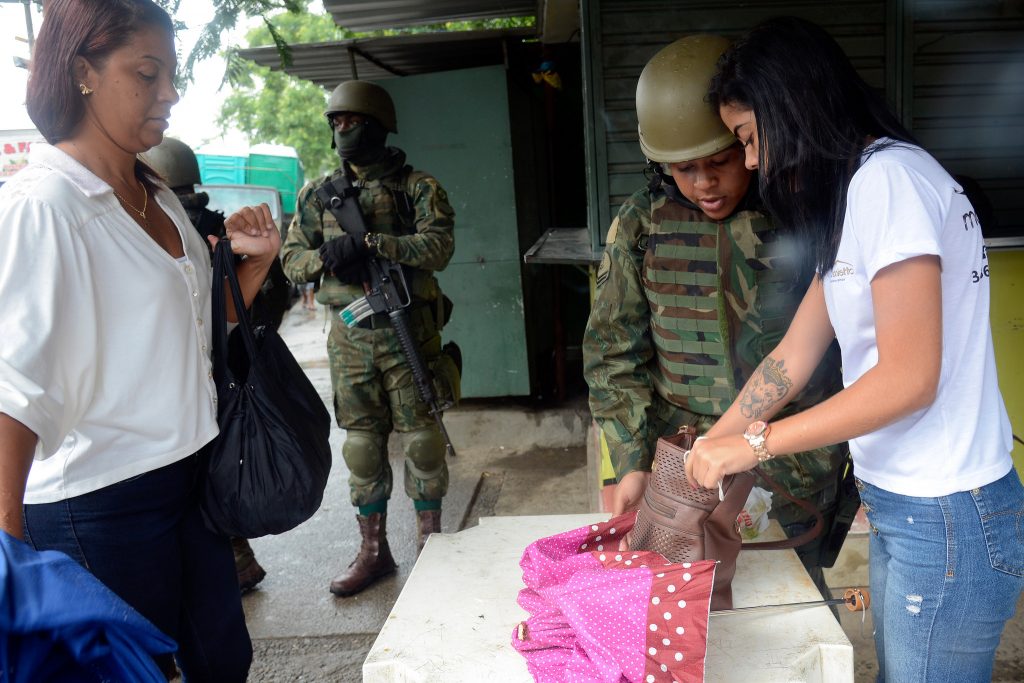 Safety Guidelines and the ‘Truth Commission’

The Federation of Favela Resident Associations of the State of Rio de Janeiro (FAFERJ), in turn, has opted to create a People’s Truth Commission—alluding to the National Truth Commission created in 2011 to investigate violations during the dictatorship—to investigate recent military crimes. One example is the case of Lieutenant Vinícius Ghidetti de Moraes Andrade who was accused of leading a group of military soldiers that handed over three young men from Providência (in Centro) to traffickers from Mineira (North Zone) in 2008. The men were tortured and murdered by the criminals.

“This People’s Truth Commission is for us to be able to monitor human rights violations carried out exclusively by the military,” the General Secretary of FAFERJ, Filipe dos Anjos, stated. The formation of the group was announced on Tuesday, February 27.

According to dos Anjos, crimes have been committed on other occasions involving military actions in Rio. “It’s these cases that we want to see investigated,” he said.

The Rio branch of the Brazilian Bar Association (OAB-RJ) confirmed to UOL that it is observing FAFERJ’s work to monitor possible human rights violations, but added that while it is aware of the initiative, it has no formal involvement with the People’s Truth Commission, which is an independent initiative by favela residents.

Regarding the proposal, the Intervention Cabinet stated that “the actions of the Armed Forces in the Guarantee of Law and Order [operations] have always been guided by principles of legality and respect for citizens.”

FAFERJ has also set up working groups (legal counsel, intervention planning, black youth, and others) to discuss and question the intervention together with residents.

Other initiatives aimed at monitoring military actions in Rio are also underway. “An intervention observatory will be launched… to see how civil society can organize itself in response to the intervention. It’s an initiative of the Center for Security and Citizen Studies (CESeC) from the Cândido Mendes University,” the coordinator of Redes da Maré stated.

FAFERJ is creating a safety guidelines flyer which will offer advice on how to act if stopped or approached by the Armed Forces during an operation.

After the intervention was announced, a video made by three black activists with recommendations about how to behave when approached by security forces went viral on social media.

During the February 23 military operation in Vila Kennedy, in Rio’s West Zone, soldiers photographed residents with their IDs in order to check for criminal backgrounds. This method caused an uproar.

Dos Anjos, who lives in Santo Amaro in the South Zone, finds it difficult to obtain information about the intervention or to disseminate specific guidance to residents. “The information is confusing, we still don’t have clear details. Without planning, it just produces a lot of noise,” he criticized.