Initiative: Hadasha’s Workshop (Ateliê do Hadasha)
Contact: Facebook | Email
Year Founded: 2010
Community: Complexo de Manguinhos, North Zone
Mission: To (1) Educate young people through music and the creation of musical instruments from recyclable materials; (2) Make art not only a platform of knowledge but of improving people’s lives; (3) Use percussion classes to promote the capacity of young people, thus creating alternative types of social inclusion through art; (4) improve participants’ relationships in school and with family; (5) work with the economic solidarity movement; (6) support sustainability and environmental preservation; (7) and transform waste into wealth, joy, and new life perspectives.
Public Events: Ateliê do Hadasha sells its drums and music in markets across Rio, including the Solidarity Economy markets; partners with arts-based organizations across the city; and offers a number of music and arts classes at its headquarters in the Workers’ House of Manguinhos.

The story of Rio de Janeiro cannot be told without music. From samba, Bossa Nova and choro to Brazil’s modern funk and dance forms such as passinho, the city’s history and culture have always produced an ample soundtrack with the potential to transform its listeners and musicians alike. Perhaps nobody knows this better than Guilherme Hadasha, a musician and teacher who has spent more than two decades on his mission of achieving “music for all,” working to ensure that the arts reach low-income areas across Rio. A native of Leblon, in Rio’s South Zone, Hadasha moved to the city’s North Zone at a young age and joined the military at 18, but he studied and practiced music throughout his adult life as well. Over time, he says, “the arts called me more strongly.”

Hadasha studied classical music in university and plays a number of instruments, including alto saxophone and classical guitar, but he has always returned to percussion, saying he was drawn to “the language of the drum, that was born in Carnival.” In 1994, Hadasha began his first “music for all” initiative and he has worked to develop various projects based on outreach via music and the arts across Rio in the years since. He has partnered with institutions as large as Rio’s Pontifical Catholic University (PUC) and the Oswaldo Cruz Foundation (Fiocruz), as well as with community-based organizations in favelas across the city. And his outreach has ranged from working with dancers at Rio’s Municipal Theater on a performance that combined classical and popular musical genres to a transcription project that focused on the influence of Afro-Brazilian music. 2010 saw the birth of Hadasha’s Workshop, or Ateliê do Hadasha, in the North Zone favela of Manguinhos, a community with its own history of musical influence. 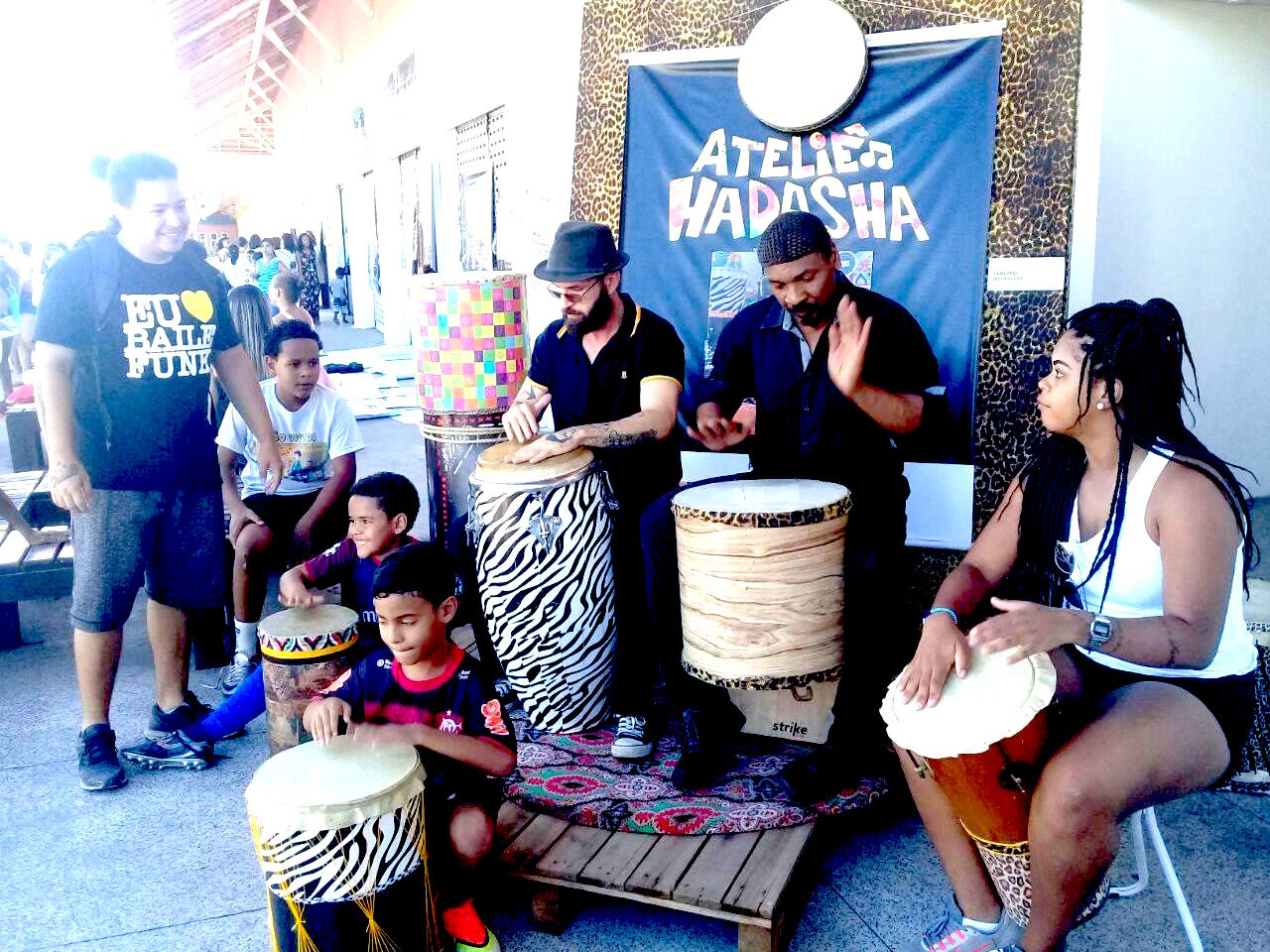 Along with a small team that includes his son and fellow musician and teacher, Jefferson, Hadasha runs the project out of Manguinhos’ “Workers’ House,” a municipal building intended to provide services to residents seeking training and support in applying for jobs. The building resonates with the bass of percussion, intermittent piano progressions, and constant movement of people and of sound. Hadasha’s workshop includes everything from musical groups to theater troupes and ballet classes. It is a “cultural school,” with the core belief that “art does not have color”—that art should be open to all. 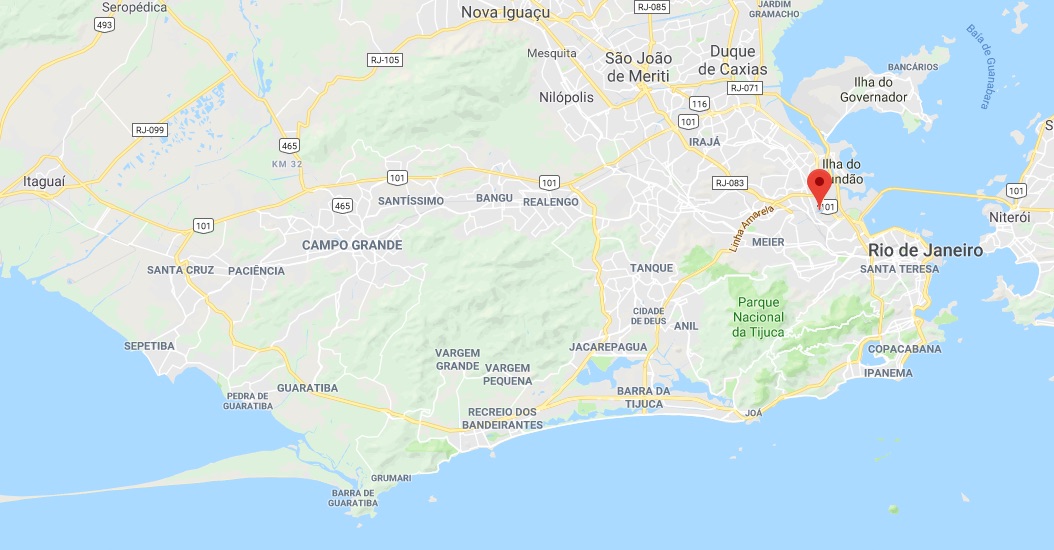 From his office, Hadasha presents examples of the instruments used to teach students. These handmade drums line his shelves, and despite coming in different sizes and shapes, they have one thing in common. Hadasha’s workshop constructs all of its drums from recyclable materials: glass, metal, plastic, leather, paper. They even repurpose the tops, spigot and all, of gallon-sized plastic water jugs. The entire project is local, too: businesses donate these materials, and once a week Hadasha’s students come to his workshop to learn how to build their own drums from scratch. Not only do they learn how to make music from literally start to finish, they also learn how to sell their handicrafts in local markets, such as Rio’s monthly solidarity economy market (EcoSol). The workshop’s instruments are not expensive, but, Hadasha says with a wide smile, the children who make and use them “are delighted.” With their own hands, they are creating their own “symphony.” 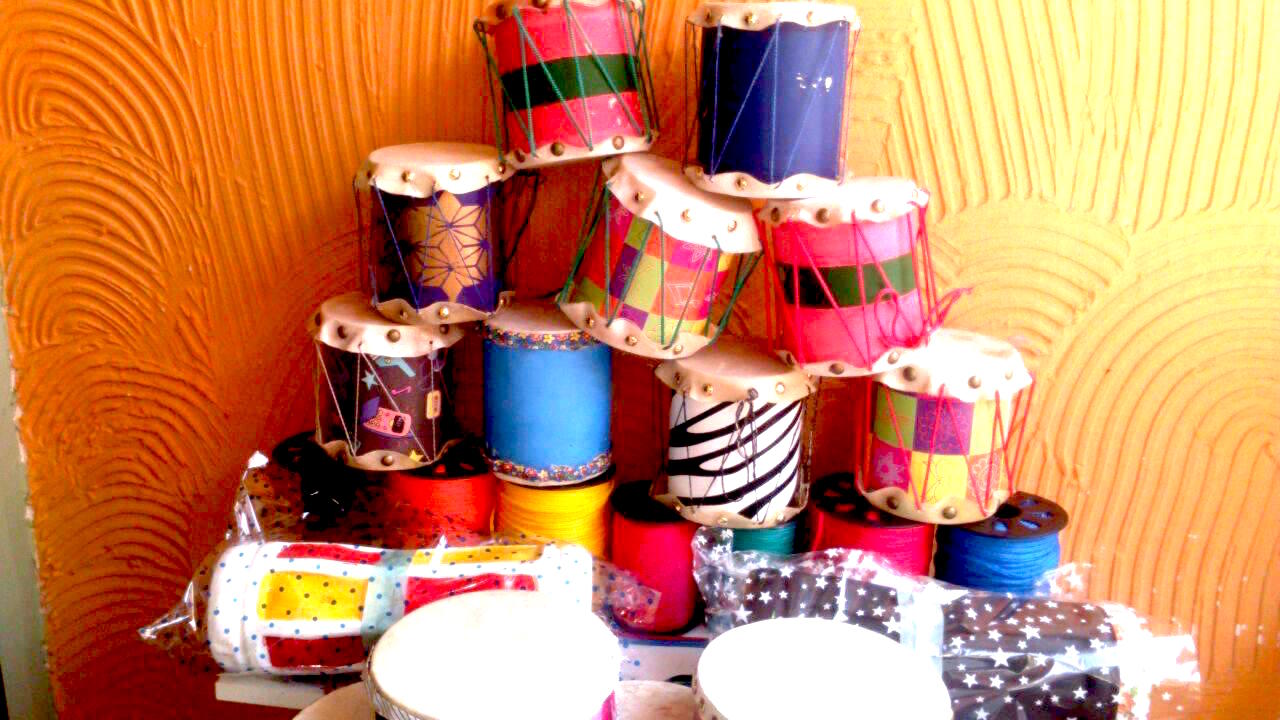 Through making instruments, recording music, and collaborating with local networks, Hadasha’s workshop manages to “sell the fruits of its social project.” These “fruits” come from a belief that, as Hadasha explains, “Music is practice. It has to excite, it has to make people dream… So we find a way [to teach] and we don’t necessarily expect that [our students] read quickly. Just that they play and fall in love with music.” The “great charm” of the work, he says, is the “exchange—the learning.” By “selling the fruits” that they grow, Hadasha believes his initiative provides “a house of talent and of open doors: a platform.”

Innovation often comes from necessity. While Hadasha tried working with instruments like guitar and piano in his projects, he found it financially impossible to continue doing so. Access to instruments in many low-income communities is limited: “There are those who have never seen a piano… never heard the actual sound of a piano… I had a student who told me that I was rich because my saxophone is made of gold.” Lacking reliable delivery of public services—Hadasha points to the prevalence of trash in the streets and the failings of municipal sanitation services—environmental education is hard to come by. But with his “alternative music,” Hadasha believes in promoting conversations that go beyond music: his workshop has the potential to encourage its participants to rethink the meaning of waste and to value materials that Manguinhos itself produces.

Combining questions of art and environmentalism allows Hadasha to respond to multiple issues facing Manguinhos, but he recognizes that there is much more to the community. His workshop includes partnerships with psychologists and legal advisers, in addition to its physical proximity to employment support and training. An integral part of this broader mission is involving all of Manguinhos in the initiative, and not only children and youth. So, in 2016, Ateliê do Hadasha added the Mangrove Flower Chorus, or Coral Flor do Mangue, a musical initiative comprised of the mothers and grandmothers of children participating in other workshop projects. As Hadasha explains, many of the families in Manguinhos have had to survive a great deal of violence, at times leading to depression among parents and grandparents. To combat this, the project provides an outlet for adults to become engaged in the arts, and not with classical or “old” music, but, in Hadasha’s words, with “young,” fun, music like hip-hop. In this way, the new initiative promotes a mission “of life, of health.” 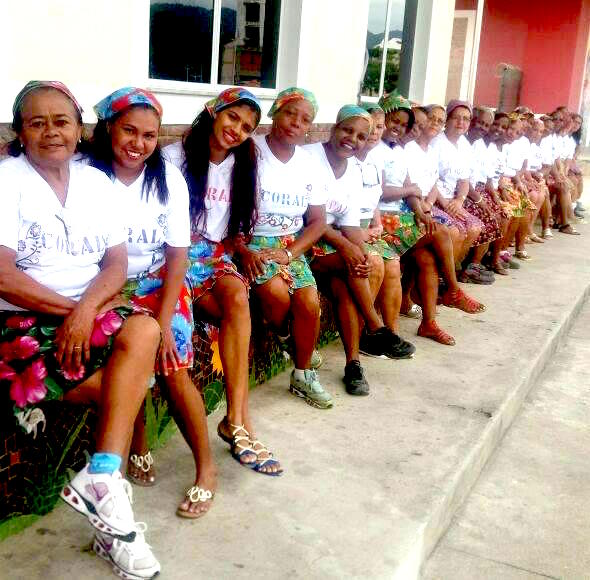 Despite the challenges that Manguinhos faces, Hadasha believes that his workshop has developed a method of partnering with local organizations, taking advantage of institutional support where possible, and maintaining solidarity and independence regardless of institution, politics, or religion. For these reasons, “We believe that we are capable of constructing a solid foundation.” With this foundation, Hadasha says, “We will continue.”

*Ateliê do Hadasha is one of over 100 community projects mapped by Catalytic Communities (CatComm), the organization that publishes RioOnWatch, as part of our parallel ‘Sustainable Favela Network‘ program launched in 2017 to recognize, support, strengthen, and expand on the sustainable qualities and community movements inherent to Rio de Janeiro’s favela communities.