Over 250 kilos of fish, endless boxes full of fireworks, and white and red roses. The reason for this majestic party? The festivities of April 23 in Rocinha, the day on which Saint George is celebrated. For the Catholic Church Saint George is the Warrior Saint and for Umbanda he is Ogum, and therefore a kind of patron saint for all in the city of Rio de Janeiro. This year, the celebration took place for the sixth time in the community.

The festivities began at around 5am with a fireworks display, announcing a series of activities that would fill the day. The devotees concentrated in the Cidade Nova area at the Badalo Stage (Palco do Badalo) from 9:30am onwards to accompany the arrival of the procession, which had begun from Rua 1 bearing the image of the saint. For lunch, ten people assembled an impromptu kitchen, working at full steam to make sure everything was ready on time.

Alex da Peixaria, one of the organizers of the event, has lived in the favela for 22 years and has always believed in the soldier who won the fight against the dragon. “It’s a thank you to these people. I arrived in Rocinha with nothing, and I have been able to accomplish something small here, thank God. I feel obliged to give back,” says Alex, who emphasizes that he does not organize the celebration due to any promise made. “It really is a real pleasure.”

And it was observing his father that Thiago, Alex’s son, became a devotee. “The whole week was about preparing the festivities,” he said, in one of the few moments he was able to stand still and take note of what was needed. “We feel accomplished, you know? We take pleasure in doing this and the community needs it.”

For Friar Sandro, parish priest of the Nossa Senhora da Boa Viagem Church—located on the Estrada da Gávea, the main road to access the community—the celebration of the Mass is important because it revives actions that have already been part of the region’s culture. “Lately we’ve had difficulties because of the conflicts in the community. We prayed the rosary every Monday, in the month of May we had Mass.” The celebration also offers an opportunity for residents to come together, and demonstrates the syncretism the saint represents. “The church has this role of bringing people together, of making them feel like members of a community that is not only religious but, first and foremost, human. It is an opportunity to celebrate life, existence itself. To leave home and meet people, regardless of one’s faith. It’s not an issue, Saint George is of the people.” 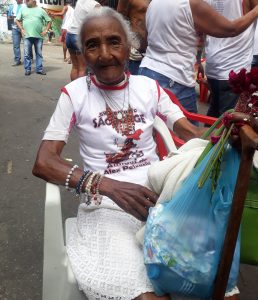 And one person who did leave her house and for the first time participated in the celebration was Dona Teresa Pereira Batista, a 92-year-old resident and devotee. ”He defended me from death. A young man was going to kill me somewhere in Niterói. He pointed the gun at me and I ran away,” she said. “If it were not for Saint George…”

Also on April 23, there was a police operation in which the Military Police Shock Battalion clashed with traffickers and members of organized crime. According to the Military Police, the confrontation ended at around 4:30pm and there were no recorded injuries. There were no records of any impediment or interruption of the celebrations linked to Saint George. The police did not interfere in the events organized by residents.

The police press office affirmed that the Shock Battalion was participating in an ongoing patrol scheme in the region when it was shot at by members of organized crime. At the time no one was arrested. The action took place the day after the arrest of eight Military Police officers from Rocinha’s Pacifying Police Unit (UPP) on suspicion of being involved in the transportation of drugs in a fake ambulance.

Edu Carvalho has been passionate about journalism since he was five years old. Over 19 years he has participated in events like Onda Cidadã no Cariri, the Book Biennial in Rio, and Flip and Flupp, sharing his work portraying the everyday subjects of the place where he lives: the favela of Rocinha. Carvalho is a reporter for the website FavelaDaRocinha.com and a social activist.