Bruno Degenring, 23, Vila Laboriaux resident and Favela Verde (Green Favela) president stands in front of an orderly community garden, stunning views of Rio’s iconic Sugarloaf Mountain behind him. Degenring is briefing a small group of Brazilian and international volunteers who have come to join local Vila Laboriaux residents on Saturday, April 21 to take part in a community garden mutirão, or collective action, as part of the worldwide “Day of Good Deeds” movement. The event is co-organized by local organizations Favela Verde and Caminhos do Lagarto (Lizard Trails). The aim of the mutirão is to revitalize Vila Laboriaux’s agroforestry system, located high up in Rocinha, Rio’s largest favela, on the edge of the Tijuca Forest. 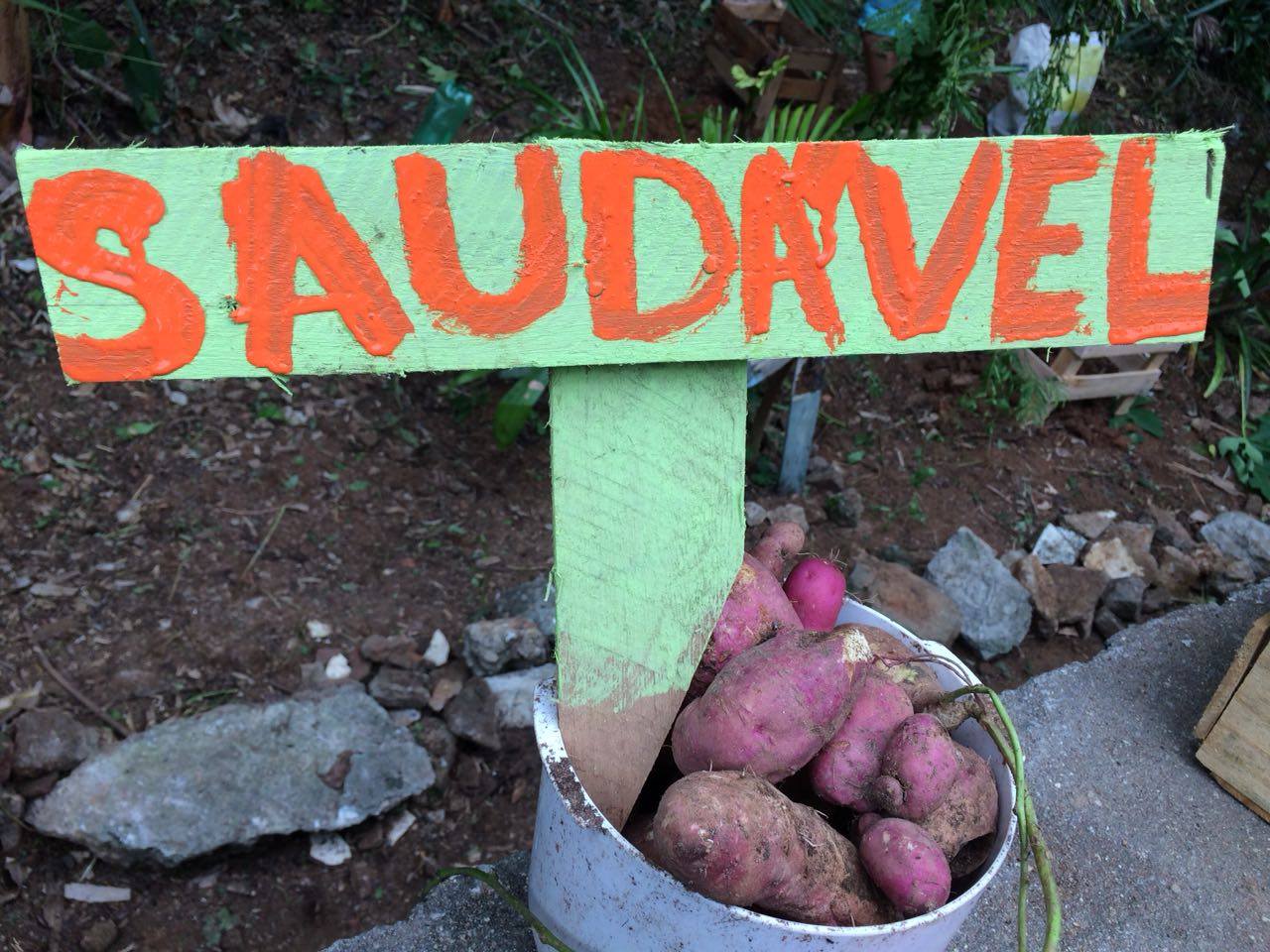 Degenring shares some of Vila Laboriaux’s history with the group, including the devastating landslides in 2010 and the ongoing collective and community actions that the small neighborhood is known for, with a focus on sustainability and integration with the surrounding natural landscape. Favela Verde started operating in 2012 in Vila Laboriaux, consulting with the community to implement a number of projects including an environmentally-focused children’s film club, a compost toilet, community gardens, and a solar energy project (which has since fallen into disuse). Favela Verde was originally externally run, attracting a large number of foreign volunteers but limited local participation. Degenring explains how, as the project gained momentum in 2014 and 2015, more local residents joined the organization, ultimately leading to the community taking over leadership, as residents felt that autonomy was a necessary step for the organization to continue operating in the community.

Degenring is joined by Rafaela Rodrigues, 25, who runs Caminhos do Lagarto, “the right arm” of Favela Verde. Rodrigues has lived in Rocinha her whole life and explains how excited she was when she first found out about Favela Verde, as it perfectly represented her passion for nature and sustainability: “It is important for us to care for our community. To have organic products, from our own land, sell it here and in this way benefit the community… like a cycle… sell compost, use it to plant, distribute to the community.” Rodrigues describes the hiking tours run by Caminhos do Lagarto, which include meditation and learning about medicinal plants.

Currently, Vila Laboriaux boasts two community garden spaces—the first is fully functional and located on land where houses once stood before the 2010 landslides and the second one, the agroforestry system, is the focus of the day’s collective action. The approximately 60-by-4-meter agricultural space is located close to Vila Laboriaux’s community water source and right in front of a Pacifying Police Unit (UPP) station. After Rodrigues and Degenring’s briefing, there is time for a cup of coffee and breakfast of fruit and muffins before the work gets started. Local volunteers take the lead, explaining what needs to be done and handing out tools, gloves, and insect repellent. 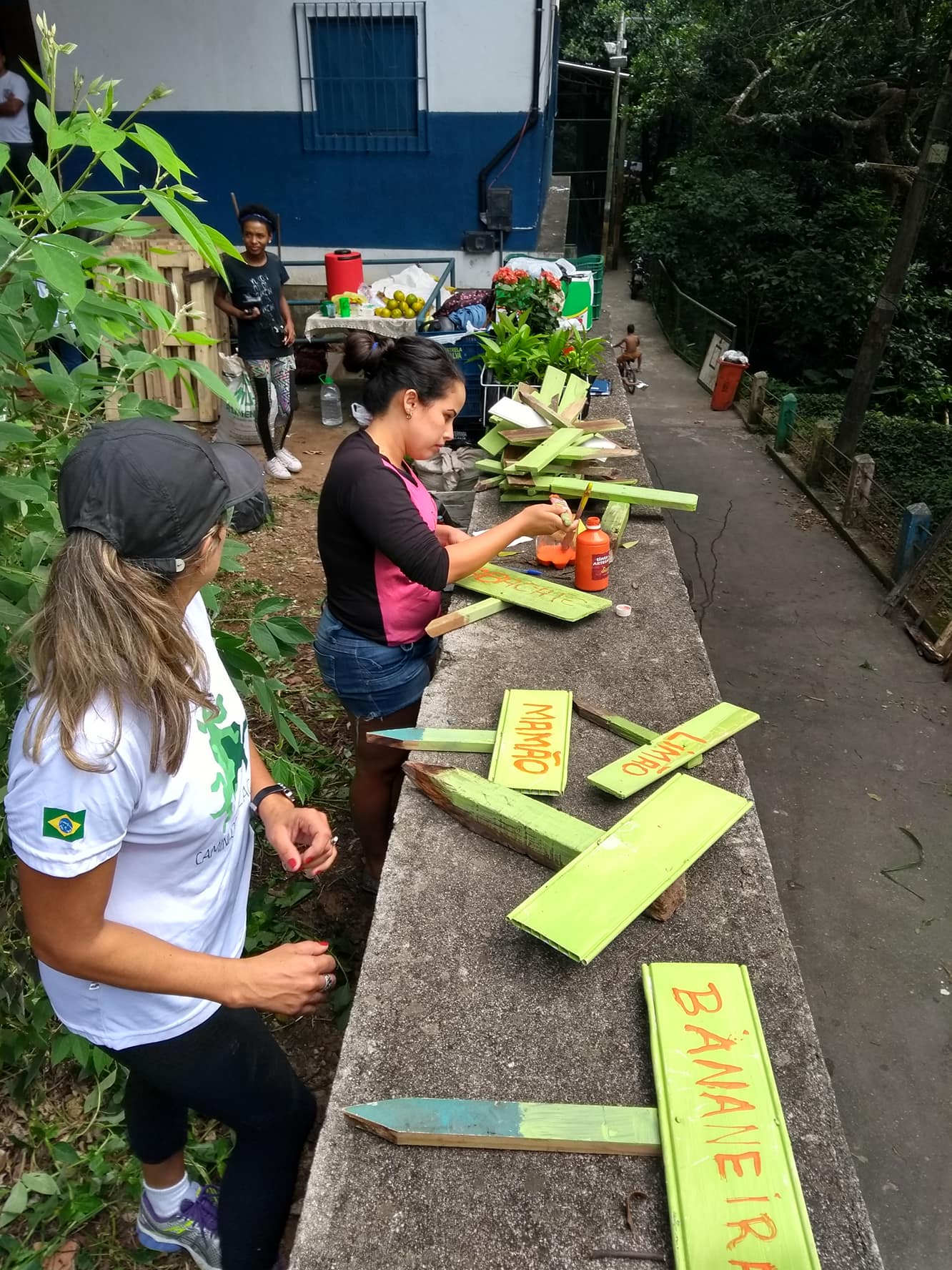 Around 25 volunteers, joined by scores of curious children, work together for around three hours to clear the dense undergrowth, which then exposes hundreds of rocks which need to removed, along with dead banana tree stumps and bags and bags of plastic garbage. Once the clean up stage is complete, the group starts to work on new installations. A new two-part composting station is built using wooden pallets; the compost will be used at the site with the excess being sold for profit. A walking path is cleared and the rocks that were previously cleared are used to demarcate the path from the agricultural area, which includes guava, lemon trees, dragonfruit, acerola, banana trees, palm trees, sweet potato, and much more. New fruit trees, vegetables, and seedlings, some of which have been donated, are planted. Signs are painted and installed to mark out the names of the trees and plants and to better enable caretaking and harvesting. After seven hours of hard work under a hot sun and plenty of insect bites, the day is considered a huge success. The space has been transformed into a functional agricultural space which will provide locally-grown organic produce to the community.

One of Favela Verde’s greatest future challenges is getting more local residents to support the agricultural projects. One resident, volunteering on the day, notes that people clearly appreciate the space, coming to the garden to pick produce, but don’t always stay to help work on maintaining the space. Degenring believes that the biggest barrier for local people is time: “People have other priorities… Moms and dads have to work, look after the kids, they don’t have a lot of time to get involved in social projects.”

Both Degenring and Rodrigues have big plans in the works for their community, including getting the hiking trail officially registered, opening up an organic, locally-sourced café and bazaar, and converting the possibly soon-to-be-abandoned UPP station into an education and eco-tourism center. With the announcement in February that some UPPs will be withdrawn from favelas followed by more recent confirmation by military intervention leaders that some will be shut down or restructured, many community groups are eager to take over these spaces for social interventions, with Favela Cineclub in Providência also hoping to convert Providência’s UPP base into a community space. Rodrigues states that “in the future, we want to occupy the UPP… When they leave, we want to open an educational center, a site for tourism, so that people can get to know the area and hike the trails.”