It has been nearly one month since the Landless Workers’ Movement (MTST) first occupied a parcel of land on the edge of the Washington Luís highway in the neighborhood of Sapê, in Rio’s sister city across the bay, Niterói. What started as a small encampment with a few tents, a makeshift kitchen, and a bathroom has grown into a bustling settlement. The current occupation, which now houses over 130 families, is the second of its kind to occur in Niterói in the last three years. The first occupation, which began on April 6, 2015, was an attempt to hold the local government accountable to its promise to help those who lost their homes in 2010 in the Bumba favela landslide catastrophe to rebuild. As a result of the 2015 occupation, the municipal government designated a plot of land in Sapê for the construction of houses for the victims of the landslides, and reaffirmed its intent to help in this process. However, political turmoil both locally and nationally stymied the negotiations, and construction never started.

The lack of action on the part of the municipal government is what led the MTST to “reoccupy” on April 6, the eighth anniversary of the catastrophe in Niterói and three years after the movement’s first occupation in Sapê. For Fabiola Oliveira, who became involved with the MTST during the first occupation in 2015, the decision to reoccupy was obvious. “We are poor, the majority of us are black, and we are organized, and in a city like Niterói with a large concentration of wealthy people, we are making the municipal government suffer from the pressure [of our occupation].” The results of the collective action are evident; it took only three days for the City to restart negotiations with the MTST.

Oliveira makes it clear, however, that the fight for housing in Niterói is but one piece of a larger struggle, one that seeks to realize the basic rights of citizens and communities that have been neglected by the local government. “If we were to only fight for houses for people, we would provide the house, but they would continue to live without education, healthcare, water, and sewerage. Without the things that are basic rights. The occupation is a bridge to a home, but it is also a school of politics.” 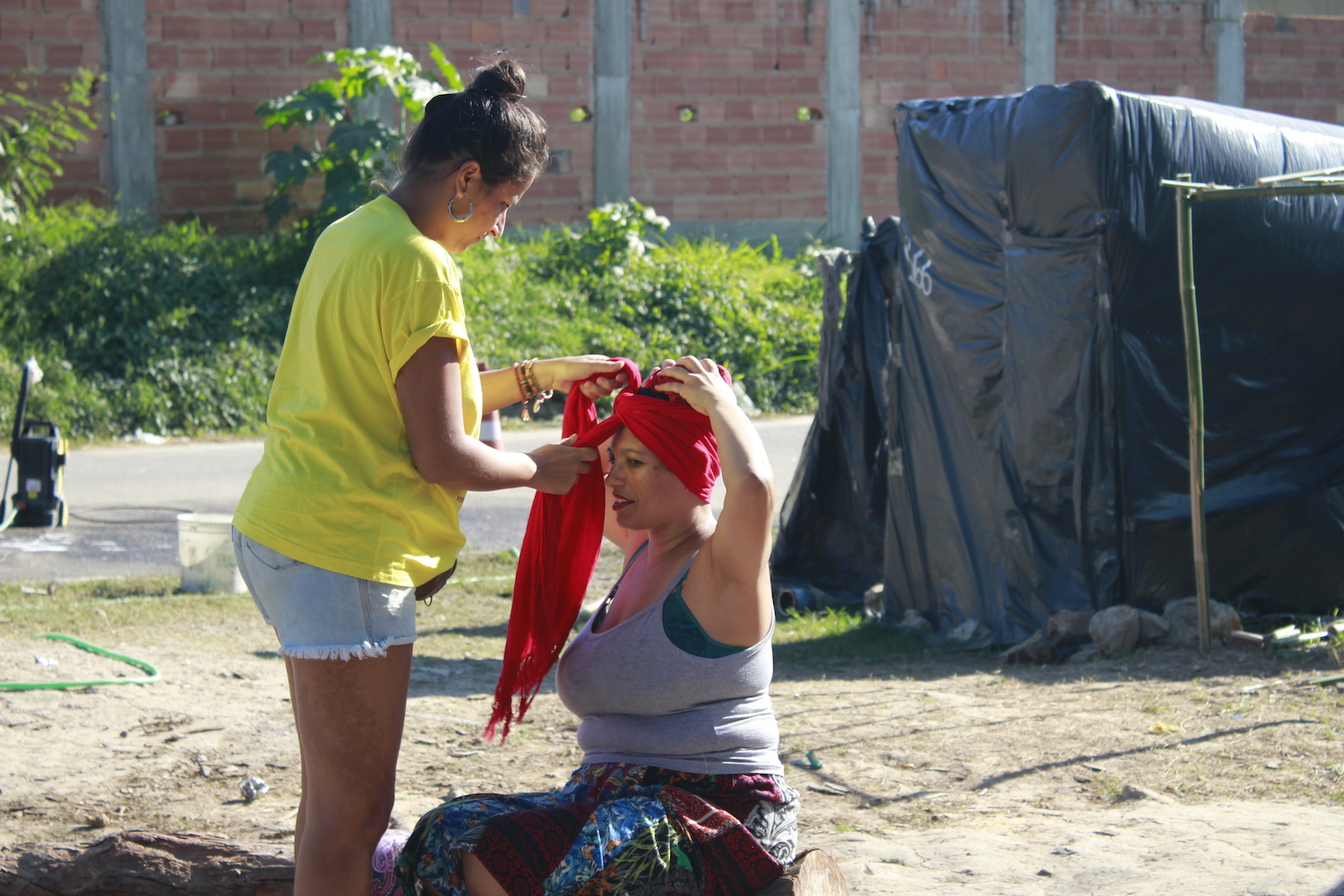 The occupation, with its dozens of tents, children running and playing, and communal kitchen, is a manifestation of this ideology. The planning of the encampment, repairing damaged tents, and cooking meals are collective tasks, and every night residents hold an assembly to discuss current issues and resolve disputes. While the occupation has its own internal organization and infrastructure, it is far from isolated from the surrounding communities. Many of the participants work during the day and return to the occupation in the evening, and leaders have organized educational opportunities for children and numerous musical and theatrical events for the occupants to enjoy.

Recently the occupation hosted Coletivo Madalena-Anastácia, a Theater of the Oppressed collective formed by black women that performed for the residents. They performed in front of a banner with the words “Marielle Presente” in homage to Rio city councillor Marielle Franco who was assassinated on March 14. The performance explored the difficulties and complexities of living as black women in a society that so often attempts to silence them through violence, and called upon members of the crowd to share their personal stories and engage in an open debate. Following the performance, the theater collective facilitated a conversation circle for the women who watched and participated in the show. Afterwards, Oliveira discussed the impact of making performances such as the afternoon’s show accessible to the people of the occupation. “It is so important to bring culture to the people here, because it is reinforced that the poor only need to work, that they don’t need recreation, they cannot bring their child to the cinema, or the theater, which is very expensive and is outside of our reality.”

This reality is what the occupation is trying to change, and while the fight to provide housing for the victims of the catastrophe in Niterói has been long, those who have been struggling for the past eight years still have hope. The negotiations that have been reignited with the municipal government are a source of optimism, and a confirmation of the efficacy of the occupation. As Oliveira observes, “the organized fight will always bear fruit… We are taught that the only thing that will change Brazil is to vote, and for me this is a big lie. If we are not part of the political processes that exist in our cities we will not make political change. This is what the occupation is [about] beyond housing.”