On Wednesday, May 2, seven of City Councillor Marielle Franco’s bills went to vote in Rio de Janeiro’s City Council. With the galleries full and incredible public support, five proposed bills were approved in the first session of voting, one has been postponed, and one has been delayed until technical changes are made.

The session, which was slated to begin at 2:30pm, got underway only at 4pm, after screams of protest from the galleries criticizing the absence of city councillors. The session, which began as an initiative by members of Marielle Franco’s mandate and her party, the Socialism and Freedom Party (PSOL) bench, was launched by Tarcísio Motta (PSOL). Tarcísio opened the session with an emotional speech, highlighting the importance of the moment for a political response to the brutal assassination of the councillor and for the composition of new public policies for Rio de Janeiro.

The first vote was in reference to PL 17/2017 Owl Space, authored by Marielle Franco and Tarcísio Motta, proposing a free nocturnal space for the care of children whose mothers work during overnight hours. The objective of the initiative was to allow mothers to attend work and studies at night while providing a safe space for children. This bill was especially important for women who work double shifts, and who do not always have the ability to continue their studies or remain in their jobs because they lack someone to care for their children. After applause, the bill was approved and will continue to be refined over two weeks with suggestions from other council members.

Soon after, another bill was put to vote – PL 72/2017 Day of the Fight against Homophobia, Lesbophobia, Biphobia, and Transphobia. This bill has the objective of designating a date to honor the fight against oppressions that the LGBT community faces, in the country with the largest number of murders against LGBT individuals. Councilman Cláudio Castro (PSC) asked that “as agreed, I request a postponement by one session”. The majority of the assembly voted to postpone the vote, and so, to much booing from the audience, an announcement was made that the bill would not go to vote. Speaking about the difficulty of advancing the debate regarding the issue, David Miranda (PSOL), a LGBT councilman from Rio de Janeiro, stated:

“Well, I am the only LGBT member in this house, and so I need to say something about this. Marielle was LGBT, inside this House here. She was a companion in the fight, and this bill being postponed in this session, so that we cannot vote on it here with the whole world waiting–I am certain that this audience is full of LGBT members–is difficult, but we made an agreement, and we must stick to this agreement. I make this promise with all of you that I will sit with all of the council members and we will converse, and we will revisit this bill another day, and I will bring this bill to be approved here, in this House. It is unacceptable that last year, Marielle brought the Day of Lesbian Visibility to vote here, and it was not passed.”

The third bill put to vote was PL 103/2017 Day of Tereza de Benguela and the Black Woman, which will designate a day of the year to recognize the historical and cultural significance of Tereza de Benguela and the memory of the black woman in Brazil. Tereza Benguela, an icon of black resistance in the country, led the Quilombo de Quariterê in the resistance against slavery until she was captured by soldiers. The bill was approved in the session and represents an important victory in the black feminist movement to revive Tereza de Benguela’s memory as political transformation.

“I wanted, instead of using my own words, to use the words of Councillor Marielle Franco in justifying this bill. The history of the city of Rio de Janeiro is permeated and pierced by the history of African and black slavery in Brazil. In the cradle of Little Africa, in Rio’s Port zone, black people and Africans came on slave ships and disembarked to be sold… The importance of a day to celebrate black women can be seen in historical writings, and in the official statistics of IBGE (Brazil’s census bureau). According to the institute, 71% of black women are in occupations that are precarious and informal, as compared to 54% of white women and 48% of white men. The median salary of the black woman continues to be half that of a white woman. When the education of a black woman is similar to that of a white woman, the salary differential is 40%”, commented Renato Cinco (PSOL) regarding the proposed bill.

PL 417/2017 Harassment is not Fleeting, which proposes a marketing campaign on public transit across Rio de Janeiro to raise awareness of violence against women, was the fourth bill put to vote. In the proposal, three types of posters were proposed to be placed in various forms of transportation: “Transport is public. The bodies of women are not! In case of sexual harassment, report it. Call 180”, “To come and go is a right. To respect me is your duty! Sexual harassment is a crime. Report it. Call 180”, and “Without consent, it’s violence. Respect women. Violence against a woman is a crime. Report it. Call 180″. The bill was the third approved in the session, with an absolute majority.

The following bill, PL 515/2017 Establishment of Socio-educational Measures in Half Open Spaces, was authored by Marielle Franco (PSOL), Tarcísio Motta (PSOL), Leonel Brizola (PSOL), and Célio Lupparelli (DEM). The proposal was brought to a nominal vote by the session. The proposal called for the legal responsibility of the city to create effective socio-educational measures for adolescents in half open spaces (Assisted Freedom and Provision of Community Services), as imposed by the Judiciary. Thus, the bill aims to stimulate the introduction and reintroduction of convicted adolescents into the educational system and job market.

During the nominal vote, four councillors initially voted against the bill: Rosa Fernandes (PMDB), Jones Moura (PSD), Carlos Bolsonaro (PSC), and Leandro Lyra (NOVO). After many boos and a great deal of popular pressure, Rosa Fernandes (PMDB) and Jones Moura (PSD) changed their votes to be in favor. Thus the bill was approved by the majority, with only two votes against by the end.

Next came a vote on PL 555/2017 Rio Women’s Dossier which proposes to further elaborate on the previously periodic statistics collected regarding the outcomes of women in the areas of health, social assistance, and human rights. These data would serve to support the establishment of public policies that seek to protect women. The proposal was taken to vote, and approved without a nominal vote.

Finally came a bill by six female councillors to name the Rio City Council’s voting hall after Marielle Franco. The six councillors are the only women among the 51 councillors in Rio, showing the gender imbalance in the Council’s makeup and the domination of political decision-making by mostly white men. Marielle would was the seventh council woman, but she was brutally assassinated on March 14 of this year.

The bill was contested by Councillor Otoni de Paulo (PSC), who was the only individual to vote against the measure during the nominal vote. Despite the clear majority, the moment of voting was rife with conflict. To many boos and shouts of protest, de Paula suggested that “it is irrational to vote on the bill now” since the investigations were still not finalized, thus implying doubt about the nature of the murder as political, in spite of all of the evidence and characteristics of the crime. At this point all audience members stood up and turned their backs to the councillors, as a form of contesting and opposing de Paula’s words. 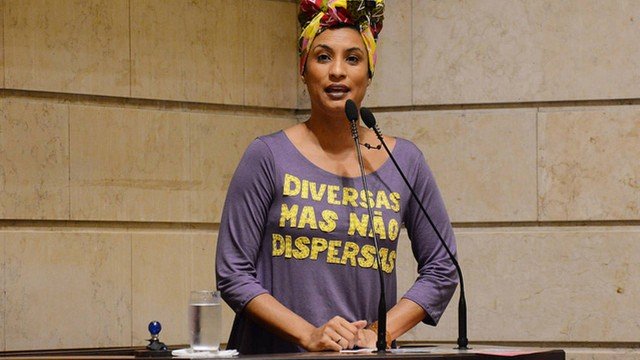