For the last four years the Community Communications Agency Fala Manguinhos! has functioned as a megaphone that amplifies the voices of Complexo de Manguinhos residents both within and outside the favela. Edilano Cavalcante, who has been involved since the initiative’s beginnings and serves as its coordinator, always emphasizes the megaphone image that illustrates the platform’s Communications Working Group’s announcements: “The community sees that it has a voice! Fala Manguinhos! is the megaphone.” 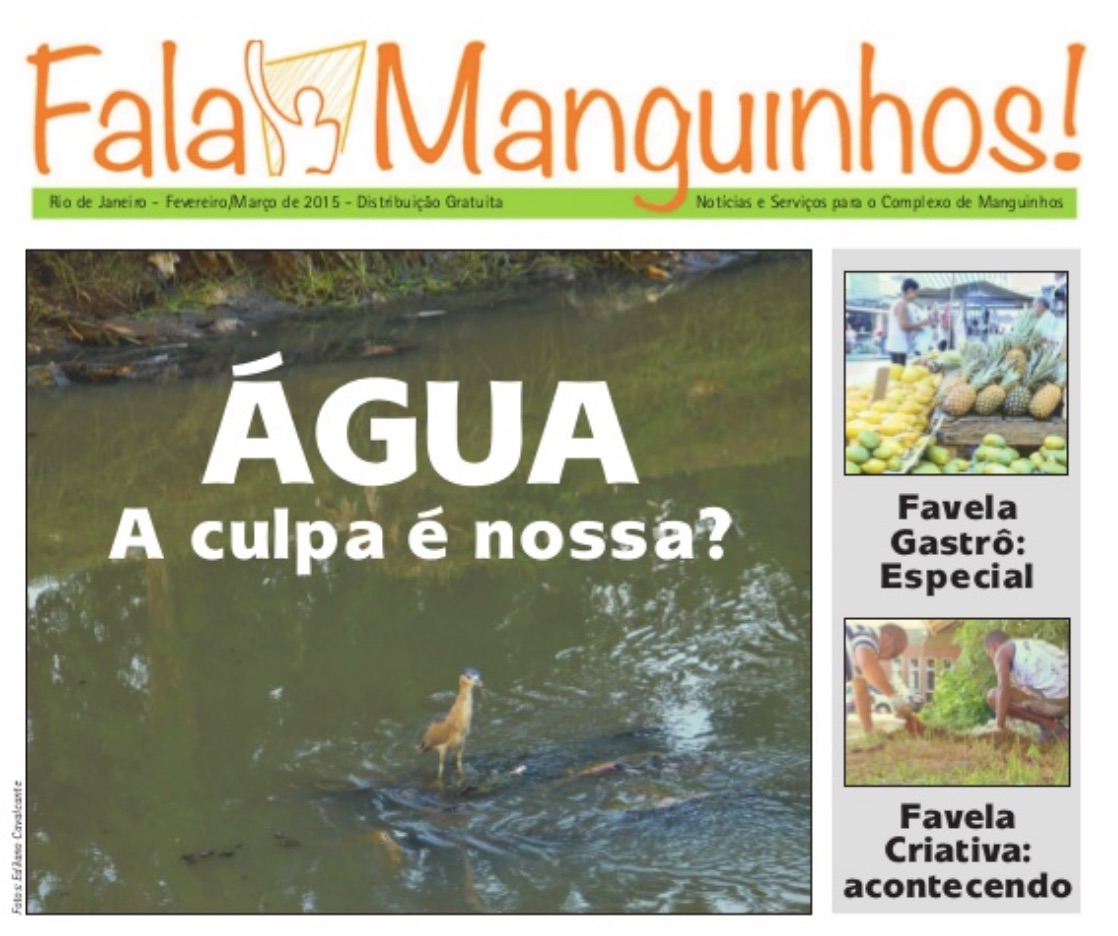 Emerging from the meetings of the Communications Working Group, the community newspaper Fala Manguinhos! was created to defend human and environmental rights and promote citizenship and health. “The objective of the newspaper, first and foremost, was to show residents that there are also good things happening in Manguinhos. Because the mass media only shows the bad side and its problems,” explains Renata Dutra, who was until recently a journalist for Fala Manguinhos!. Due to the military occupation, however, the initiative became a portal for security-related information as well. According to Dutra, “our intent is to show good things, but now with these shootings and confrontations we need to report these incidents as well, so people don’t leave their houses in the middle of a shootout.” 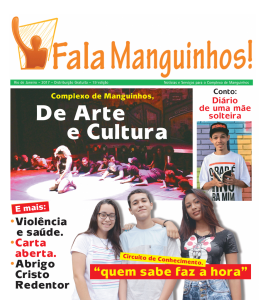 These notices are shared on the Fala Manguinhos! Facebook page, which has more than 21,000 followers, and also on the Fala Manguinhos! website. “On the site we put all the content we produce, written by ourselves. On Facebook we share this work as well and other content we find relevant, like employment opportunities, free courses, health campaigns. These are updated daily in addition to what happens in the community,” Cavalcante says.

In the past year, the group had to stop circulating the print newspaper because of a lack of financial resources. The coordinator laments: “We used to deliver the newspaper door to door, bimonthly. We heard straight from the residents what they thought of the previous issue. It was a marvelous experience.” For him, the print newspaper provides a memory of Manguinhos’ history since the publication is “speaking about the history of these people, which would otherwise go unregistered. The mass media is not interested in recording our history, our daily routines. Our history would not have importance, interest, or impact for anyone. Time would pass but there wouldn’t be a way to witness what happened because it wasn’t important.” Moreover, Cavalcante points out, not everyone in the world has Internet access.

This also constitutes a challenge for the journalists who write articles for Fala Manguinhos!. Cavalcante has to ensure they have access to the Internet and a computer. He says the difficult financial situation is becoming the group’s biggest challenge, as it’s not possible to provide infrastructure and compensation for the ten people who make up the Fala Manguinhos! team.

Many of those team members participated in the community communicators workshop that the Agency offers for interested Manguinhos residents. The schedule of when workshops will be offered is published on Facebook. The idea is to cultivate future journalists so that Fala Manguinhos! can operate in a sustainable manner in the future. Cavalcante, who studies cinema, explains that “the idea of the workshops is to provide basic training in writing and photography, as well as training in how to critically analyze what one reads and writes.” He highlights that it is fundamental for participants to gain the skills to analyze mainstream media content critically, and to ensure that other points of view are represented in their own writing. The workshops’ objective is to make residents aware that what they read is not the only truth and, thus, to build a plurality of voices. Through projects like Fala Cine, the initiative tries to fortify reflective dialogue among Manguinhos residents through films and discussions, in addition to opening up spaces for artists’ exhibitions.

Through a partnership of publishing articles on RioOnWatch, Fala Manguinhos! is able to reach beyond the boundaries of the favela and even the country to show what is important for Manguinhos and its residents. “If we could create a network [of community media in favelas], it would be of infinite value; to have many communicators with a focus on speaking about public policies in favelas. Because the problem is not individual, and it’s not only Manguinhos’ problem—it is a problem for all favelas,” the coordinator argues. He therefore proposes collaborative work: “If we have links among the [community] media, when the problem is in Rocinha, Manguinhos will speak out, Alemão will speak out, we’ll all speak out together, we’ll investigate together. The impact would be much bigger if the residents of various places perceived that the problem is not specific to Rocinha. It may specifically impact Rocinha today, but it will happen again [somewhere else] tomorrow.”

Going forward, Fala Manguinhos! wants to build more partnerships in order to obtain a fixed place for meetings and a place for logistical activities like accessing the Internet and computers and storing materials. The team’s dream is that one day they’ll be able to make a living as community communicators receiving adequate salaries that reflect the importance of popular communication in Manguinhos, carried out by the megaphone that is Fala Manguinhos!.